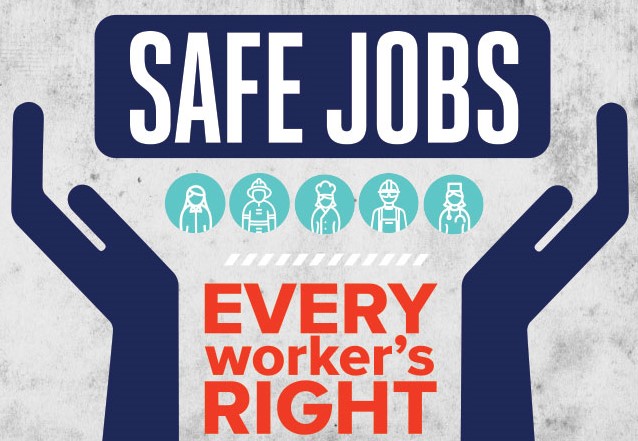 (WASHINGTON, D.C.) - The National AFL-CIO is calling on the Biden Administration to take action to strengthen Federal enforcement of Workplace Safety Standards, on the heels of a report showing more than 5,300 workers died on the job in 2019.

The report the Labor Organization released at a virtual press conference found workplace deaths rose slightly in 2019, according to the most recent data from the Bureau of Labor Statistics (BLS), though the rate of injuries per 100,000 Workers remained steady.

National AFL-CIO Secretary-Treasurer Liz Shuler said the U.S. Occupational Safety and Health Administration's (OSHA) power eroded under the administration of Republican President Donald Trump and she is hopeful President Joe Biden will help lead the agency to take a more forceful stance: "Obviously, we'd like to rebuild the agency and the commitment does come from the top."

She pointed specifically to the Protecting America's Workers Act, which would give OSHA more tools to pursue workplace safety violations.

"($12,000) is the average (penalty) for killing a Worker and there certainly need to be more strict penalties," Reindel said.

According to the report, car crashes and other transportation-related incidents accounted for 40% of workplaces deaths in 2019, with falls and slips the second-leading cause.

Deaths from incidents of workplace violence ticked up to 841 in 2019 and became the third-leading cause of workplace deaths, according to the report.

The report does not include data on Workers who died from long-term occupational diseases tied to their jobs, though it pointed to estimates that put that number around 95,000 each year.

The report noted the number of Inspectors employed by OSHA fell to its lowest level in the agency's 50-year history in 2019, even as the number of workplaces and Workers have increased.

Based on 2019 staffing and inspection levels at OSHA, the National AFL-CIO report said the agency would be able to inspect every workplace under its jurisdiction once every 162 years.

While the number of inspections did not decline during the Trump Administration, the report said the agency did not conduct as many of the more time-intensive inspections of significant hazards in Fiscal Year 2019 than it did in the past.

Though the report focused on data from 2019, it also shined a spotlight on the toll the Coronavirus Pandemic has taken on Workers in the United States.

The report acknowledged that there is not a national system for tracking the spread of the virus in workplaces, but it noted that data from the Centers for Medicare and Medicaid Services tracking Nursing Home Staff showed at least 563,000 confirmed COVID-19 cases and more than 1,800 deaths.

Union Leaders have been critical of OSHA during the pandemic for not putting in place an Emergency Temporary Standard imposing new requirements on employers to limit the spread of COVID-19.

To Continue Reading This Labor News Story, Go To: www.law360.com/publicpolicy/articles/1381291/afl-cio-demands-osha-boost-after-worker-deaths-report