Published Wednesday, May 5, 2021
by Steve Wishnia/LaborPress.org 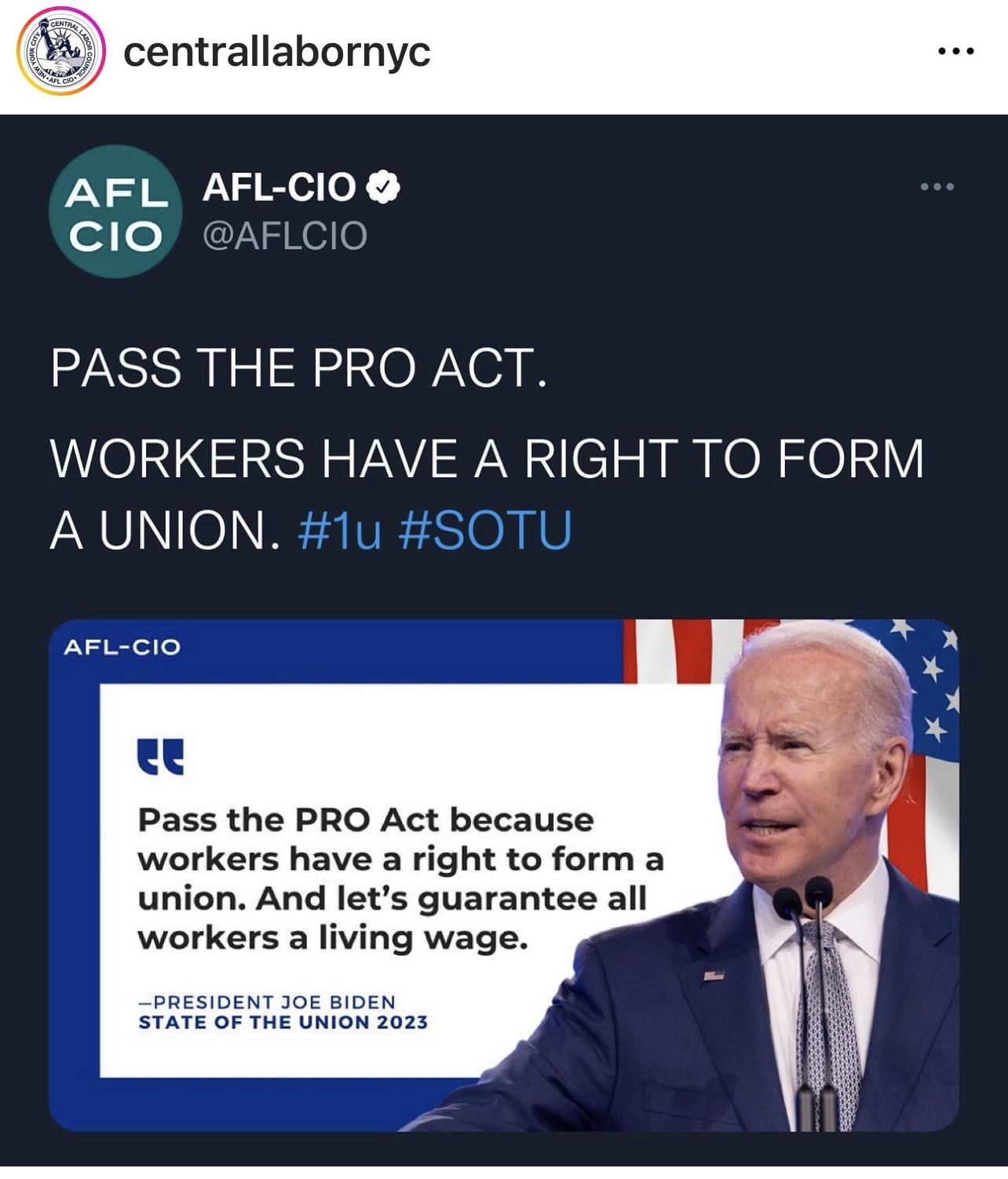 (NEW YORK CITY) - Well over 100 people rallied in front of Senate Majority Leader Charles Schumer’s Manhattan Offices in New York City over the weekend as part of a week of more than 700 events that called on the Senate to pass the Protecting the Right to Organize (PRO) Act.

“This is not a rally against Schumer.  It’s in support of the PRO Act,” Freddy Bastone of Building Trades for Workers Democracy told LaborPress. “Schumer says he’s going to push this.  We want to make sure it happens.”

“What we want to do is to fight for it,” Percy Lujan of Laborers Local 78 told the rally.

Hawley has made some rhetorical noises about being Pro-Labor, but as Missouri Attorney General, he supported the state’s 2017 so-called Right-To-Work (for less) Law banning the Union Shop, which was repealed by voters in 2018.

The PRO Act, which the House passed by a 225-to-209 vote on March 9th, contains a host of provisions intended to make it easier for Workers to form and sustain Unions.

Bastone told the rally that it would be “the most transformative piece of Federal Legislation in the last forty years” and would allow Workers to win Union Representation if a majority signed cards.  It would also outlaw “Captive Audience Meetings” where Workers have to listen to Anti-Union messages, establish penalties for employers who fire Union Supporters, prohibit the permanent replacement of Strikers and repeal the parts of the Taft-Hartley Act of 1947 that ban “Secondary Boycotts” and allow states to prohibit the Union Shop.

The PRO Act would outlaw employers’ worst Union-Busting abuses, said Troy Walcott, a Local 3 Member who’s now been on Strike at the Spectrum Cable-TV company for more than four years - Spectrum has hired Strikebreakers as permanent replacements, and is using them “to try and decertify a Union they’re not even part of.”

For the Building Trades Unions, repealing the Secondary Boycott ban might be the Bill’s most important provision.

The large construction jobs that are their bread and butter in New York include Workers from multiple Unions and Trades, employed by different subcontractors.

But the Taft-Hartley Act prohibits Unions from going on Strike when the dispute doesn’t involve their direct employer - such as, for example, Electricians or Plumbers refusing to work if a different subcontractor hires Non-Union Laborers or Ironworkers.

“That’s how we have solidarity, Brothers and Sisters,” said Local 3 Member Meg Finn. “We honor each other’s struggles.”

To Continue Reading This Labor News Story, Go To: www.laborpress.org/nyc-building-trades-tell-schumer-get-the-pro-act-passed/