âAs A Country, We Must Renew Our Commitment To Safe Jobs For All Workers And Invest The Resources To Make That Happen.â - New National AFL-CIO Report Shows 275 U.S. Workers Killed Daily 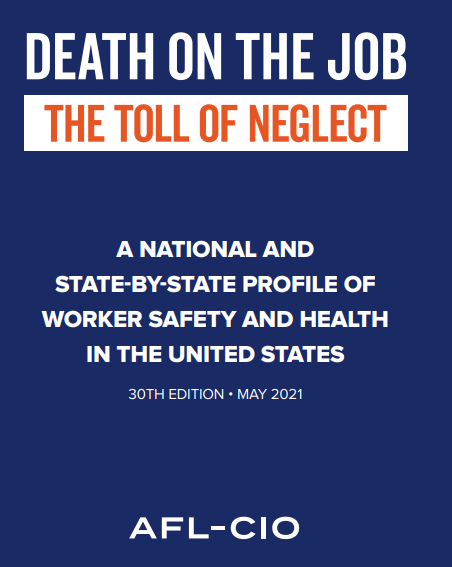 (WASHINGTON, D.C.) - In 2019, 5,333 Working People were killed on the job and an estimated 95,000 died from occupational diseases, according to the 30th edition of the Death On The Job: The Toll Of Neglect Report.

That means every day, on average, 275 U.S. Workers die from hazardous working conditions.

And this was before the devastating COVID-19 Pandemic that has been responsible for far too many Worker infections and deaths in our country, National AFL-CIO Officials said.

“This year, we commemorate fifty years of OSHA (U.S. Occupational Safety and Health Administration) and the lives saved by ensuring Workers are protected on the job,” National AFL-CIO Secretary-Treasurer Liz Shuler said.

“COVID-19 has been a stark reminder that Workplace Safety Protections are absolutely critical, and we still have a long way to go.  As a country, we must renew our commitment to safe jobs for all Workers and invest the resources to make that happen,” Shuler said.

One of the most disturbing statistics is the increase in the death rate for Workers of Color.

The fatality rate for Latino Workers increased 14% from 2018 and is the highest rate since 2008.

The majority (66%) of Latino Workers who died on the job in 2019 were Immigrants.

Black Workers are also at an increased risk of work-related deaths.

It is the third-leading cause of workplace death.

In 2019, deaths increased to 841, while more than 30,000 violence-related lost-time injuries were reported.

Older Workers have a higher risk of dying on the job.

More than one-third of workplace fatalities occurred among Workers 55 and older.

And Workers 65 or older have nearly three times the risk of dying on the job as other Workers.

As we’ve learned over the past 50 years of Worker Protections under the U.S. Occupational Safety and Health Administration (OSHA), oversight keeps Workers safe.

Due in part to the irresponsible Anti-Worker policies of the previous Republican Trump Administration, OSHA’s meager resources have severely declined.

Federal OSHA has only 774 Safety and Health Inspectors and State OSHA plans have a combined 1,024 Inspectors - near the lowest total since the creation of the agency.

Renewed attention and dedicated resources to getting Inspectors back on the job is crucial to fulfilling the promise of safe jobs for all Workers, National AFL-CIO Representatives said.

To View Death On The Job: The Toll Of Neglect Report, Click Here: aflcio.org/reports/death-job-toll-neglect-2021

To Directly Access This Labor News Report, Go To: https://aflcio.org/press/releases/new-afl-cio-report-shows-275-us-workers-killed-daily