CWA Publicly âThanksâ Its Members At St. Joeâs Hospital In Suburban Buffalo âFor All Theyâve Doneâ During The COVID-19 Pandemic As The Medical Facility Now Makes The Transition Into An Out-Patient & Ambulatory Care Center

Published Wednesday, May 5, 2021
by WNYLaborToday.com Staff 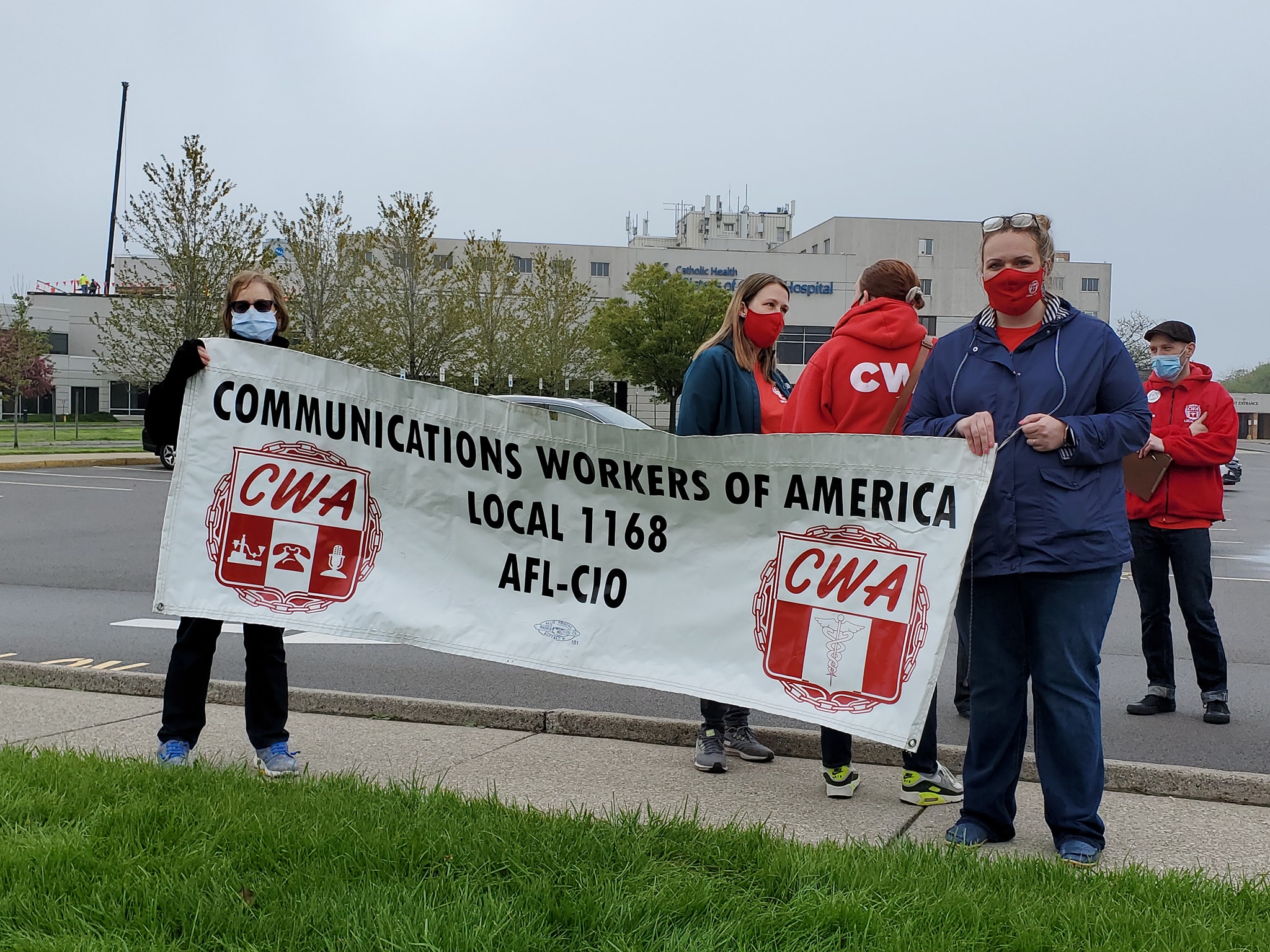 (CHEEKTOWAGA, NEW YORK) – Communications Workers of America (CWA)-represented Employees at the Sisters of Charity-St. Joseph Campus were publicly thanked by their Union for the stellar job they’ve done while the Suburban Cheektowaga Medical Facility was designated as a COVID-19 Center, but lamented the fact Catholic Health management failed to do the same in terms of not only thanking them for a job more than well done, but offering raises to their Essential Workers/Heroes.

A Solidarity Rally was held early Wednesday (May 4th) outside St. Joe’s, which was also supported and attended by a number of Buffalo area Labor Leaders and Representatives, including those from the Amalgamated Transit Union, the Buffalo Musicians Union, the Civil Service Employees Association, the New York State United Teachers, the Operating Engineers, the Teamsters, the Service Employees International Union, the United Steelworkers, United University Professions, the United Food & Commercial Workers Union and the Western New York AFL-CIO Area Labor Council (WNYALF) - as well as the Coalition for Economic Justice.

A flier used to publicize the Solidarity Rally that was posted on the WNYALF’s Facebook page asked the Western New York Labor Community to join with CWA as Catholic Health eliminates services and jobs at St. Joe’s in a show of support for its Members who work there as we thank them for their undying commitment to their patients and the community they serve.

We want them to know they are love and respected by all!, the flier read. 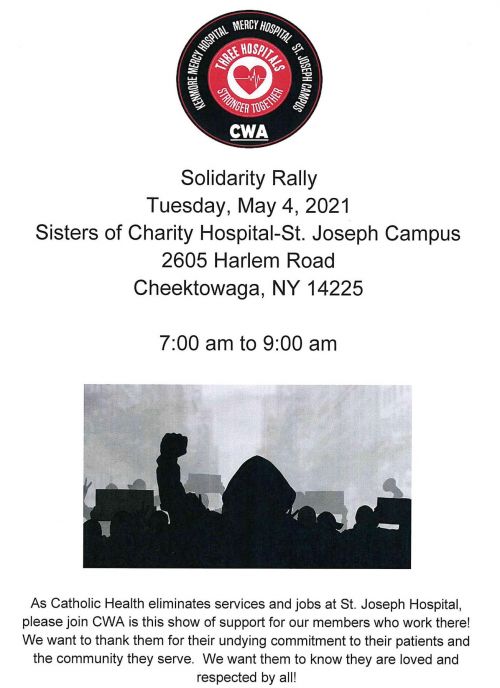 “Our folks ‘really took on this responsibility for all of Western New York’ with the COVID crisis.  St. Joe’s was the ‘only’ facility across New York State ‘that had been dedicated to COVID patients and it was our Members who took care of them for the past fourteen months or so.’  We ‘wanted our Members (who are represented by Locals 1133 and 1168) to know how much (their Union) appreciated them,’” CWA District 1 Area Director Debbie Hayes told WNYLaborToday.com after the rally. “No one ‘really knows how emotional their jobs were and the wear on them.’  It is also ‘sad to see’ St. Joe’s, where our Members have worked for more than thirty years, to change into an acute care facility.  ‘I think it will also be difficult for the Cheektowaga Community’ (to lose the hospital).”

However, the redevelopment of the St. Joe’s Campus into a center for out-patient and ambulatory care meant that around 100 Workers, including Nurses and those in the Dietary, Technical and Service Departments, found themselves without a job at St. Joe’s, CWA Officials said.

They did, however, find employment at other Catholic Health System-run medical operations in the Buffalo area, including at Kenmore Mercy Hospital and at South Buffalo Mercy Hospital, CWA Officials said. 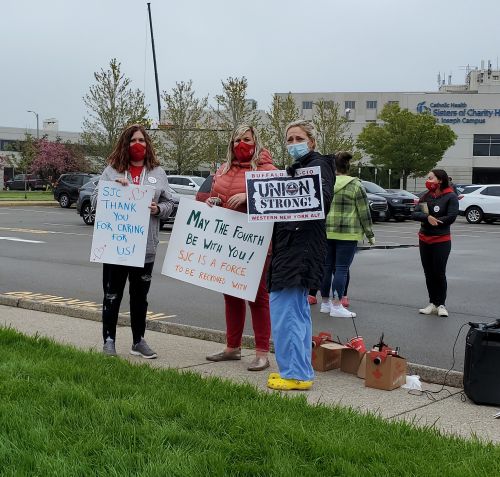 CWA Local 1168 Organizer Dan Gniewecki, who was involved in putting together the Solidarity Rally, said: “We ‘wanted to offer thanks to (the Members at St. Joe’s) from their Union Family’” for their service during the Coronavirus Pandemic and to make sure they found employment.

“Our ‘number one goal has always been keeping them employed,’” he said.  “It ‘was extremely hard for them to work under these circumstances’ (knowing their jobs would be phased out as Catholic Health transitioned the hospital into a medical park).  ‘They should have been provided with Thank You’s and raises’ (from Catholic Health).”

The CWA and Catholic Health are currently in the midst of negotiating a new Master Agreement for 2,500 of its Members who are now covered by six individual contracts.

The old contract, which was extended by 12 months last year due to the Coronavirus Pandemic, expires on June 30th (2021).

An 18-Member CWA Bargaining Team has been in talks with Catholic Health management, primarily via computer, which Hayes tells WNYLaborToday.com “has been difficult.”

“Our (face-to-face) negotiations ‘have been interrupted by COVID and it’s not conducive to having (so many people) in one room, even socially-distanced with masks,’” said Hayes, who also took time to revisit the 30 years of past history at St. Joe’s, where the CWA had a “incredible struggle” to secure a first Union Contact at the suburban hospital and was involved in a major walk from Buffalo to Albany to “keep St. Joe’s open.”

Meanwhile, CWA Local 1168 Organizer Gniewecki told Your On-Line Labor Newspaper that he and CWA Representatives were ecstatic with Tuesday’s strong Labor turnout - and made it a point to say he hoped it was not lost on Catholic Health management that those area Unions and their Leadership are ready to be called upon to further support those CWA-represented Workers who are seeking a fair new contract with their employer, if need be.