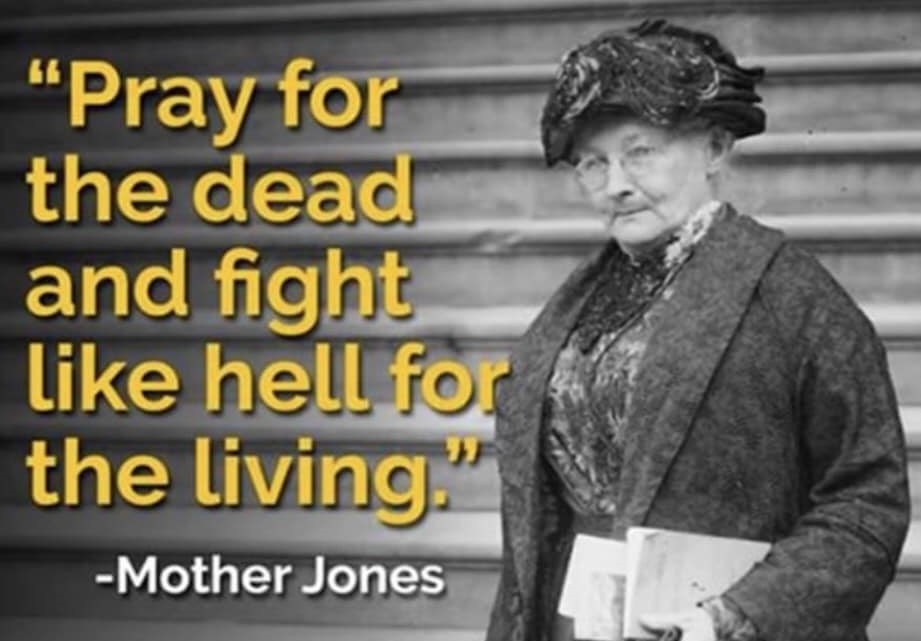 Mother Jones (who was born Mary Harris in1837 and died on November 30th, 1930) was a key radical figure in United States Labor History.

She was a fiery orator, a Union Agitator for Mine Workers, and a Co-Founder of the International Workers of the World (IWW). 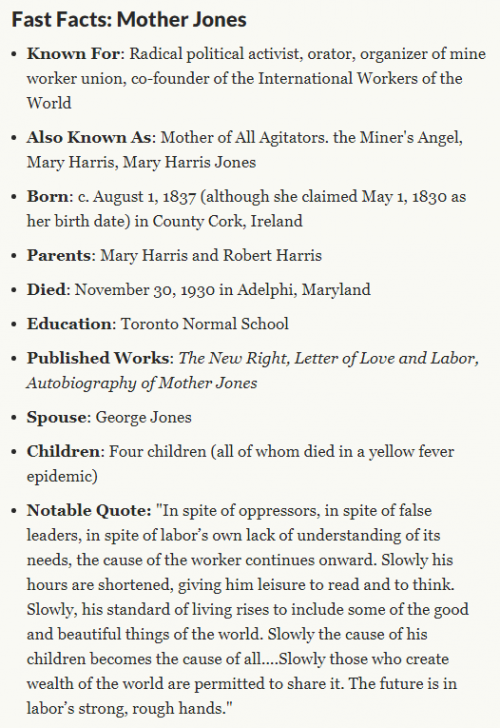 The current-day political magazine Mother Jones was named for her and maintains her legacy of Left-Wing politics.

Early Life: Born Mary Harris in 1837 in County Cork, Ireland, young Mary Harris was the daughter of Mary Harris and Robert Harris.  Her father worked as a hired hand and the family lived on the estate where he worked.  The family followed Robert Harris to America, where he had fled after taking part in a revolt against the landowners.  The family then moved to Canada, where Mary went to public school.

Work & Family: Harris became a School Teacher first in Canada, where, as a Roman Catholic, she could only teach in the parochial schools.  She moved to Maine to teach as a Private Tutor and then to Michigan, where she got a teaching job in a convent.  Harris then moved to Chicago and worked as a Dressmaker.  After two years, she moved to Memphis to teach and met George Jones in 1861.  They married and had four children.  George was an Iron Molder and also worked as a Union Organizer.  During their marriage, he began working full-time in his Union job.  George Jones and all four children died in a Yellow Fever Epidemic in Memphis, Tennessee, in September and October 1867.

Begins Organizing: After the death of her family, Mary Harris Jones moved to Chicago, where she returned to work as a Dressmaker.  Mary claimed that her pull to the Labor Movement increased when she sewed for wealthy Chicago families.  "I would look out of the plate glass windows and see the poor, shivering wretches, jobless and hungry, walking alongside the frozen lake front.  The tropical contrast of their condition with that of the tropical comfort of the people for whom I sewed was painful to me.  My employers seemed neither to notice nor to care."  Tragedy struck Jones' life again in 1871.  She lost her home, shop, and belongings in the Great Chicago Fire.  She had already connected with the secretive Worker's Organization Knights of Labor and was active in speaking for the group and organizing.  After the fire, she left her dressmaking to take up full-time organizing with the Knights.

Increasingly Radical: By the mid-1880s, Mary Jones had left the Knights of Labor, finding them too conservative.  She became involved in more radical organizing by 1890.  A fiery orator, she spoke at the location of strikes around the country.  She helped coordinate hundreds of strikes, including those with Coal Miners in Pennsylvania in 1873 and Railroad Workers in 1877.  She was named often in newspapers as "Mother Jones," a white-haired radical Labor Organizer in her signature black dress, lace collar, and plain head covering.  "Mother Jones" was a loving moniker given her by Workers, grateful for her care of and devotion to Working People.

United Mine Workers & Wobblies: Mother Jones' principally worked with the United Mine Workers, although her role was unofficial.  Among other activist actions, she helped organize strikers' wives.  Often ordered to stay away from Miners, she refused to do so and frequently challenged the armed guards to shoot her.  Mother Jones focused on the issue of child labor as well.  In 1903, Mother Jones led a children's march from Kensington, Pennsylvania to New York to protest child labor to President Roosevelt.  In 1905, Mother Jones was among the founders of the Industrial Workers of the World (IWW, the "Wobblies").  She worked within the political system as well, and was a founder of the Social Democratic Party in 1898.

To Continue Reading This Labor News Report, Go To: www.thoughtco.com/mary-harris-mother-jones-3529786