UnionMadeStickers.com - Canadian Company With A Growing List Of Clients âKeeps An Eye On Buffaloâ For A U.S. Location While Serving An Array Of Unions With âEye-Catching Stickers For Everything From Hard Hats To Windowsâ 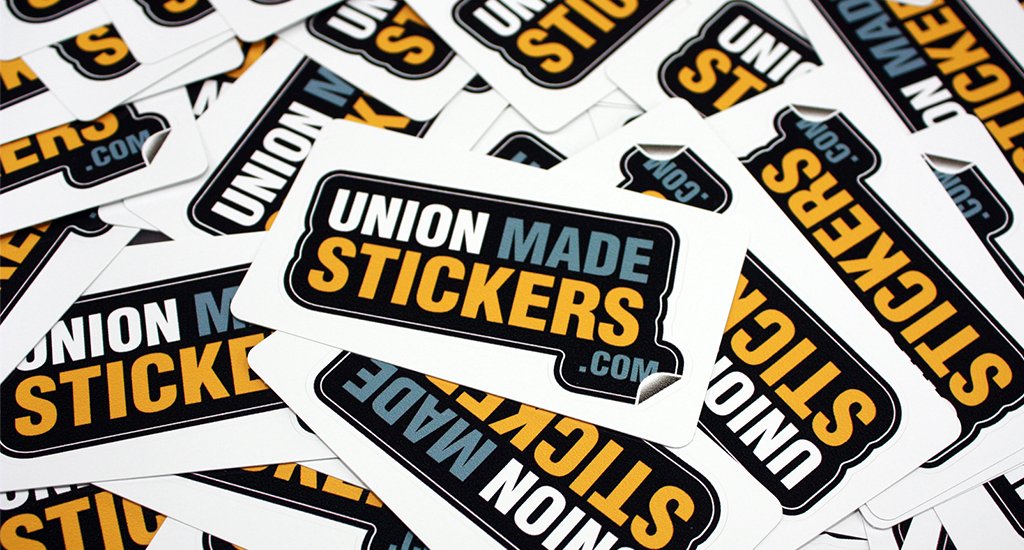 (WELLANDPORT, ONTARIO/CANADA) - If not for the Coronavirus Pandemic, Phil Miller more than likely would have already opened a U.S. plant in Buffalo, but as he continues to keep an eye on what transpires in regards to the reopening of the U.S.-Canadian Border, Miller is content with his UnionMadeStickers.com operation continuing to be busy cranking out thousands of high-quality, Union-made stickers for his growing list of American Labor clients.

Represented by Mississauga, Ontario-based United Food & Commercial Workers (UFCW) Local 175, his seven post-COVID-19 Employees create their Union Magic inside a 3,400-square-foot production and headquarters facility that’s located in Wellandport - about 36 miles west of Buffalo, for more than 700 Union clients, including about 80% that are located on the U.S. side of the border. 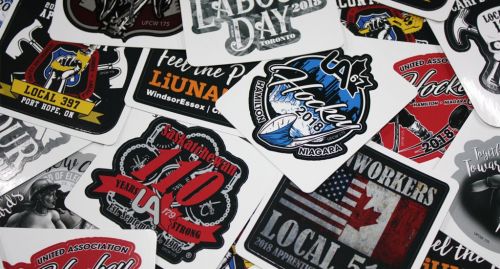 And, Miller’s company was just added to the International Brotherhood of Teamsters’ Preferred Vendor List, a decision that was just made by the decision-makers at the Union’s headquarters in Washington, D.C. - which could further open the doors to serving several hundred more Teamster Locals.

“At first, ‘I didn’t know if I wanted to work with Unions,’” Miller - who was employed in the corporate world as a manager for Microsoft before purchasing UnionMadeStickers 20 years ago from former Union Ironworker Alan Massicotte, tells WNYLaborToday.com.

“But ‘I did my due diligence’ and the person that I bought the company from told me a story about a young man who became a Union Apprentice with the Ironworkers.  ‘They gave him a chance and that resonated with me.’  ‘Unions give people the chance to achieve and it shows in the quality of work they perform.’  ‘That’s what convinced me,’” Miller said.

Miller and his wife, Jane (Pictured Below/Photos Courtesy of UnionMadeStickers), also told Your On-Line Labor Newspaper that the “opportunity to work with Unions, supporting their Members and their families” is especially rewarding. 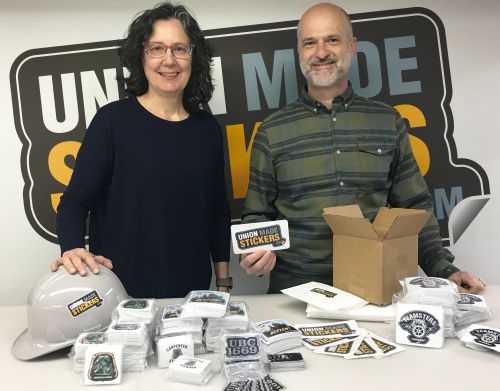 On the company’s website (www.unionmadestickers.com), there’s a statement that reads: A sticker is a simple way to show the world who you are and what you believe in.

It goes on to say: How can you make your Local stand out from the others?  Custom designs.  With our talented art department, we can work with you to create a stunning design specific to your Local Union.  Any sticker, any size, however you imagine it.  We'll work with you to find the best design possible.  The sky is the limit!  Whether you rely on a mascot, a specific type of tool or just want a sticker of your group photo, custom designs help build your brand and convey your local Union's personality.  This is an exclusive design.  No other Union Locals will be allowed to purchase your unique sticker.

“Our ‘big thing’ is that we offer ‘custom’ design,” Miller said.  “And we’ve come up with some ‘pretty cool’ designs (for the company’s Union clientele).  ‘We are absolutely proud, our whole team is, of what we provide.’  Our Staff ‘takes a lot of pride in what they do.’  ‘We come up with the best we can provide’ (Unions and their Members).” 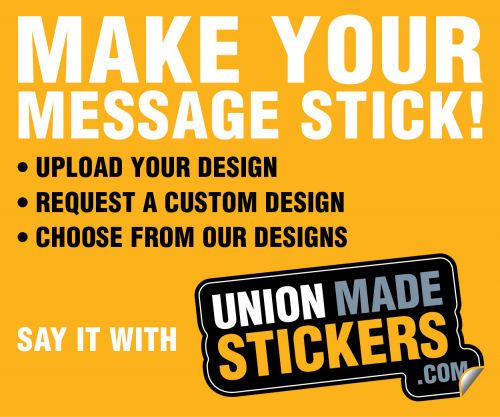 UnionMadeStickers provides a digital proof to a Union client - typically, “the next business day, often earlier,” he adds.  “If we have to make some changes, ‘it’s usually within three days.’  ‘We stay on top of things.’  ‘I’m glad to see where we are.’”

The International Brotherhood of Electrical Workers (IBEW), the Carpenters, the Plumbers and the Sheet Metal Workers can be counted among UnionMadeStickers’ many clients, including Ironworkers Local 40 in New York City, which is a “big client - has been for well over ten years,” Miller says.

“I found them through a Google search,” admitted IBEW Local 567 Organizer Denis Lehouillier. “They ‘custom-designed’ our sticker, which featured a lighthouse in Portland.  They ran (500) off for us and they went so quick, we ordered another (round).” 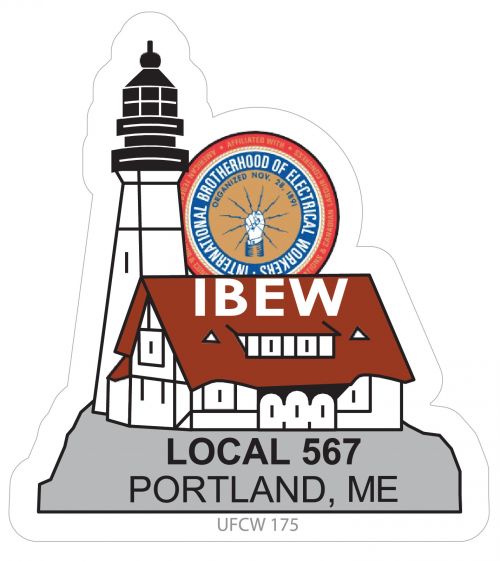 “It was ‘very easy’ working with them,” Lehouillier said of UnionMadeStickers.  “They were ‘quick’ and our Members ‘loved them’ (the stickers).  We hand them out on jobsites.  And we have other IBEW Members from other Locals across (the U.S.) who stop in while they’re on vacation (in the Portland area) who ask for one for their (Local Union sticker) collections.”

Lehouillier has “recommended” UnionMadeStickers to other IBEW Locals in the U.S. - even though the company is Canadian-based and not yet in the U.S.

Asked why, he answered: “(because) the IBEW is in Canada too.  I look at them as our ‘northern’ Brothers and Sisters.”

SMART Local 565 Business Manager Jesse Buell said it was through his International that he found UnionMadeStickers.

“They pointed me in their direction,” he said. “We ordered stickers for our Members’ hard hats.  They were ‘really good - better than I expected.’  They were ‘personable and got me everything I asked for.’  ‘I couldn’t have done any better - and, for sure, I would recommend them.”

A Union can easily upload its design, request one from UnionMadeStickers or browse the many unique designs of its own that are featured on its website.

UnionMadeStickers’ designs are created with Union Locals in mind with each piece that’s developed so that particular Union’s information can easily be dropped into place prior to printing. 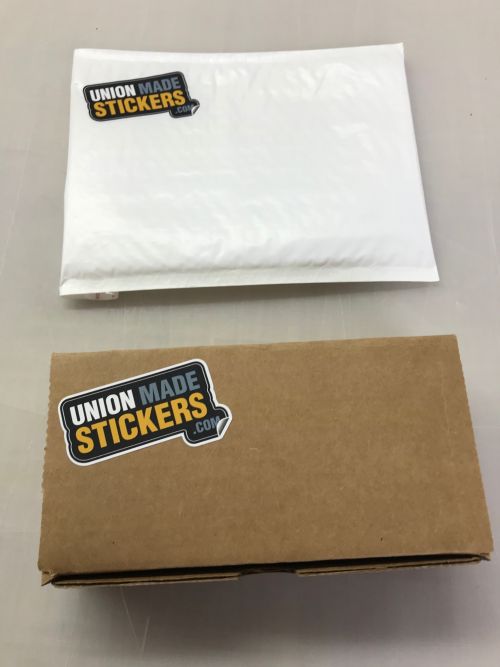 When UnionMadeStickers creates an individual piece of artwork, they use generic Union logos and a number of X’s in place of the Local’s numbers so the Union’s Representatives can see a close estimation of their final product. 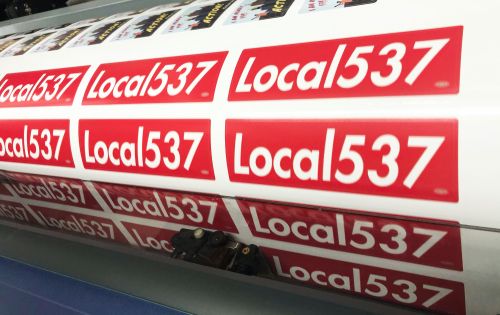 UnionMadeStickers also uses a variety of general and vinyl materials to make an array of stickers for a variety of uses, from hard hats to lunch boxes to windows, packages and vehicles.

And the company uses reflective materials to make their Union stickers, as well as clear-matted materials so they can be adhered to glass and “where you can just see the image,” Miller says.

After placing an order on-line, the Union receives a digital sample of the final artwork with their specific information that’s integrated into the layout.

Miller also points out that since the orders are coming from north of the border, standard shipping to the U.S. is included in all pricing of orders of $50 or more.

However, shipments outside of Canada and into the contiguous United States may incur customs fees - depending on the destination country.

That fee may vary depending on the Union’s order value, country limits and other factors based on the product itself.

Customers are responsible for these fees and any other necessary fees are paid to the appropriate customs agency by the customer, he said.

But in an effort to make up the difference, UnionMadeStickers is currently offering a 25% discount on first orders.  Just use the promo code: WNY25OFF.  A link to the order form appears in the company’s advertising on WNYLaborToday.com’s Front Page.

“We’re ‘seeing a lot of new’ business - ‘we’ve seen a (28%) increase since the first of the year (2021).’  Unions are ‘coming back to our website and ordering and purchasing their stickers from there,’” Miller said.

Now, Miller is waiting to see how much longer the U.S.-Canada Border will be closed so he can pick back up on plans to open an operation in the United States - in Buffalo that is.

“Why Buffalo?  ‘Because it’s close,’” he said. “Before COVID, ‘we were doing our due diligence - what it would look like if we did.’  ‘Now, we’re waiting to revisit it.’”

In addition to his Union sticker manufacturing operation, Miller also owns and operates National Industries Embroidery (www.nieplus.com), which offers Unions and their Members an array of Union-made clothing, as well as working with Union Locals to set up a virtual store on their own websites so their Members can make their personal selections - and by offering an ordering process that is both simple and fast.

But that, my friends, is a WNYLaborToday.com story for another time - stay tuned for more in the not too distant future.