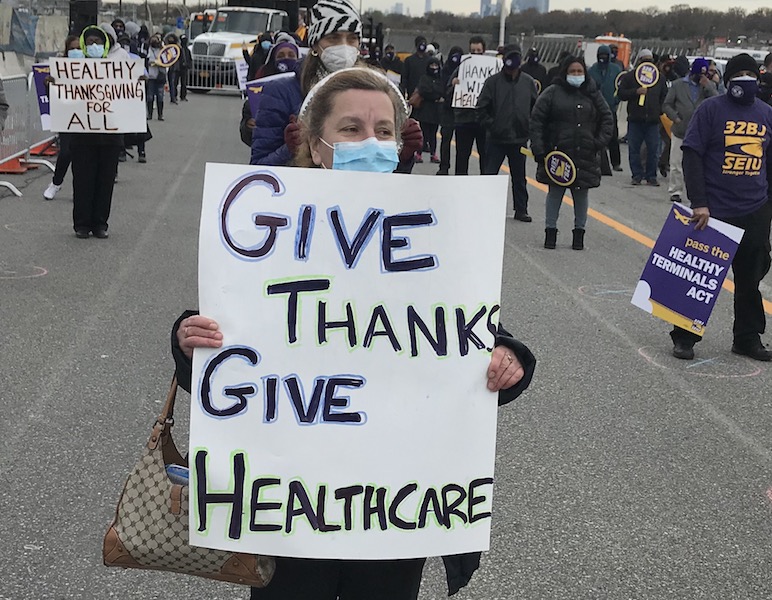 New York-Presbyterian hospital charges 370% of the Medicare reimbursement rate, despite receiving a $687 million taxpayer-funded bailout from the CARES Act - and an untold amount from the American Recovery Act.

Reigning in their inflated costs could save the city billions of dollars that could be spent on public services, wages for Workers and budget shortfalls.

The States of California, North Carolina and others are already pushing back against similar predatory hospital pricing.

“The costs come out of Workers’ pockets,” Bragg said. “We must look at ways to make it easier to work here and stay here in New York.”

The on-going COVID-19 Pandemic has already claimed the lives of some 200 Union Members.

32BJ Member Ronnie Correa, a Building Doorman and Porter, said he was told he wasn’t covered for some of the side effects he was experiencing after being stricken with COVID-19.

Many of his Co-Workers feel the same.

“What hospitals are doing is not right,” Correa said. “We are around tenants, contractors.  We are at the front lines.”

32BJ Member Elijah MacKay suffered through COVID-19, along with his entire family.

The veteran Security Officer at 140 Broadway said the cost of private health insurance is already sky high and keeps increasing: “Our employers say they don’t have the money to give us raises and pay health care costs.   I need both.  We are essential.  We put our life on the line and our families’.”

To Directly Access This Labor News Story, Go To: www.laborpress.org/call-for-immediate-action-as-4-million-new-yorkers-face-loss-of-healthcare/