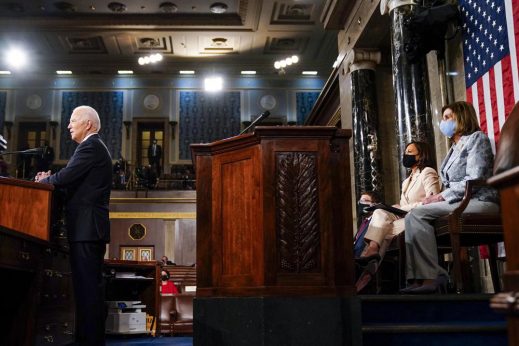 (WASHINGTON, D.C.) - Democratic President Joe Biden unveiled a long, strong progressive agenda in his Wednesday (April 28th) equivalent of the State of the Union address, urging lawmakers to pass the Protect the Right to Organize (PRO) Act, raise the Federal Minimum Wage to $15 an hour, pass strong Equal Pay Legislation, and declare - and fund - child care as one part of his American Families Bill, among other causes.

Biden spoke to an unusual and historic joint session of Congress, with only 200 masked people scattered around the U.S. House Chamber and galleries, not the usual joint session crowd of 1,400-plus.  It was Coronavirus physical distancing restrictions that forced the small crowd.

The President began his address, on day 99 of his Presidency, by celebrating progress against the viral plague and a following triumph for Democracy, while ending it with a warning about an existential threat, from “domestic terrorism” and white nationalism, to the country’s system of government.

Biden began by applauding, literally, that for the first time in history, two women -Vice President Kamala Harris and House Speaker Nancy Pelosi, both Democrats from California, sat behind him on the podium.

Harris and Pelosi are first and second in the line of Presidential succession.

Then, and throughout his speech, attending Republicans sat on their hands.

Biden urged vigilance against the White Nationalist and extremist threat, citing those who invaded the Capitol and almost took over the House Chamber itself on January 6th.

“The insurrection was an existential test of our Democracy and it survived,” Biden said.

But the new test is, he said: “Can democracy deliver on our promise?” to the U.S. people, including the disaffected and distrustful.

“Can we overcome the hates, the angers, and the fears?” that drove that invasion, which killed five people, trashed parts of the building’s interior, and featured prominent display of the Confederate flag, Biden asked.  “The autocrats are betting that we can’t.”

The U.S. can overcome that hate, Biden explained, by creating a society and economy that benefits not just the rich but the rest of us.

Which is why he pushed the PRO Act and other Pro-Worker measures, including his $2 trillion Infrastructure Plan and his American Families Act.

“Wall Street didn’t build this country.  The Middle Class built this country and Unions built the Middle Class,” Biden declared, re-running a line he’s often used. “And that’s why I’m calling on Congress to pass the Protecting the Right to Organize (PRO) Act.  Send it to my desk and I’ll sign it.”

“And while we’re doing this, send the increase in the Minimum Wage to my desk and I’ll sign it. And send the Paycheck Fairness Act,” which would put strong enforcement teeth into the Kennedy-era Equal Pay Act, “and I’ll sign it,” Biden said.

The kind of new society and economy outlined in his speech would also attack structural racism, lead the world in fighting climate change, produce Green and Union jobs via the infrastructure plan, and prepare itself to battle the next pandemic, Biden added.

Biden proposed paying for his ambitious plans by, among other proposals, forcing the rich and corporations “to pay their fair share” through higher taxes - including repealing favored treatment for capital gains - and tough enforcement against tax evaders, big corporations and the ultra-rich.

To Continue Reading This Labor News Story, Go To: www.peoplesworld.org/article/biden-agenda-pushes-jobs-families-equality-wage-hikes-and-unions/