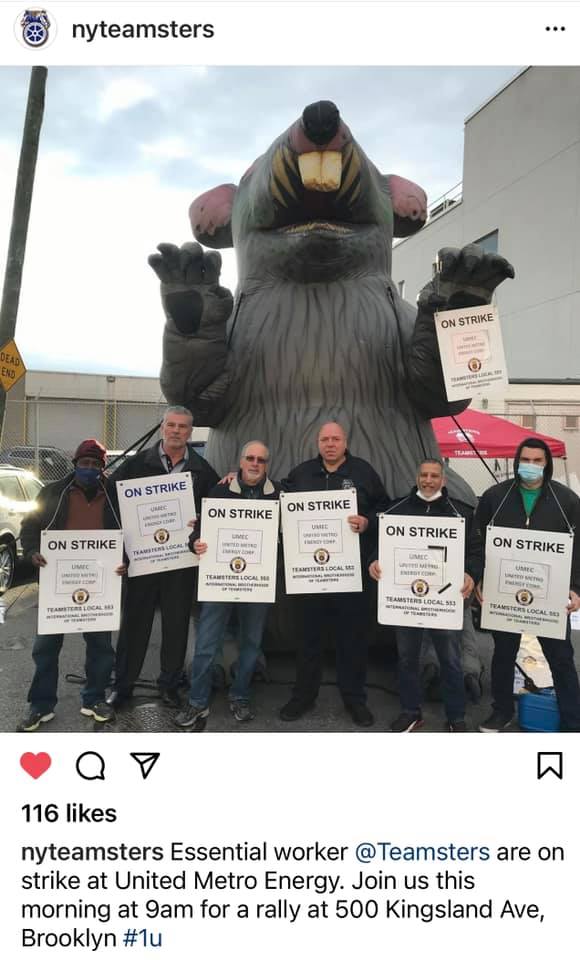 “They fire people at will.  I’m easier to get rid of than the copper,” André Soleyn, a Terminal Operator and father of three who was sacked the day the Strike began, told LaborPress at a rally held outside the United Metro Terminal in Greenpoint on Tuesday (April 27th).

Two more workers were fired on the 20th and the 26th, according to the Teamsters, and the company did not give a reason.

Once, when a manager was fired, Soleyn says the company hustled him out so fast he had to leave his glasses behind.

With a Union Contract, he added, they’d be protected by a grievance procedure.

“There must be some kind of oversight to this firing,” he said. “It makes for low morale.”

The Strikers work as Terminal Operators, Truck Mechanics and Service Technicians, who voted to join Teamsters Local 553 in February 2019.

But the Catsimatidis’ lawyers negotiating for United Metro, says Local 553 Secretary-Treasurer Demos P. Demopoulos, are “reluctant to come into the pension” or commit to having Workers be covered by the Teamsters’ Health Benefits Plan.

“They’re trying to cut out the pension,” former Teamsters Joint Council 16 President George Miranda said. “That’s what it comes down to all the time.  It’s a profitable company.”

Workers now have only a 401(k) plan and the company matches half of what they contribute to it, up to 3% of their annual salary, according to a Local 553 Official.

The company bills itself as “the leading energy provider in the New York Metropolitan Area and Long Island.”

It also has a terminal on Long Island Sound, 80 miles east of New York City and is building a Bio-Diesel Plant in Brooklyn.

About 75 people, a mix of Strikers and Members of other Teamsters Locals turned out to join the picket line outside the Greenpoint Terminal, across the street from the giant metal onions of the city’s sprawling sewage-treatment plant, in the industrial area on the banks of Newtown Creek.

Dump trucks and fuel-tanker trucks passed by on Kingsland Avenue, their drivers honking loudly in support.

To Continue Reading This Labor News Story, Go To: www.laborpress.org/teamsters-strike-to-win-contract-at-citys-biggest-fuel-company-three-are-fired/