Teamsters Rally in Queens After UPS Cans 10 - Including Pregnant Women 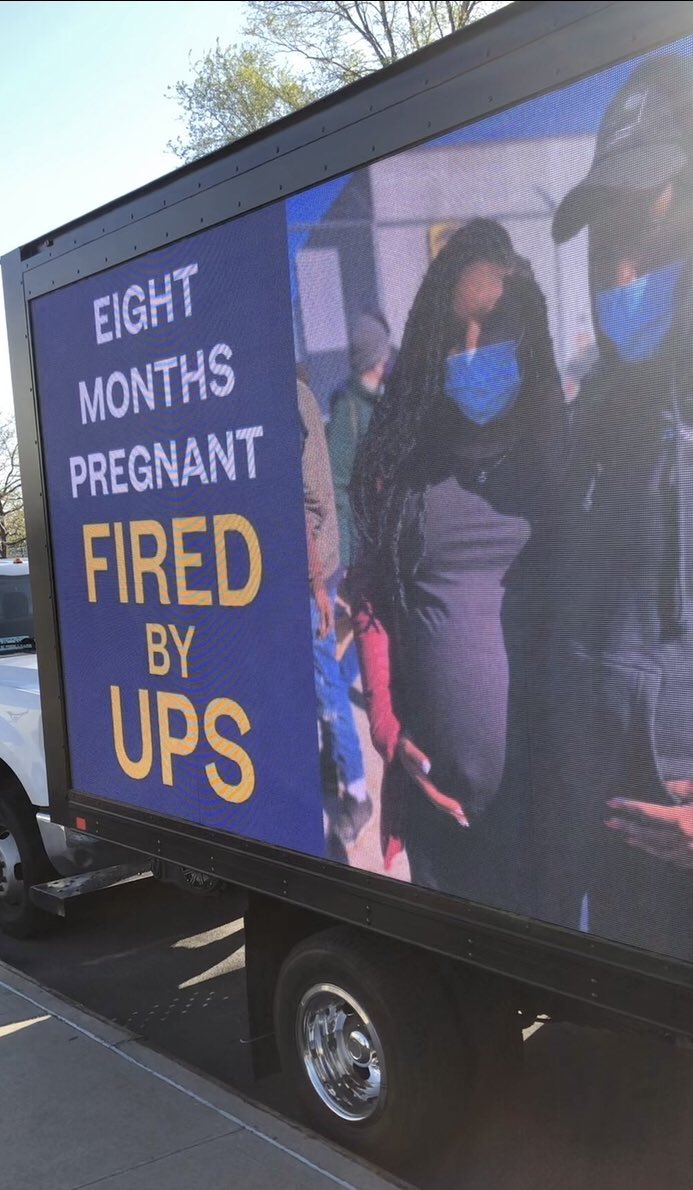 In addition, other UPS Workers were told that they were suspended.

One of them, a pregnant woman who’s worked the last two years for UPS and preferred to remain anonymous, told LaborPress that she and her sister, also pregnant, found out about their suspensions on April 14th when they tried to check their digital timecards.

“(My sister and I) were supposedly not let go, but suspended,” the pregnant Worker said. “We do not know what is going on.  It’s upsetting.  We looked on our time cards and it just said, ‘suspended.'”

According to Teamsters Local 804 President Vincent Perrone, Part-Time Workers are only obligated to work five hours.  Those let go chose not to work overtime because of mitigating circumstances, he said.

“Two of them are pregnant,” Perrone said. “One of them is a father.  He has a special needs child.  Others had other jobs to go to because they can’t live on the ($15)-an-hour that UPS pays them.  They get up at one or two in the morning to load packages.  They are ‘Essential’ Workers and UPS is treating them as ‘expendable’ Workers.”

The suspended Worker who spoke to LaborPress is seven-and-a-half months pregnant and worked as a Pre-Loader at Small Sort, the UPS Division where Workers organize small packages.

“We are assuming it’s because of leaving after our fifth-hour,” she continued. “It ‘makes no sense.’  We have been doing the same thing for months.  ‘So, this makes no sense.’”

Queens resident Jamiya Sinclair, 27, is also pregnant and works at Small Sort.  Previously, she worked loading trucks, but was assigned a less taxing position at Small Sort after proving her pregnancy.

Sinclair believes she not lost her other job - and only worked her regular hours without overtime at UPS - she, too, would have been fired.

According to Sinclair, after getting the new position, UPS started asking Workers to take on additional hours because it is short staffed.

“Next week I’ll be five-months,” said Sinclair. “I used to love it here.  ‘They’re making it difficult because of the short staff, but I’m getting more and more tired since I’m pregnant.’  ‘It’s not the same.’  They have let go a few people’ and then they threatened a few of us with being fired if we leave after our five-hours, which is in our right.’”

The Workers get overtime pay automatically, but do not receive pay for time-and-a-half or for coming early to work when asked, according to Sinclair.

“That ‘could have been me,’” Sinclair added, referring to her pregnant colleagues. “I ‘have to stay a little longer, not the full-time, but up until my limit.’  ‘We are being overworked since the (Coronavirus) Pandemic.’”

To Continue Reading This Labor News Report, Go To: www.laborpress.org/teamsters-rally-in-queens-after-ups-cans-10-including-pregnant-women/