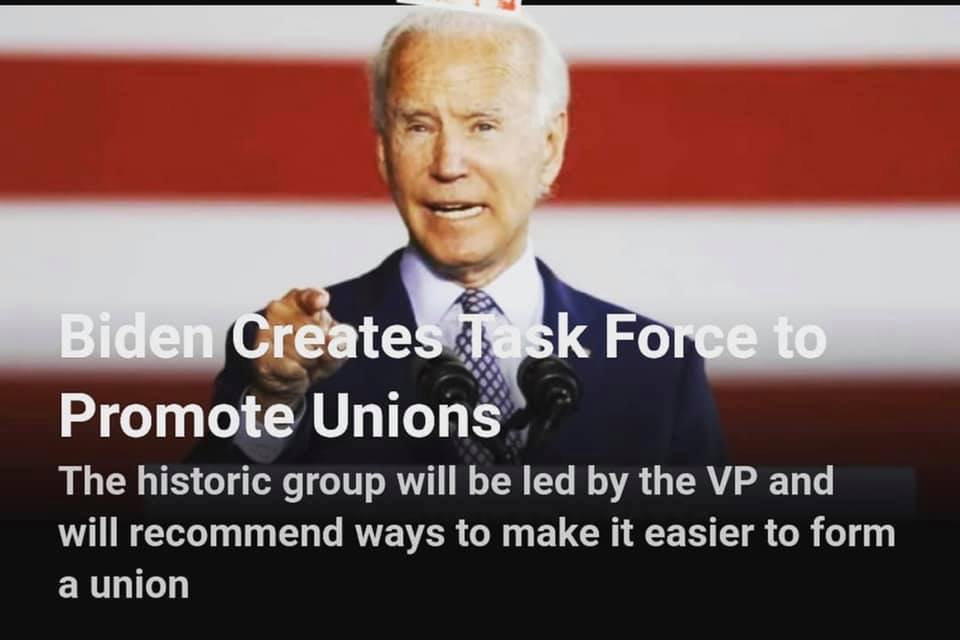 The task force, to be led by Vice President Kamala Harris and populated by Cabinet Officials and top White House advisers, will issue recommendations on how the Federal Government can use existing authority to help Workers join Labor Unions and bargain collectively.

It will also recommend new policies aimed at achieving these goals.

The White House document notes that the National Labor Relations Act (NLRA), the 1935 Law governing Federal Labor Rights, explicitly sought to encourage collective bargaining, but that the Law has never been fully carried out in this regard.

“No previous administration has taken a comprehensive approach to determining how the executive branch can advance Worker organizing and collective bargaining,” the document states.

The task force will focus, among other things, on helping the Federal Government encourage its own Workers to join Unions and bargain collectively, and on finding ways to make it easier for Workers, especially women and People of Color, to organize and bargain in parts of the country and in industries that are hostile to Unions.

Even before the announcement of the task force, many labor Leaders regarded Biden as the most Pro-Union President in generations.

They cited his quick ouster of Trump appointees they regarded as Anti-Labor, the tens of billions of dollars for shoring up Union Pension Plans enacted in his Pandemic Relief Bill and a video message during a recent Union Campaign at an Amazon warehouse in Alabama warning employers not to coerce or threaten Workers who were deciding whether to Unionize.

The task force comes at a particularly frustrating moment for Organized Labor.

Roughly two-thirds of Americans approve of Unions, according to a 2020 Gallup Poll, but just over 6% of Private Sector Workers belong to them.

Union Leaders say the Law, which allows employers to saturate Workers with Anti-Union messages and does little to punish employers who threaten or fire Workers seeking to join a Union, makes it very difficult to Unionize.

Biden’s task force will solicit the views of Union Leaders, academics and Labor Advocates and is to deliver its recommendations within 180 days.

To Directly Access This Labor News Report, Go To: www.nytimes.com/2021/04/26/business/economy/president-biden-will-promote-unions-through-a-white-house-task-force.html?fbclid=IwAR0VVjGdyAL-Pev8iPR3i-qQtYSyUJAecwyj5xAdywXUL-ZFf3x2CdSzssc