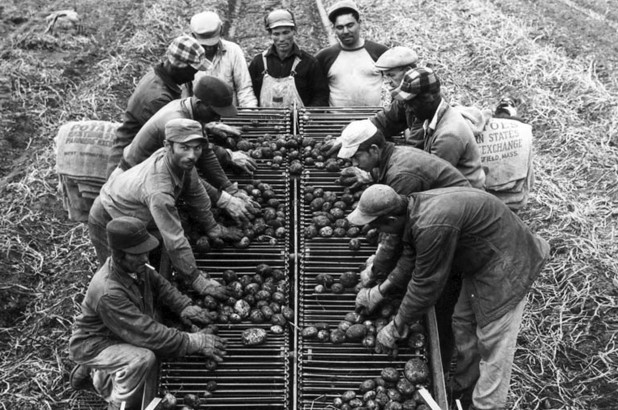 (LONG ISLAND, NEW YORK) - Starting in World War II, when labor shortages meant Long Island farmers lacked Workers to tend their fields, they began importing Migrant Laborers from Mexico, Jamaica and the American South to do the job.  Or, as one Suffolk County grower put it: “People used to own slaves.  Now we just rent them.”

The horror stories of the Migrants who toiled in Suffolk County’s fields in the second half of the 20th Century are detailed in Long Island Migrant Labor Camps: Dust for Blood (History Press) by Mark Torres, out now.

At its peak, up to 7,000 Migrants a year worked on Long Island farms, including 4,500 in Suffolk County in 1960 doing the exhausting job of “stoop labor” - scooping up potatoes or picking cauliflower, beans, strawberries and other fruits - for as little as a dollar an hour.

While locals initially opposed building camps for the Workers to live in, scores of these residences eventually came to pepper the Suffolk County landscape.

Normally situated on the outskirts of town and surrounded by barbed wire fences and No Trespassing signs, these migrant camps were often littered with garbage, plagued by raw sewage and rife with inoperable (or non-existent) plumbing and heating systems.

Fires frequently blazed through these camps.

Four Migrants died in an inferno at the Cutchogue camp in 1961, while another claimed three at Bridgehampton in 1968.

Those three may have died because the door to their lodging had been nailed shut to keep out a cold draft, Torres writes.

Many of the Migrant Workers were teenagers, such as Alfonzo Mahone, who was living in Macon, Georgia in 1968 when a white van pulled up and a woman leaned out and offered him work picking apples in Virginia.

Out of financial necessity, Alfonzo’s mother agreed to let her son go.

After sleeping in the van for a week and eating mostly bologna or peanut butter sandwiches, Alfonzo was dropped off with a “harsh” crew leader in Virginia, who promised $70 a week for picking tomatoes, Torres writes.

So the teen hitched a ride with Charles Wright, a recruiter who promised better opportunities in the fields of Suffolk County.

Alfonzo eventually found work at a potato processing shed for the Southampton Produce Company in Bridgehampton.

Under a sign reading “a bruised potato never heals,” he sorted and bagged the spuds.

It was “grimy” and “grueling” work that, after just three days, led to him hurting his hand.

“You get your small ass out of here and get back to the camp,” the foreman barked when the teenager told him he was injured.