âIf We Have To Strike, Then So Be It.â - âDespiteâ Healthy Terminals Act, Contractors âDeny Health Careâ To Thousands Of Airport Workers 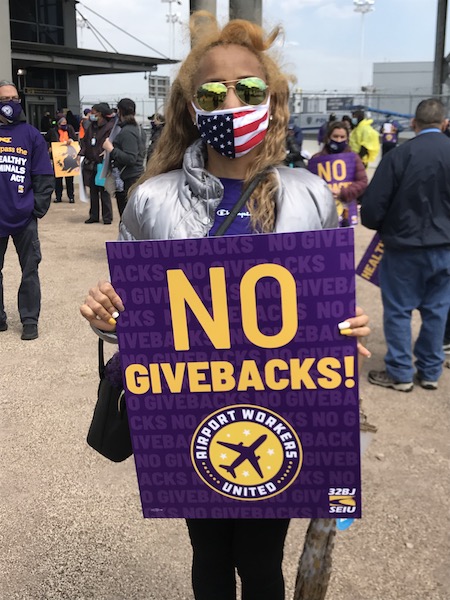 The Healthy Terminals Act, signed by New York Governor Andrew Cuomo last December 31st and currently awaiting New Jersey Governor Phil Murphy‘s signature after it was passed by both houses of the state legislature last month, requires employers at airports to contribute $4.54 for health insurance for each hour an Employee works.

It is mainly aimed at the airline subcontractors who hire Cleaners, Security Guards, Baggage Handlers, Customer-Service Representatives, Catering Workers and others at JFK, LaGuardia and Newark airports.

But the group of 23 contractors negotiating a contract covering more than 10,000 Workers at the three airports has been reluctant to put the mandate into practice, 32BJ SEIU Officials says.

“Our biggest demand is health care,, but we have made very little progress with the employers,” JFK Cabin Cleaner Venice Russell, a member of the Union’s Bargaining Committee, told LaborPress before the rally.

The contract talks began in early March and the old agreement expired on April 1st.

“We won meaningful health care that all Essential Workers should have and now the employers are trying to strip that away from us,” Vladimir Clairjeune, a JFK Passenger Service Representative, told the rally. “If we have to Strike, then so be it.”

“We cleaned every doorknob, we disinfected every corner of the airport,” LaGuardia Terminal Cleaner Cristina Mendez said, speaking in Spanish. “If they don’t give us health care after risking our lives during the pandemic, when will they?”

The Union-Avoidance Law Firm Seyfarth Shaw has questioned whether New York would be able to impose prevailing-benefits requirements unless New Jersey enacted a similar law.

“With all that’s going on today,” Russell told LaborPress, the contractors’ bid to cancel the King Day paid holiday is particularly disappointing.

“We fought long and hard for Martin Luther King Day,” she averred. “We are not going to give it back. We’re 32BJ.”

To Read This Labor News Story In Its Entirety, Go To: www.laborpress.org/despite-healthy-terminals-act-contractors-deny-health-care-to-airport-workers/