3,000 UAW-Represented Workers In Dublin, Virginia Are On Strike At The Largest Volvo Truck Manufacturing Plant In The World 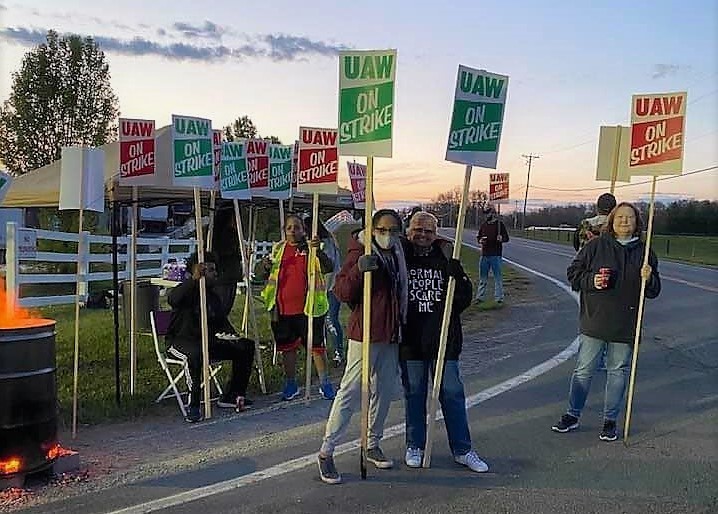 (DUBLIN, VIRGINIA) – Union-represented Workers at the Mack and Volvo Truck of North America Manufacturing Plant in Dublin, Virginia - which makes regional and long distance hauling vehicles for the entire country - have been on Strike for more than a week now and show no signs of backing down.

Workers at Volvo’s New River Valley Plant in Dublin, Virginia - the largest truck manufacturing facility in the United States - downed their tools and walked off the job.

Since then, almost 3,000 Members of United Auto Workers (UAW) Local 2069 have taken up picket lines around the plant, demanding higher wages, extended health benefits for Retirees, safer working conditions, and an end to the multi-tier wage system that allows new hires to make as little as half the wages of more senior Workers.

The walkout, which began on April 17th, follows a successful Strike Vote passed in February - just before the expiration of the last contract.

While even long-time Workers at the manufacturing plant are being paid as little as $16-an-hour, Mack and Volvo Truck of North America (VTNA), which is owned by Volvo Group, continues to make massive earnings.

Last year, thanks to the Coronavirus Pandemic, VTNA saw reductions in new truck orders, but still posted more than $3 billion in profits.

This year, however, orders have increased dramatically and Class 8 Truck orders are up more than 242% over 2020.

This high demand will mean even greater profits for VTNA in 2021.

Workers on the picket lines say they expect to see a share of this new wealth and that they are determined to stay out as long as it takes to win higher wages and safer working conditions during the pandemic.

“No matter how long we need to stay we will get it or they can hire (3,000) more people, because in the last few years they had trouble finding (1,000),” said one Worker.

While Workers are currently being issued Strike Pay from the UAW National Strike Fund, they are unsure whether Volvo will continue to honor their health insurance, since their contract expired in February.

Cutting health insurance for striking Workers has been used by bosses to break or weaken their resolve, and was a tactic used as recently as the UAW Chrysler strike in 2019.

This practice would remain legal even if the PRO Act were to pass the Senate.

Among the many demands put forward by the Union, the issue of the multi-tier wage system is one that Workers say they are especially concerned about.

Such multi-tier wage systems have been a powerful weapon against Workers that have allowed the auto industry to chip away at decades of hard won wage gains.

This wage system has more recently allowed multi-national companies like Volvo to ramp up production by hiring more low-paid Workers, while squeezing out higher earners and making billions in additional profits.

To Read This Labor News Story In Its Entirety, Go To: www.leftvoice.org/3000-workers-are-on-strike-at-the-largest-volvo-truck-manufacturing-plant-in-the-world?fbclid=IwAR0EdvRZ2SxoB5fxYh5OxtYBauGzlWW0CFqjKRdbEU0Or30j_3ODvLLGbyY