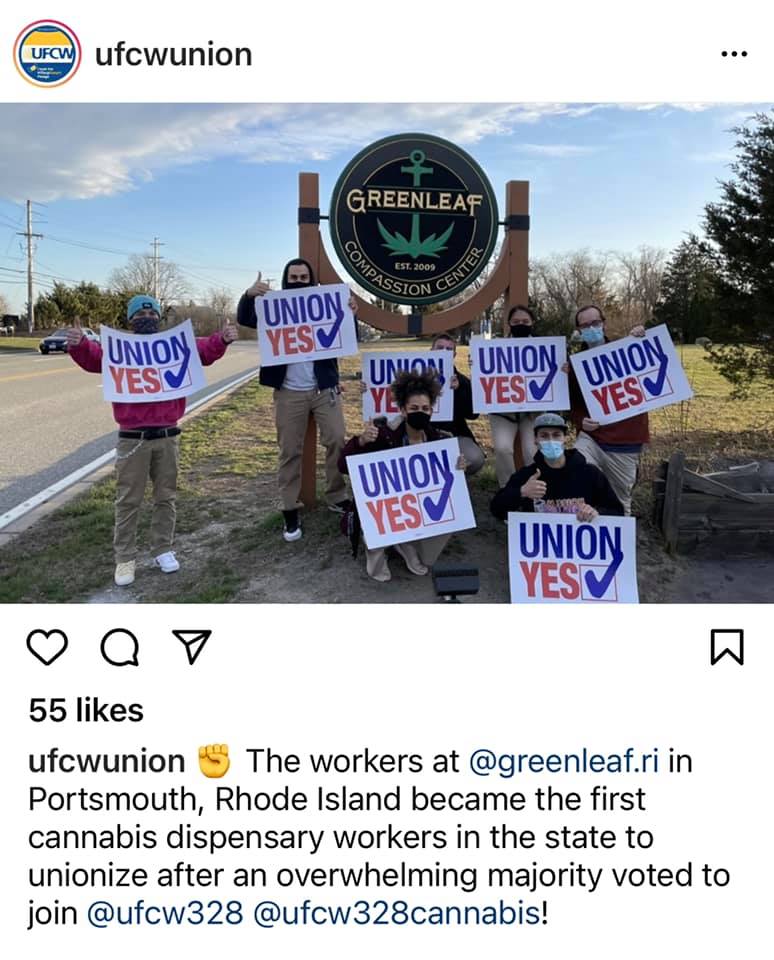 (PORTSMOUTH, RHODE ISLAND) - In a milestone moment, the Employees at Greenleaf Compassionate Care Center in Portsmouth became the first Cannabis Dispensary Workers in the State of Rhode Island to Unionize after an overwhelming majority voted to join United Food and Commercial Workers Union (UFCW) Local 328 by a vote of 21-to-1.

Each day, these Workers strive to serve the needs of their patients by providing medicine and guidance through the state’s legal Medical Cannabis Program.

In the weeks leading up to the election, Greenleaf management hired out-of-state Anti-Union consultants who held mandatory meetings and distributed flyers to Employees in the dispensary.

Despite their attempts, the Workers at Greenleaf remained united and displayed incredible support and solidarity, UFCW Officials said.

The tactics by the company only reaffirmed the Workers’ strong commitment for forming their Union and securing a better and brighter future for all at Greenleaf, Union Officials said.

Contributing factors that led to the Workers to organize included the company’s sudden elimination of the Employee Incentive Program, as well as a significant reduction of Employee benefits.

Workers also cited their lack of power in decision-making and felt they often went unheard when concerns are brought to ownership.

The Staff at Greenleaf also came together in hopes of securing an equitable future in an industry that is seeing rapid changes and growth.

The Workers released a joint statement after the victory: “We hope that through demonstrating our continued commitment to one another in organizing as Workers that we can create some form of lasting change within Greenleaf that allows for better job security and more space for us to actually be heard.  We are proud to become a part of the larger momentum being seen by Workers to Unionize that is taking place within the Cannabis Industry.”

After filing for their election in February, Greenleaf Workers received strong support from their patients at the dispensary.

They also received support from Reclaim RI, an organization in Rhode Island dedicated to ensuring that the expansion of legalized cannabis includes racial, social and economic justice for Workers and communities.

Workers at Greenleaf will now have a collective seat at the table as they negotiate their first agreement, UFCW Officials said.

By continuing to build a coalition of support, they will have a strong foundation among patients, community groups and Labor allies.

“We are so proud of the incredible team at Greenleaf for sticking together.  Each day, they provide value to their patients and our communities.  We look forward to partnering with them towards building the better future they all have earned,” UFCW Local 328’s Director of Organizing 328 Sam Marvin said.

To Read This Organizing Labor News Story In Its Entirety, Go To: https://upriseri.com/greenleaf-compassionate-care-center-unionizes/