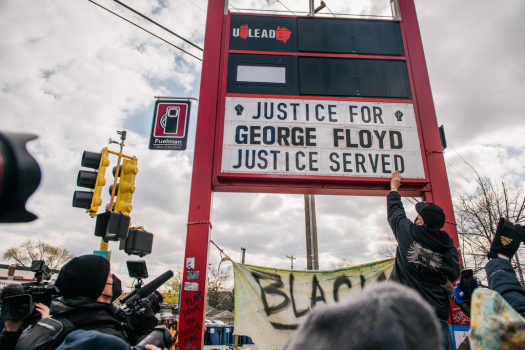 (NEW YORK CITY) - Many watched as Derek Chauvin was escorted out of a Minnesota courtroom on Tuesday (April 20th), after a jury found him guilty of two counts of murder and one count of manslaughter in the killing of 46-year-old George Floyd last May.

The convictions could send the now former Minneapolis Police Officer to prison for up to 40 years.  Minnesota sentencing guidelines, however, are advisory and not mandatory.  Many suspect Chauvin could end up serving less than 13 years.

The jury - comprised of six Whites and six People of Color - delivered their verdict a day after closing arguments.

Chauvin was then remanded to the Hennepin County Sheriff after his bail was revoked.

“We hope this ruling brings a sorely needed measure of relief and peace to the family of George Floyd and that it signals a step in the right direction towards repairing our broken Policing and Judicial Systems,” 32BJ Service Employees International Union (SEIU) President Kyle Bragg said in response. “While today’s decision is a step in the right direction, we are far from where our Nation needs to be in order to live up to our own ideals.  We must ensure this ruling signals an end to the cycle of violence against our Black and Brown Communities and the beginning of long overdue reform of our broken Policing and Criminal Justice Systems.”

We must not forget other victims of police violence, including Ahmaud Arbery, Breonna Taylor and Michael Brown, Bragg added.

“The fact still remains that police shootings are a leading cause of death among Black men, yet few Officers are ever charged and even fewer are convicted,” said Bragg. “As a Union representing mostly Black and Brown Workers, our Members cannot escape a dangerous reality that they too could become a victim of police brutality, even as they risk their own lives keeping us safe on the frontlines as Essential Workers who clean and secure buildings.  Many must travel to and from work during off-hours and fear being harassed and brutalized by the police.”

United Probation Officers Association President Dalvanie Powell felt justice was served, despite the sad moments that led to it: “We recognize that in the path to achieve racial justice for all, still far too many of our brothers and sisters still will lose their lives if we do not hold those accountable for their actions.  We are committed to bring about change that allows everyone, and in particular our Black and Brown communities, to feel that they live in a society where they are equal, where they are respected, and where their lives matter.”

The Communications Workers of America (CWA) also applauded the verdict, but said it is “not enough: “Today’s verdict finding Derek Chauvin guilty of the murder of George Floyd is a step toward justice for Floyd, his family members and all those who have been affected by his brutal murder.  We’ve heard all the pretexts and excuses and promises to do better, but the fact remains that there has been no reduction in the racial disparity in fatal police shootings over the past five years.”

The 700,000- Member Union says hard, transformational work is needed to root out racism in America’s consciousness and institutions that uphold it: “Our Union is committed to educating, organizing and mobilizing for racial justice.  That work begins with fighting racism within CWA and extends into our workplaces and our communities.”

To Continue Reading This Labor News Story, Go To: www.laborpress.org/labor-leaders-hail-chauvin-guilty-verdict-call-for-transformational-change/