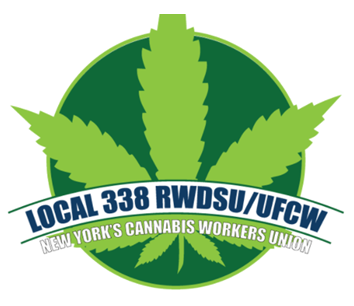 “I’ve worked for Sunnyside for about a year and a half and joining Local 338 is an exciting opportunity for me and my Co-Workers because it means having access to quality health coverage at no cost to us.  However, being a Union Member means more to me than just the benefits our contract provides.  I see it as giving me the opportunity to grow personally and professionally, granting me a long-term career path in the cannabis industry,” said Tyler Curtis, a Local 338 RWDSU/UFCW member and Wellness Advisor working at Sunnyside.

“Our Members are dedicated to the patients they serve and provide a significant service to the company they work for.  With strong starting salaries for new hires, wage increases for current Workers and no-cost health benefits for Workers and their families, this first contract sets a standard for not just careers at Sunnyside, but also what Workers in New York’s cannabis industry deserve and should expect as the industry continues to develop,” Local 338 RWDSU/UFCW Secretary-Treasurer Joseph Fontano said.

The Sunnyside (Cresco Labs) contract was ratified after months of negotiations.

The contract is in effect for three years and includes critical provisions such as: Annual wage increases or bonuses over the term of the contract.  The hourly rate of pay for Members will increase an average of 4.15% per year (based on Workers’ job classification) over the term of the three-year agreement; The Union secured language in the contract that increases the minimum starting rate for all new hires; Workers will receive paid time off, as well as additional paid holidays, including Juneteenth; and the company will provide Workers and their dependents with full medical coverage through the Union’s medical fund at no cost to the Workers through the term of the contract.

Sunnyside joins five other medical cannabis companies with Collective Bargaining Agreements (CBAs) already in effect in New York State and Local 338 RWSDU/UFCW represents 500 Workers at these companies who are employed across the industry’s supply chain.

The RWDSU represents 100,000 Members throughout the United States.

The RWDSU is affiliated with the UFCW.