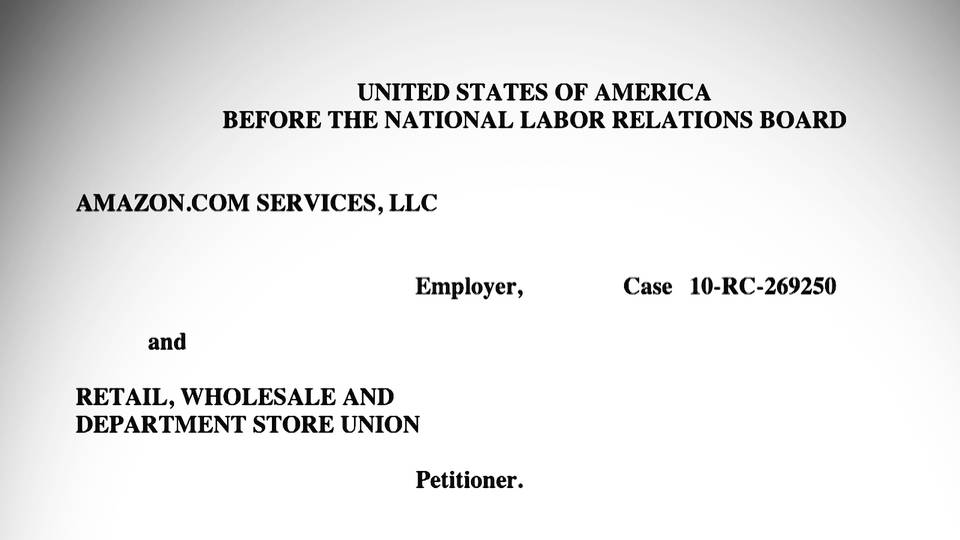 (BESSEMER, ALABAMA) - In the matchup between Amazon and the Retail, Wholesale and Department Store Union (RWDSU), round one went decisively to Amazon.

Workers at BHM1, the company’s fulfillment center in Bessemer, Alabama, voted 1,798 to 738 against Unionizing, with 505 challenged ballots left uncounted.

For months, the Union has accused Amazon of fighting dirty, and now it’s making those accusations official.

This week the RWDSU filed objections with the National Labor Relations Board (NLRB), claiming Amazon violated the terms of the election and asking the Board to void the result.

The RWDSU outlined a whopping 23 objections to Amazon’s conduct, arguing that the company “prevented a free and uncoerced exercise of choice by the Employees.”

Eight of the objections concern the collection box Amazon installed in the warehouse parking lot to collect ballots for the election.

A sign instructing Employees to “Speak for yourself! Mail your ballot here,” hung from a tent encircling the box.

It vanished after the election.

In its objections, the RWDSU argues that the collection box violated the procedural rules the NLRB spelled out in January.

The Board never authorized the box and had denied Amazon’s request for one inside the warehouse.

The collection box, the Union says, created the impression Amazon, not the NLRB, had control over the election and constituted improper voter surveillance, since security cameras watched the tent.

The Union claims the company repeatedly instructed Employees to vote on-site, calling this “a form of ballot solicitation,” in defiance of NLRB rules.

The RWDSU also claims the campaign slogan on the tent violated bans on electioneering.

The RWDSU’s 15 other claims outline a campaign to allegedly coerce, frighten and intimidate Workers into voting against the Union.

The RWDSU accuses Amazon’s “agents” of unlawfully threatening Employees with the loss of their benefits and pay if the Union won and warning that the facility might close altogether.

The Union claims Amazon stifled the right to free discussion by booting Workers out of Employee meetings for questioning Anti-Union talking points, selectively enforced social distancing rules against believed Union Supporters, and interfered with Employees’ ability to talk to the Union by pressuring local officials to change policies governing how Workers exited the warehouse and change the timing of a nearby traffic light.

The Union accuses Amazon of creating “an atmosphere of coercion and intimidation” by hiring uniformed off-duty Police Officers to patrol the parking lot, watching Employees and organizers.

One claim cites an e-mail Amazon supposedly sent to Workers, saying they’d have to lay off 75% of the proposed unit because of the Union.

To Continue Reading This Labor News Story, Go To: www.wired.com/story/union-says-amazon-violated-labor-law-alabama-election/