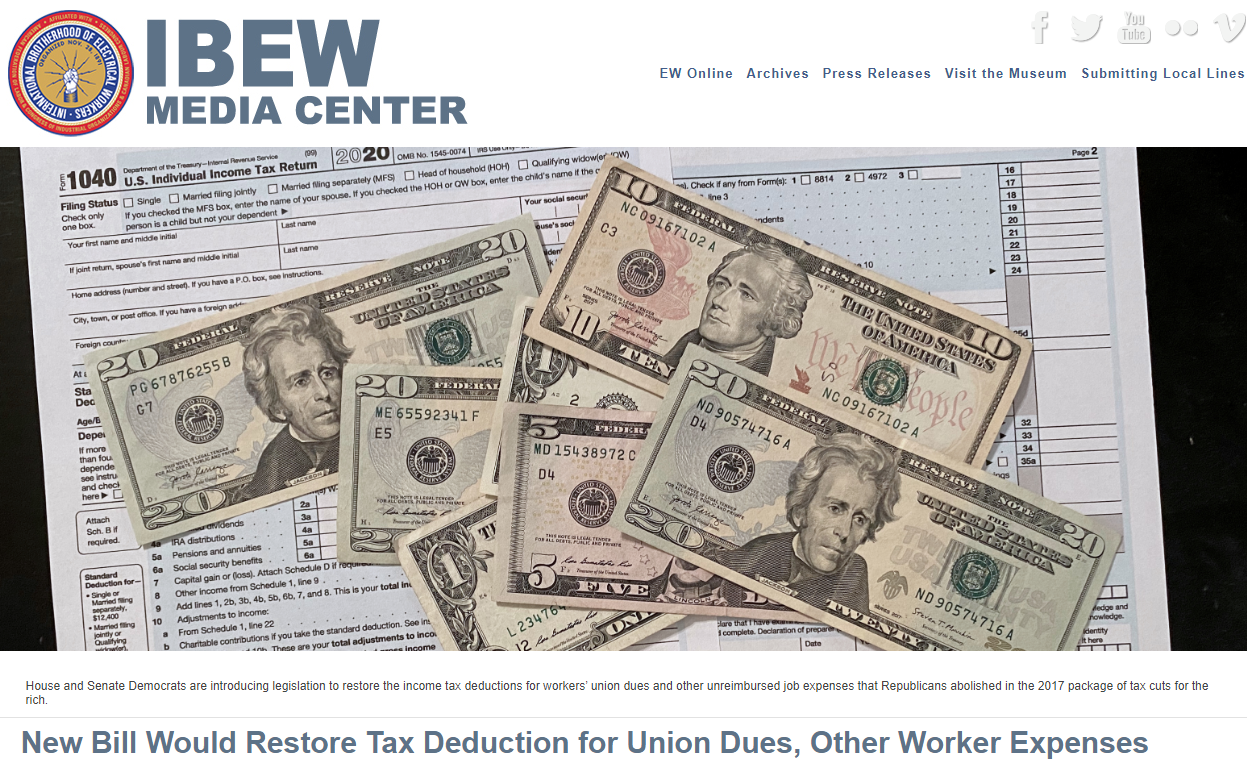 (WASHINGTON, D.C.) - Four years after the income tax deduction for Union Dues was ripped out of the U.S. Tax Code, Pro-Worker Lawmakers are fighting to bring it back and - for the first time, make it available without itemizing.

The Tax Fairness for Workers Act would also restore the deduction for other unreimbursed Employee expenses - including travel and the cost of tools and uniforms that were killed in the 2017 package of tax breaks for the rich.

“In 2017, Republicans eliminated tax deductions for Workers and instead gave massive tax cuts for large, profitable corporations,” Casey said. “This legislation would put money back in the pockets of Working Families.”

Specifically, the Bill would: Make the deduction for Union Dues “above the line,” meaning Union Taxpayers can claim it without itemizing; and Lift the suspension of the deduction for unreimbursed Employee expenses, including money spent out of pocket on tools, uniforms and other necessary supplies, travel costs and job search expenses.

“As our economy recovers from the pandemic it is critical we ensure all Americans can provide for their families,” Pennsylvania Representative Conor Lamb said. “This commonsense bill ensures that our tax code treats workers and union members fairly.”

Lamb is introducing a companion Bill in the House and, together with Casey, has been at forefront of the battle to restore and expand Worker-friendly provisions of the tax code.

Making the case for the proposals in an article last Fall, the Center for American Progress said the Pro-Union reforms “would be an important step forward in increasing the number of Workers with access to Unions and collective bargaining and should be part of any effort to create a more progressive tax framework.”

Until then, the authors said the tax code is one more roadblock to justice for Working People.

“Legal barriers against Workers extend well beyond Labor policy,” they wrote. “For a country that prides itself on the tenacity of its workforce, the U.S. Legal Code is steeped in rules that hinder Workers’ ability to prosper. “One need look no further than the Internal Revenue Code, which contains several provisions that further tilt power away from Unions and toward corporations.  Tax law allows businesses to deduct the costs of fighting Unions, prevents Workers from deducting the costs of joining a Union, and facilitates companies that misclassify Employees as independent contractors, which denies Workers their right to Unionize.”

CAP went into greater detail about the dues deduction in an earlier article, arguing that it needs to return without delay.

“Unions and the Workers they represent should not have to wait for this eminently fair tax treatment,” Senior Tax Policy Director Alexandra Thornton wrote. “If an above-the-line deduction for Union Dues were enacted now on a permanent basis, Workers and Unions would not be caught up in the decision that Congress will face in 2026 - whether or not to allow the law to automatically revert (to pre-2017 tax law) for a range of individual income tax provisions.”

To Continue Reading This Labor News Story, Go To: www.ibew.org/media-center/Articles/21Daily/2104/210421_NewBill/fbclid/IwAR3xTJG3_f_f0KK4mb_io-Cx36opmBqyjmM1uxg9OpUOMcMo5S_4pVEaaS4