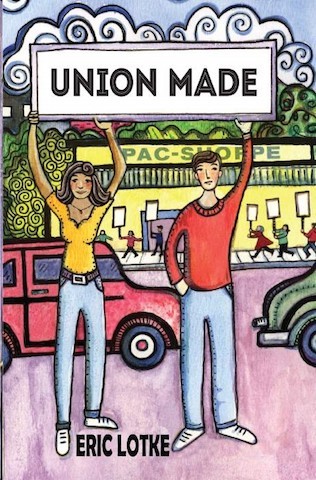 (NEW YORK CITY) - Tim Sheard’s Hard Ball Press publishes numerous novels involving Union activity, and Union Made, written by Eric Lotke, is one of the best of them, mainly because a believable and well-written romance highlights the story.

The book’s major subject is a fictional account of a Union’s attempt to secure a wage increase for the Employees of Pac-Shoppe, a Walmart-like store, plus more control over the scheduling of their work shifts.

But it’s also a charming and suspenseful story about a romance between Catherine Campbell, the attractive, intelligent, hard-working, and unmarried leader of Local 429 of the United Commercial Workers of Richmond, Virginia - and Nathaniel Hawley, an attractive, intelligent, and divorced Accountant at the accounting firm that handles the store’s books.

The book’s title, Union Made, a triple pun, indicates what is going to happen by its end: a “Union Maid” is going to move well along the road toward a successful romantic union with a possible Union enemy - while also strengthening the Union she heads, thus “making a union” in two different ways.

If Author Lotke were less skilled, the title would give it all away.

All these elements are skillfully mixed together into a steaming romantic brew.

Also adding to the appeal of the plot are numerous well-crafted minor characters, including the bright son of the cleaning lady at Nate’s office, the individual Workers Catherine launches against Pac-Shoppe while trying to protect them from the predictable Pac-Shoppe retaliation, and her growing realization Nate can be turned from a Union Foe into a Union Ally - as well as a romantic interest of her own.

All in all, Union Made is a must-read for fans of both Unions and romance.

To Directly Access This Labor Book Review, Go To: www.laborpress.org/collective-bargaining-and-romance-mix-in-the-pages-of-union-made/

And To Order Copies Of Union Made By Eric Lotke, Go To: Hard Ball Press.