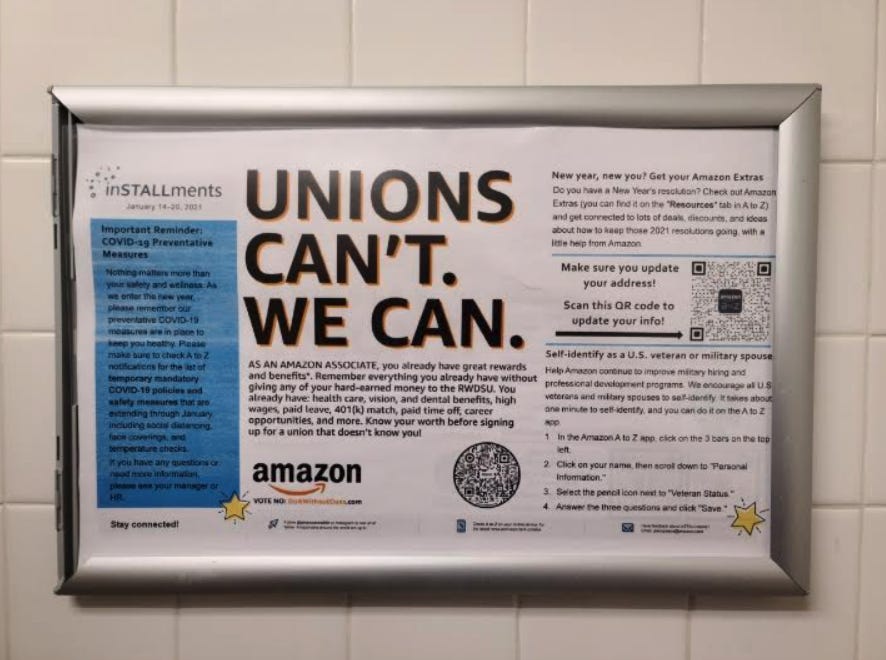 After a colossal effort, the Retail, Wholesale and Department Store Union (RWDSU) lost its organizing effort at Amazon in Bessemer, Alabama.

While very disappointing, we should not be completely surprised by the outcome.

We should also not be discouraged.

The Amazon campaign opened new territory for our Labor Movement.

Aspects of the economy have changed - but, the spontaneous movement of the Working Class towards self-organization has never gone away.

Amazon is a major corporation, perhaps the largest in the world.

It has succeeded in creating a new supply system that distorts and overturns the previous method of the distribution of goods.

Jeff Bezos has created a company that classifies the delivery of product as the work of individual entrepreneurs, not as part of a supply chain that employs people to do productive work.

Amazon purchases vast quantities of product that are utilized by all sectors of the economy, assembles them for shipping in mega warehouses and “subs” the delivery to an army of “Independent Contractors.”

It is worth reminding ourselves that this model cannot work without the productive labor of millions of Workers in every corner of the globe.

The Working Class - unlike the capitalist class, is international in nature.

The Workers in Africa or Latin America or Asia have more in common with the American Worker than Jeff Bezos ever could.

This then is where the question of consciousness becomes key.

A Worker is by definition someone who provides Labor Power to produce a thing of value.

Indeed, nothing in this world is produced without human labor.

Every stitch of clothing, piece of furniture, large machine or item of food is produced through the use of human Labor Power.

Even if a plant that produces automobiles is highly automated, it is human Labor Power that makes the automated machinery.

Further, all the work necessary to assemble and transport products is produced by people at work.

In our economy, these needs are purchased at a cost.

Money is used as the method of exchange.

Amazon has taken this objective truth and built an enormous business.

Without self-organization, the Workers at Amazon are left to the mercies of their employer to set the level of compensation and benefits to pay for their Labor Power.

They are simply cogs in this gigantic machine.

Whether the majority of Workers understand this issue or not, the reality is clear - they must join together as a collective to have any chance to improve their living standards.

The Amazon Unionization Campaign in Bessemer, Alabama did not convince the majority of the Workers to vote Union.

There are many factors for this failure, including the use of unfair practices by the company in the run up to the election.

In perhaps the most egregious example, the company argued to expand the eligible voters in the Bargaining Unit to include temporary Workers, greatly expanding its size.

Further, the temporary Workers were promised before voting a $1,000 bonus once they were no longer needed.

The establishment of the super-warehouse in Alabama, a Right-To-Work (for less) State, was also no mistake.

Furthermore, the fact that Workers at Bessemer are among the poorest in the geographic region and were 85% People of Color is not a misprint.

The threat of job loss because of support for the Union hits People of Color immediately in deep red Alabama.

Amazon is using these facts to construct a wall against Union Organizing.

It is a prime example for why we need the PRO Act, which will essentially outlaw the fear tactics used by employers to stop Union Organizing.

It must be passed and signed into law.

Brothers and Sisters, rest assured, there will be further attempts to organize the Working People in their struggle for economic survival.

We must pick ourselves up, dust ourselves off and return to the fight.

It is our duty to be a light that turns the spontaneous urge into a mighty organization by providing not just the structures of organization - but also the consciousness.

One must accompany the other or the path towards a better future will be postponed for generations to come.