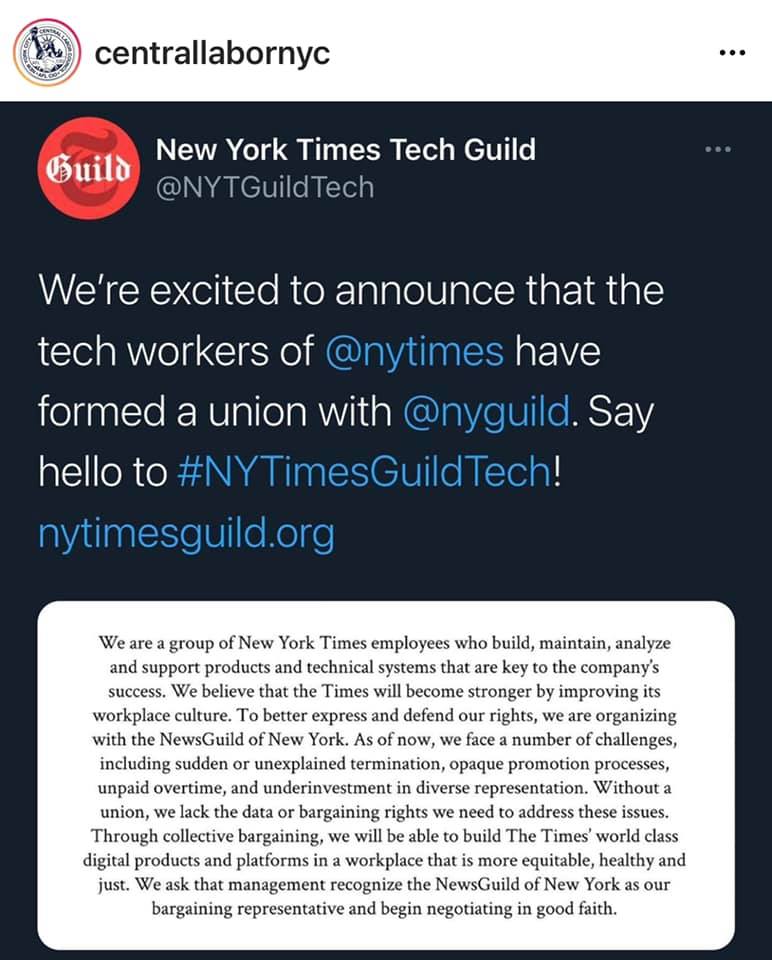 (NEW YORK CITY) - Thirty years ago, The New York Times did not have a website.  Now, the company employs more than 700 Tech Workers, almost half its number of journalists.  Today, those Tech Workers have announced they want to form a Union.

Almost half The Times is already Unionized, including most of the Journalists, along with more traditional newspaper technologists: the Printers.

Now, the Tech Workers want to join the Journalists in their Union, The NewsGuild.

The Times' Tech Workers include everyone from Software Engineers and Data Scientists to Designers and Project Managers.

These are the people who develop the Apps and website, make tools for Journalists, analyze data about traffic, and just like the Journalists, work around the clock when there is big news like an election.

This is the latest in a series of Unionizing efforts by both White Collar Tech Workers and Blue Collar Workers impacted by the Internet and Digital Technology.

If The Times Workers are successful in their Union bid, it will become the largest of any contemporary White Collar Tech Worker organizing effort to be recognized by the National Labor Relations Board (NLRB).

At KQED, we’ve been covering Tech Worker Union efforts, but this story hits closer to home.

My older brother is a Programmer at The Times - and is part of the organizing effort.

I would obviously be partial when it comes to any negotiations with management, so I’m not reporting on any of that.

Katie Robertson at The New York Times is covering how the Union came together and how this Union bid is being received.

What is happening at The Times though is a major development in a bigger story I have been reporting on for years.

The growing realization among Tech Workers that they don’t have as much say on the job as they’d wish and how organizing could be a way to change that.

The New York Times is a large media company, but like many remaining big newsrooms - it’s also a growing tech company.

Some of the Tech Workers do jobs specific to media, like making sure the story layouts transfer to print or helping Journalists create visualizations for data.

But there are teams of Developers and Engineers doing the same kind of work that happens at Google or Facebook - building Apps, managing traffic and analyzing user data.

I spoke with Tech Workers at The New York Times about why they wanted to form a Union and how they see themselves in relation to other Workers in the economy.

She got into tech after working as a writer and Editor herself.

Samadzadeh says it’s important for her to have a say in what she builds and how it is used.

“Unionizing is the only way to introduce a Democratic process in your workplace, to kind of get a seat at the table with people in charge,” Samadzadeh says.

To Continue Reading This Labor News Story, Go To: www.kqed.org/news/11869185/the-biggest-tech-unionization-effort-is-happening-at-the-new-york-times?fbclid=IwAR0nYTu1IKqAV139wcwtOMb11oQ2PXTKKMqG8WsXEqIxFcEe9-7wf2tkI4M