âWe Were Hard Hit As A Local. We Lost (37) Members To COVID-Death And We Had More Than (1,000) Members Get Sick Or Exposed.â - UFCW Local 2013 âContinues The Fight To Protect Workers After Suffering Tremendous Lossesâ 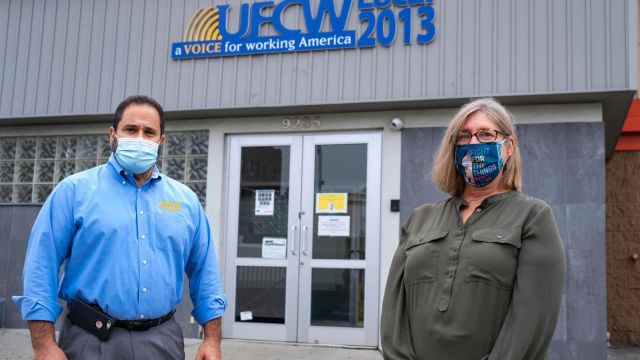 (NEW YORK CITY) - The on-going Coronavirus Pandemic has hit Workers hard, no more so then the Members of United Food and Commercial Workers (UFCW) Local 2013, which is part of the larger AFL-CIO that represents 1.3 million people from various trades.

Local 2013 Members in health care and the food, warehouse and supply chain, for instance, could not “shelter in place.”

They had to work throughout the Coronavirus Pandemic.

“We were hard hit as a Local,” President Louis Mark Carotenuto says. “We loss (37) Members to COVID-death and we had more than (1,000) Members get sick or exposed just in our local alone.”

Another 35,100 Grocery Workers and 22,000 Meatpacking Workers were infected or exposed to the virus.

Carotenuto also caught the virus last year and was sick for a month.

“The meatpacking and health care industry put so many people at risk,” the Local 2013 President says. “It was hard, because in the beginning, there were so many unknowns that I don’t think anybody was prepared for.  Particularly, those in long-term care were not ready.  We had to fight with the employers of our Members to get proper PPE (Personal Protective Equipment).”

While many employers were lackadaisical with their Employees’ well-being by refusing to release stock they had at health care facilities or dragging their feet when it came to following CDC guidelines in all industries, Local 2013 was willing to push to secure the safety of its Members.

The Union also updates its website on a regular basis with new information regarding the virus and best practices to keep from getting it.

“We fought all of last year to get Hazard Pay for our Workers, we fought to get enforced CDC guidelines on social distancing, workplace sanitizing and hand sanitizing,” Carotenuto says. “We also had to push employers to be more forthright about exposures.  We ran into instances where Workers didn’t know who was exposed.  We are understanding on the sensitivity about HIPAA Laws, we don’t want names, but we do want employers to do better.”

The Union had to make 311 calls, file grievances, reach out to the Department of Health, host press conferences and write letters to employers about the guidelines to spur employers to step up for their Employees.

“We understand this was something they haven’t dealt with previously, but knowing as bad as it was - we were the epicenter - employers could have and should have done more,” Carotenuto said. “While some have done the right thing, many more have not and that is disappointing.”

To Continue Reading This Labor News Story, Go To: www.laborpress.org/local-2013-continues-the-fight-to-protect-workers-after-suffering-tremendous-losses/