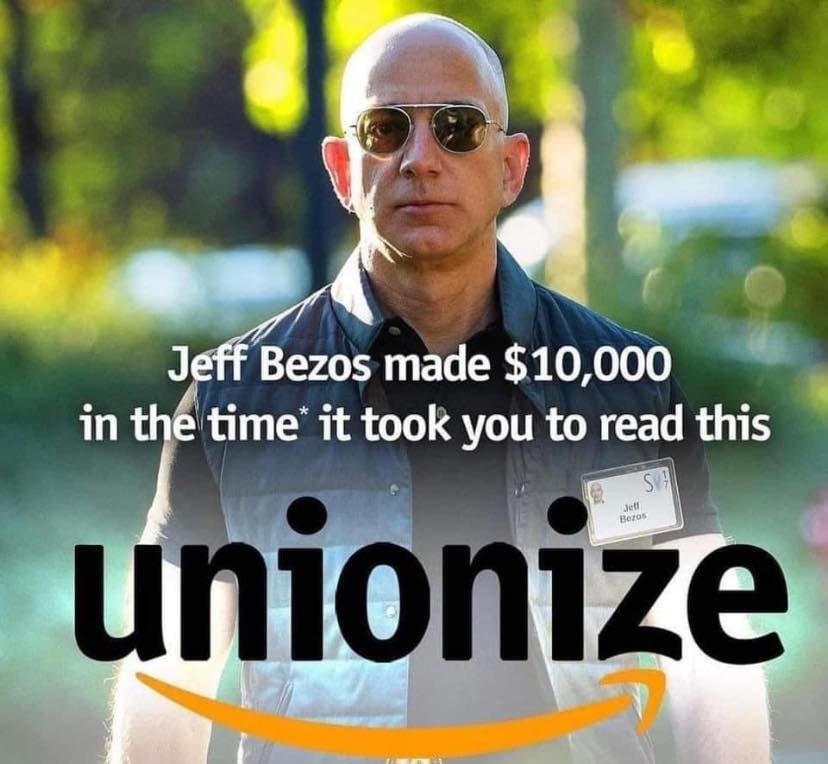 The U.S. Labor Movement has been moribund for decades, but a high-profile Unionization Drive at Amazon may be just what it needs to revive its fortunes.

That's because Amazon Workers embody a new Working Class that may start to develop the kind of solidarity that existed among Factory Workers during the last century.

The last 40 years haven't been good to Unions in America.

Since 1983, Union Membership has fallen by almost half, to the point barely one Worker in 10 is organized, but there have been some rumblings of discontent with this trend in recent years.

Some legislators have been trying to make it easier to Unionize and policymakers and thinkers have begun to consider changing the U.S. Labor System in ways that would expand the reach of collective bargaining.

And there was a small wave of strikes in 2018, which might hint at a Labor Movement that’s rising from its long torpor.

The Coronavirus Pandemic of 2020 put a damper on that newfound enthusiasm, as Workers struggled just to retain their incomes, but it might make a strong comeback in 2021.

Amazon Warehouse and Delivery Workers, frustrated by the company’s grueling work conditions, have been attempting to organize - starting with a warehouse in Bessemer, Alabama.

President Joe Biden has endorsed the Bessemer Union Drive and Amazon Workers around the country are now considering getting organized as well.

There's reason to think the Amazon Unionization Drive might be the start of a more general U.S. Labor revival.

Over the past decade and a half, as Amazon’s warehousing and delivery operations have expanded, the company has gone from being a fairly insignificant employer to the country’s second-largest after Walmart.

About one out of every 110 American Workers are now employed by Amazon.

That could affect the Labor Movement in a number of ways.

First of all, it gives Pro-Union sentiment a single high-profile opponent.

As my colleagues Nir Kaissar and Tim O’Brien documented, Amazon’s public campaign against the Unionization Drive was particularly ham-handed.

The company unleashed various proxies on Twitter to scoff at reports that Amazon Workers have to resort to peeing in bottles and defecating in bags because of their grueling schedules.

Muckraking journalists at The Intercept and elsewhere quickly obtained leaks from inside the company demonstrating that the practice is widespread.

Meanwhile, Amazon executives’ claim that the company has great working conditions, but as Kaissar and O’Brien note, it has been fined repeatedly by the government for unsafe practices.

The sheer cartoonishness of Amazon’s Anti-Union public relations campaign could clarify moral perceptions around the issue - Workers forced to pee in bottles going up against a mega-corporation where executives make hundreds of millions of dollars a year and anti-union consultants are paid $10,000 a day.

To Continue Reading This Labor News Story, Go To: www.bloomberg.com/opinion/articles/2021-04-08/amazon-union-drive-in-bessemer-alabama-resurrects-the-labor-movement