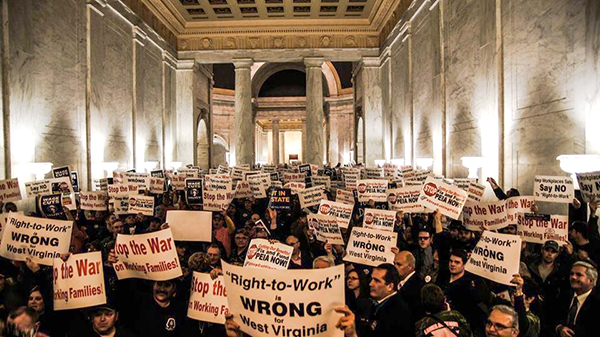 (CHARLESTON, WEST VIRGINIA) – West Virginia Governor Jim Justice’s recently held some town halls that were meant to persuade the public.  The Governor achieved his goal in at least one respect: Senate Democrats were vocal about one part of the speech they really, really liked - tweeting, “He is right.”

That was the moment Justice, a Republican, told citizens that key policies put forth by state officials in recent years haven’t paid off.

Those included Right-To-Work (for less) and the elimination of Prevailing Wage, both top priorities of the Republican wave that swept into the Legislature just a few years ago.

Justice, who also made reference to corporate tax cuts that began during the Manchin Administration, assessed those as failures at promoting state growth - but he said his current proposal to phase out personal income tax will be different.

“Really and truly, let’s just be brutally honest,” the Governor said about a half-hour into one town hall. “We passed the Right-To-Work Law in West Virginia.  And we ran to the windows looking to see all the people that were going to come - and they didn’t come.  We got rid of Prevailing Wage.  We changed our corporate taxes and we’ve done a lot of different things.  And we’ve run to the windows and they haven’t come.  We’ve absolutely built the field in a lot of different places thinking build the field and they’ll come - and they didn’t come.”

But Justice emphasized his plan to cut personal income tax by at least half won’t be that way.

Cutting the income tax, he said, will be a wise move.

“Watch and see what happens,” he said. “People will come from far and near.”

Justice also made similar remarks during another town hall: “We went out and passed the Right-To-Work Law.  We got rid of Prevailing Wage.  We built fields all over the place, in thinking that they will come.  They didn’t come, did they?”

It’s not clear if Senate Democrats are ready to accept Justice’s promise about the income tax, but they sure heard the part about Right-To-Work and Prevailing Wage.

Romano (Democrat-Harrison) chimed in: “I think we failed on both of those points.”

“I remember during those debates that there were promises made, or vows, that if it didn’t work we’d repeal ’em.  We’d take it back.  We’d admit we were wrong and be the bigger people in the room and say ‘We were wrong.  We’ll repeal ’em. Mr. President, I ask you to do that,” Romano said to current Senate President Craig Blair.

The West Virginia AFL-CIO embraced the Governor’s comments and invited him to help with repeal of the policies.

“Governor Justice has a history of switching sides so we hope this candid moment is the beginning of a reversal of West Virginia’s Anti-Worker agenda,” West Virginia AFL-CIO President Josh Sword said. “Governor Justice admitted in the plainest possible terms what Working People have known for generations: Right-To-Work is a lie that provides neither rights nor work.”

To Read This Labor News Story In Its Entirety, Go To: https://wvmetronews.com/2021/02/25/justice-says-right-to-work-prevailing-wage-fizzled-and-democrats-cheer/