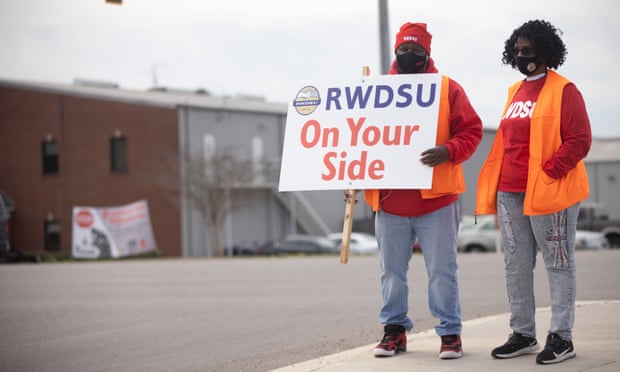 (BESSEMER, ALABAMA) - Counting is currently under way for the historic Union Election at Amazon’s Warehouse in Bessemer, Alabama and Union Organizers and Leaders throughout the Labor Movement are hoping the effort will help galvanize support for Workers and Unions in the South and across the United States.

Tevita Uhatafe, 35, a Member of Transport Workers Union (TWU) of America Local 513 in the Dallas area, was one of several Union Representatives who visited Bessemer to lend their support for the Union Organizing Drive: “I just wanted to hear Workers’ stories, see what was going on there and learn a little bit about what was going on with their lives, as well as what can we do to help these people and support this Union effort.”

The enthusiasm comes as a pivotal moment for U.S. Unions.

Joe Biden was elected on a Pro-Union Platform and told a crowd in Pittsburgh: “I’m a Union Guy.  I support Unions.  Unions built the Middle Class and it’s about time they start to get a piece of the action.”

The huge publicity the Amazon vote is attracting is a chance to inform a younger generations that have not received a lot of education on the history of the U.S. Labor Movement about the role Unions have played in Alabama, Uhatafe said.

“I really wanted to show them that there’s a new generation that’s coming up that wants to bring this movement into this generation, and show people that we really do fight for their jobs and for their livelihoods,” he added. “There’s going to be a whole lot of organizing going on if this is successful - even if it isn’t, the fuse has been lit.”

Other Labor Leaders and Workers echoed his sentiments.

“The Union Drive in Bessemer, Alabama, is going to have a ripple effect,” said Liz Shuler, who serves as Secretary-Treasurer of the National AFL-CIO, the largest Federation of Labor Unions in the U.S.

“It’s about so much more than Amazon.  It’s about fundamental power and inequality.  About a Labor Movement that’s innovating and organizing on a new frontier to take on issues like data collection, and making progress in the long march for Civil Rights.  And Bessemer is inspiring people all over the country to take collective action with their Co-Workers.  This isn’t the end, it’s a powerful beginning,” she said.

The Coronavirus Pandemic exposed poor working conditions in industries and jobs where Workers are deemed “essential” and praised as “heroes” - but often receive wages and benefits that make it difficult for them to make ends meet.

The risks posed by COVID-19 often worsened working conditions and heightened concerns about safety protections in places like Amazon warehouses that not only continued operating, but saw surges in demand and profits.

To Continue Reading This Labor News Story, Go To: www.theguardian.com/technology/2021/apr/03/amazon-bessemer-union-leaders-labor-movement-us?fbclid=IwAR0po3WdxVTXjXXk1vYmey0rXLBh4RhHwDAvSbzj90DiuO7aNiodZy65doE