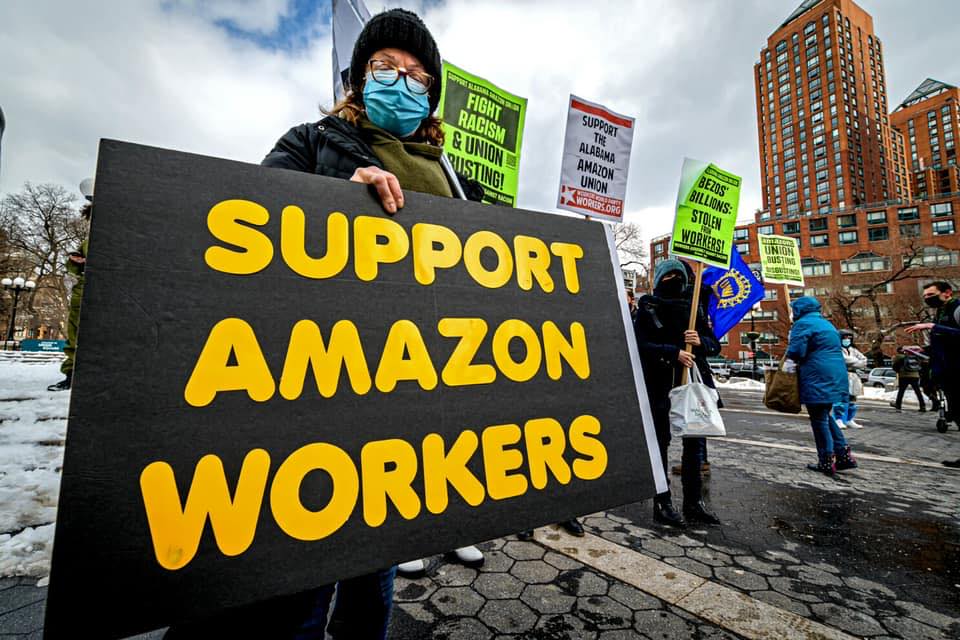 (WASHINGTON, D.C.) - Amazon repeatedly violated the rights of employees who pushed for health and safety improvements during the Coronavirus Pandemic, according to the nation’s top Labor Regulator, but a year after the global health crisis began, the company has so far faced minimal consequences.

As COVID-19 spread in the spring of 2020, Amazon employees in New York City, Chicago, Seattle, Arizona, Pennsylvania, California, New Jersey and Michigan pressured the company to slow down production and ramp up precautions by organizing petitions, press conferences and even walkouts.

Some of those Employees subsequently faced disciplinary action at work.

A few were even fired, according to charges they later made with the National Labor Relations Board (NLRB), the Federal Agency tasked with adjudicating complaints about Unfair Labor Practices and defending Workers who want to Unionize.

In going up against their enormous and powerful employer, these Amazon Workers turned to the NLRB for protection as they exercised their legal rights to discuss problems at work and act collectively to fix them.

But despite serving as the government’s primary counterweight against powerful companies restricting their Workers’ Labor Rights, the NLRB is notoriously toothless, and in its current form, has little power to penalize employers - especially those the size of Amazon, one of the Nation’s largest private employers after hiring more than 400,000 people last year.

Even when the NLRB sides with Workers, the consequences, or so-called remedies, it’s able to mete out - typically small monetary settlements, back pay, or posting a flyer - are so minor that they do little to deter employers from violating the rules again.

If Amazon Workers do persevere despite retaliation and termination and successfully form a Union, it’s only one shop at a time out of hundreds.

“From Amazon’s point of view, the NLRB is not a problem,” University of California Santa Barbara Labor Historian Nelson Lichtenstein told BuzzFeed News. “As a remedy for employer violations of the law, it’s very weak.  It can have a public role as part of a larger campaign, you can get a judgment against the company, but it’s weak.”

All eyes are now on Bessemer, Alabama, where Amazon Workers await the results of an NLRB-facilitated Union Election widely believed to be the most pivotal in the company’s history.

Indeed, even a victory at a single facility could activate Amazon Employees around the country to follow suit.

But recent events in Alabama suggest the consequences Amazon has faced so far have not discouraged the company from taking a hard line against Unions, and under current labor law, the government has little power to intervene.

That’s why, even if the Union wins in Alabama and Workers embark on the long and difficult journey to winning a contract, some Labor Leaders question whether the best path to attaining more benefits for Workers even goes through the Federal Agency in charge of the matter.

To Continue Reading This Labor News Story, Go To: www.buzzfeednews.com/article/carolineodonovan/amazon-union-labor-violations-nlrb?fbclid=IwAR2Hbm68FYYvV-Mp06QcCB609D-j9wGL3gePqJWbJZIXCE4AgyLfj79mCw0