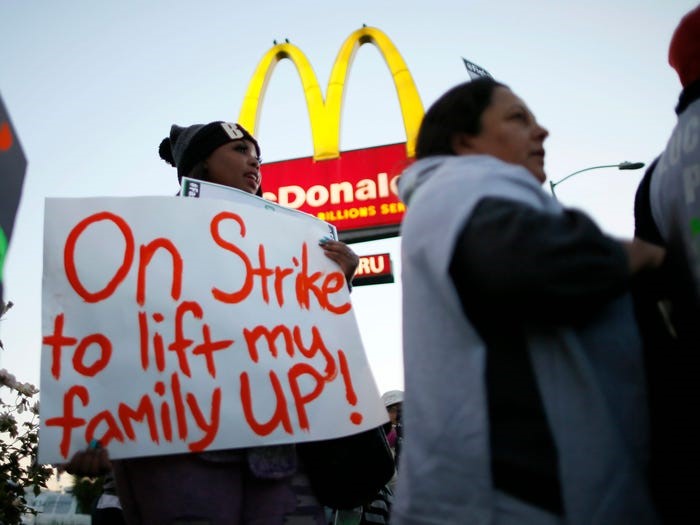 McDonald's has reportedly been collecting information on Workers campaigning for a $15 Federal Minimum Wage, including using a team of Intelligence Analysts to track Employees' Social Media.

The company has been gathering information for years, using Intelligence Analysts at its Chicago and London offices to track Workers linked to activist groups that advocate higher wages, better working conditions and Unionization, Vice's Motherboard reported.

This includes monitoring the Fight For $15 Campaign and the Service Employees International Union (SEIU) to find out which McDonald's Workers are active in the movement, Motherboard reported, citing documents it had viewed - as well as two McDonald's Workers with direct knowledge of the surveillance.

This is despite McDonald's announcing in 2019 it would no longer lobby against minimum wage regulation.

The company denied using fake Social Media accounts to gather information and said its intelligence team is focused on threats to safety, such as natural disasters and civil unrest.

The Fight For $15, which is financed by the SEIU, has been staging walkouts since 2012 to advocate for an increase in the minimum wage.

The group has targeted McDonald's in particular, whose Workers have been organizing protests calling for higher pay.

Documents viewed by Motherboard outline the aims of McDonald's intelligence services, including collecting "political intelligence on difficult political landscapes in complex markets that could cause significant business disruption," and finding out "how and where will FF$15 attack the brand."

One of the reports seen by Motherboard addressed "Ongoing FF$15 Activity Against McDonald's During the COVID-19 Crisis."

It included information like the number of in-person and "virtual" protests the group had held and the amount of advance warning Staff gave employers of their Strike action.

And since at least last year, the Fast-Food Giant has been collecting on-line data to monitor Social Media accounts, the sources told Motherboard.

This includes reconstructing the friends’ lists of those involved in the Labor Movement and using fake Facebook profiles, the sources said.

McDonald's wanted to find out "where the key players are and who they know," a former corporate Employee at the company told Motherboard.