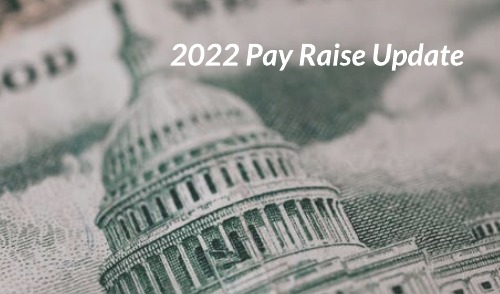 (WASHINGTON, D.C.) - The Biden Administration is expected to propose a 2.7% Federal pay raise for Civilian Federal Employees in 2022.

Agencies have been told to plan for the Federal pay raise in 2022, according to a budget pass-back document the Federal News Network reviewed and confirmed with another source familiar with the budget process.

One source said the Biden Administration is also planning several recommendations focused on the Federal Workforce, including proposals on Federal hiring and internships.

The Office of Management and Budget (OMB) declined comment.

It’s unclear whether the pay raise proposal will be part of the President’s 2022 budget preview, which the Biden Administration is expected to release in the coming days.

OMB has said it will release a top-line funding request for individual agencies, as well as guidance on some recommended priorities and investments for those agencies.

The goal is to give Congress a preliminary look at the President’s discretionary budget priorities so members can get to work on the annual appropriations process, OMB has said.

Former President Donald Trump did not include a Federal Pay Proposal for Civilian Employees in his initial budget preview back in 2017, which he released in mid-March of that year.

Employees instead learned of Trump’s intentions for Federal pay about two months later, when the administration released its full budget proposal to Congress.

Former President Barack Obama did include a pay raise recommendation for Federal Employees in his initial budget release back in February 2009, but he previewed some fairly detailed proposals on government spending in the wake of the 2008 financial crisis.

As is consistent with past transition years, the Biden Administration is expected to release its full budget proposal to Congress later this Spring, OMB has said.

If the President moves forward with a 2.7% federal pay proposal, it would be the largest bump suggested by an administration in at least the last decade.

A 2.7% Federal pay raise would be well above the 1% bump Civilian Employees received this year in 2021.

Trump proposed a 2.6% Federal pay raise for 2020, which Congress ultimately raised to 3.1% in that year’s Omnibus Spending Package.

A group of House and Senate Democrats have proposed a 3.2% Federal pay raise for Civilian Employees in 2022 via new legislation.

According to a formula set in statute - equal to half a percentage point less than the previous year’s Employment Cost Index - Civilian Federal Employees are due a 2.2% across-the-board pay raise in 2022.

That formula doesn’t account for Locality Pay, which is usually a separate determination that the President makes each year.

Federal Employees did not receive a Locality Pay Adjustment in 2021 and it is unclear how exactly Locality Pay fits into Biden’s pay plans next year.

To Continue Reading This Labor News Report, Go To: https://federalnewsnetwork.com/pay/2021/03/biden-eyeing-2-7-federal-pay-raise-in-2022/?fbclid=IwAR2R5ZI7kxYVgtVF9S_eAFSiOAxhqKM2lq4MaTCvD9m9vZ53l_LI9JyYLpk