Could The Labor Movement Make This Happen In The United States? Biggest German Union âSeals A New Dealâ - A Raise âOrâ A Four-Day Week 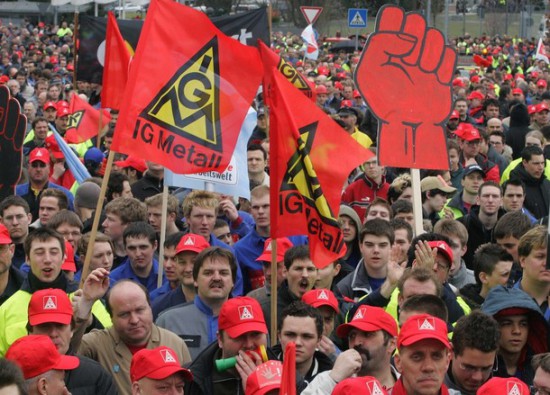 (DUESSELDORF, GERMANY) - Reuters reports Germany's largest Trade Union - IG Metall, agreed a 2.3% wage increase, to be paid either in full or as part of a switch to a four-day week, in a key industrial region, setting the benchmark for 3.9 million Metal and Engineering Workers nationwide.

Salaries will increase from July, but the additional money will not be paid out until February next year, as 18.4% of a single monthly salary, according to IG Metall.

An equivalent payment in February 2023 will be worth 27.6% of a monthly salary.

The package is structured with the aim of allowing some Workers to move to a four-day week without a significant loss of earnings.

Employers and Local Works Councils will consult on which option to take.

"This agreement offers answers to the pressing problems of our time: the acute consequences of the Coronavirus Pandemic and the structural challenges of our industries," said the influential North Rhine-Westphalia Branch of the Union, covering Germany's Ruhr Valley Industrial Heartland.

Employers had argued there was no leeway on wages due to the effects of the Coronavirus Pandemic.

However, Stefan Wolf, the President of the Gesamtmetall Employers' Association, said it was a good solution that could be adopted nationwide.

Deals agreed in NRW, home to a fifth of Germany's 83 million population, traditionally serve as a template for agreements across the country.

To Read This Labor News Story In Its Entirety, Go To: www.thechronicleherald.ca/business/reuters/a-raise-or-a-four-day-week-biggest-german-union-seals-new-deal-570142/