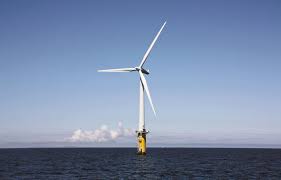 (WASHINGTON, D.C.) - Across the United States, individual states are moving away from fossil fuels and moving towards renewable sources of energy.

One of those sources is off-shore wind.

While popular in other parts of the world, off-shore wind has never really taken off in the U.S., with most of our wind production being land-based.

However, if the U.S. wants to meet the environmental goals many states have set and which were agreed to under the Paris Climate Accord, off-shore wind will be needed.

That’s why President Joe Biden took a big step to push off-shore wind by setting a target of generating 30 gigawatts of power from off-shore windmills by 2030.

To meet this goal, Interior Secretary Deb Haaland announced that the Interior Department will create a New Wind Energy Area offshore between Long Island and the New Jersey Coast.

This area will be leased out to wind companies to build off-shore wind farms.

The Interior Department also announced it was moving ahead with a key environmental review that is needed to permit the Ocean Wind Project.

The Ocean Wind project is being built in partnership with Orsted and Public Service Electric and Gas (PSEG), a utility that employs thousands of Union-represented Workers in the International Brotherhood of Electrical Workers (IBEW) and the UWUA.

Orsted built the first off-shore wind farm in the U.S. - off the coast of Rhode Island.

The White House cited studies that found the new wind area in the New York Bight will create 25,000 development and construction jobs between 2022 and 2030.

It would also create 7,000 jobs in the community supporting the project.

They also found that it could create an additional 4,000 operation and maintenance jobs annually.

The Biden Administration also believes that by generating 30 gigawatts of off-shore wind power nationally, 44,000 Union Workers will be employed in the industry and 33,000 jobs would be created in communities supported by off-shore wind activity.

They estimate that 30 gigawatts of power should be enough to power 10 million American homes a year - and prevent 78 million metric tons of CO2 emissions from entering the atmosphere.

In addition to the environmental impact that generating that much power from a renewable source would have, the creation of new wind farms has the potential to not just help Construction Trades Members, but also to help those working in manufacturing.

The Biden Administration is pushing for these wind turbines to be made in the U.S., saying that one to two new factories will be needed to be built to manufacture the components, which include wind turbine nacelles, blades, towers, foundations, and subsea cables.

They estimate that about seven million tons of steel will be needed as well.

Currently, it takes the average U.S. Steel Mill four years to produce that much steel, so this would be a huge boost to the industry.

To Continue Reading This Labor News Story, Go To: https://ucommblog.com/section/good-jobs-now/biden-creates-offshore-wind-zone?fbclid=IwAR1gCipeOkj-AUBwfk5-U6qFTPlumn6nH76Pa5O2VRIPKNCFnsTfbsuuF7M