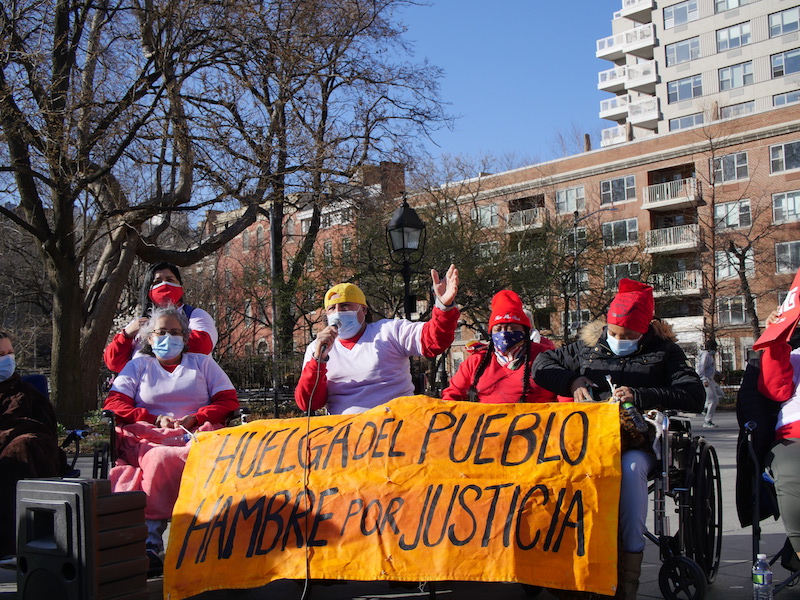 (NEW YORK CITY) - Banging pots and pans for Essential Workers may have been nice earlier in the Coronavirus Pandemic, but the estimated tens of thousands who are struggling to make ends meet without any form of State or Federal aid, need real, tangible help and there are scant hours remaining to include $3.5 billion in the New York State Budget - which is due on Thursday, April 1st, that Workers need to survive.

Earlier this week, a group of excluded Essential Workers on hunger strike gathered at Washington Square Park in New York City to repeat their calls on the State’s Democratic Party leadership - Governor Andrew Cuomo, Assembly Speaker Carl Heastie and Senate Majority Leader Andrea Stewart Cousins - to build on the $2.1 billion package that the State Senate and Assembly have already advanced.

All three powerbrokers, however, have been silent on the establishment of a $3.5 billion fund to help excluded Workers who are being denied aid due to their immigration status or having been formerly incarcerated.

“I want to know where you are and what you’re up to,” Rubiela Correa said from her wheelchair, a grassroots activist with Make the Road NY who has spent the last two weeks on a hunger strike in a last ditch effort to bring attention to the plight of excluded Workers like herself.

“If you don’t figure this out,” she said, “if you don’t resolve this budget, we are coming to you.”

Advocates for excluded Workers say that funds to help hard pressed New Yorkers pay the rent and buy groceries are available, but are not being distributed.

They also say that the poor are being made to “jump through hoops” and forced to “prove how poor they are” before they can hope to access fundamental help from government.

“The budget that the State of New York passes is supposed to be a reflection of our priorities,” Assembly Member Marcela Mitaynes said. “And this Governor has the audacity to present a budget that excludes (Essential Workers).”

Assembly Member Mitaynes, the first Peruvian woman to hold the seat representing Brooklyn voters in Red Hook, Sunset Park and parts of Bay Ridge, started her own hunger strike last Friday, saying that while she is confident her colleagues in Albany are pushing for the establishment of a $3.5 billion fund for excluded Workers - she could no longer watch what is happening to her people back home without showing solidarity.

“It is not fair that while our leader is living in a mansion, we are at risk of losing our homes,” Correa continued - as she also invoked the ongoing sexual assault scandals swirling around Governor Cuomo. “It is not fair that he abuses a woman, not just in his office, but excluded Women Workers as well.  We are in debt.  We are grieving.  We are losing.”

To Continue Reading This Labor News Story, Go To: www.laborpress.org/hunger-strikers-call-out-cuomo-democratic-leaders-for-failing-workers-on-3-5-billion-fund/