As The Union Votes Are Counted This Week In Alabama, Itâs Revealed Amazon Paid Consultants âNearly $10,000 A Day To Obstructâ The RWDSU Union Drive 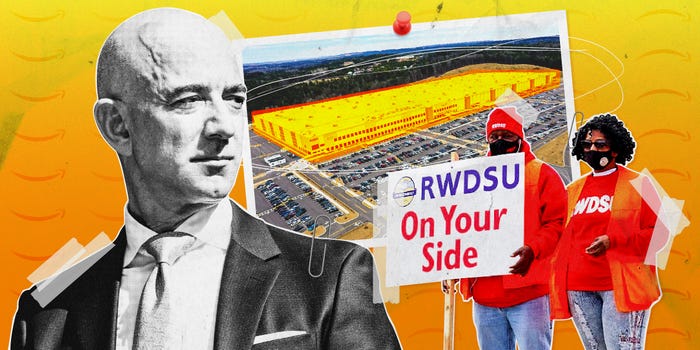 Martin Levitt - who renounced his 20-year career as an Anti-Union Consultant to write a landmark memoir: Confessions of a Union Buster, in the early 1990s - famously said that Union Busting is a “dirty business” which is “Populated by bullies and built on deceit.  A campaign against a Union is an assault on individuals and a war on the truth.  The only way to bust a Union is to lie, distort, manipulate, threaten and always attack.”

Amazon’s ongoing anti-union campaign in Bessemer, Alabama, where 5,800 Workers cast their votes by mail on whether or not to join the Retail, Wholesale and Department Store (RWDSU) Union, provides a stark illustration of Levitt’s statement.

After hiring one of the country’s largest and most expensive Union-Avoidance Law Firms -Morgan Lewis, Amazon is paid almost $10,000 per day - plus expenses to three Anti-Union Consultants: Russell Brown, Rebecca Smith and Bill Monroe.

Among other campaigns, Brown and Smith have previously run controversial, high-profile Anti-Union Drives at Mission Hospital in Asheville, North Carolina in 2020, at which Nurses preparing for the COVID-19 Pandemic were subjected to a “relentless” Anti-Union Campaign - and in 2017, at Kumho Tires in Macon, Georgia, where the National Labor Relations Board (NLRB) found that the company committed “numerous and egregious” unlawful Anti-Union actions.

As Amazon’s Anti-Union Campaign ends, the E-Commerce Behemoth will almost certainly have paid millions of dollars to its union Avoidance Consultants and law firm in order to prevent its Alabama-based Employees from choosing a Union.

The relentless, consultant-driven, Anti-Union Campaign at Amazon provides a compelling case demonstrating the need for the Protecting the Right to Organize (PRO) Act, the Labor Movement’s main legislative priority for the Biden Administration, which was passed by the House of Representatives in February 2020.

The PRO Act would almost certainly pass again in the House and President Biden supports it, but in common with most previous efforts to strengthen the Nation’s Labor Laws, it remains a longshot in the Senate.

It would limit employers’ ability to delay the Union Certification Process (and thus extend the Anti-Union Campaign).

And, it would require employers and consultants report their financial arrangement to the U.S. Department of Labor, even if the consultants avoid face-to-face contact with Employees.

In 2019, while writing for the Right-Wing Competitive Enterprise Institute in opposition to the PRO Act, Amazon’s main consultant, Russell Brown, offered a detailed insight into what he does during the course of his Anti-Union Campaigns.

Moreover, he shows how the principle role of Anti-Union Consultants is to mislead and confuse employees, not, as he claims, to educate and enlighten them.

To Continue Reading This Labor News Story, Go To: https://truthout.org/articles/amazon-is-paying-consultants-nearly-10000-a-day-to-obstruct-union-drive/