A âFarewell Messageâ From Outgoing Western New York AFL-CIO Labor Federation President Richard Lipsitz: âTo Say Iâm Grateful And Honored To Be A Part Of All Of This Would Be A Massive Understatementâ

WNYLaborToday.com Editor’s Note: Richard Lipsitz has decided to step down as President of the Western New York AFL-CIO Area Labor Federation (WNYALF), whose Regional Labor Federation’s 140 affiliated Local Unions combine to represent 145,000 Union Workers in the Public and Private Sectors and the Building Trades.  WNYLaborToday.com detailed the change in command at the WNYALF in a Labor News Story that Your On-Line Labor Newspaper published on March 15th: New Leadership At The Western New York AFL-CIO Labor Federation: ‘Lunch Pail Guy,’ 1199 SEIU’s Peter DeJesus, Jr., To Head Regional Labor Organization Whose 140 Affiliates Combine To Represent 145,000 Public & Private Sector Workers. President Richard Lipsitz ‘Agrees To Stay On’ As President Emeritus, Commits To Be There “On An As-Needed Basis” To Assist In A ‘Smooth’ Transition

The ten years since I first had the privilege of leading this organization have been filled with tumultuous events and activities.

Among these were loses and disappointments.

We have also experienced excitement, improvements and real victories.

Our Federation has grown and it is financially stable.

We have excellent relations with both the National and NYS AFL-CIO.

Further, we have a professional, highly competent Staff.

George Boger, Angela Blue (whose work life is shared with the New York State AFL-CIO), and Melissa Means, are talented and determined Workers.

They are dedicated to the cause of the Working People.

They have also become trusted and dear friends to me.

This Federation is lucky to have them.

The newly-elected Executive Board (see below) represents some of the strongest and most loyal representatives of our local Labor Movement. 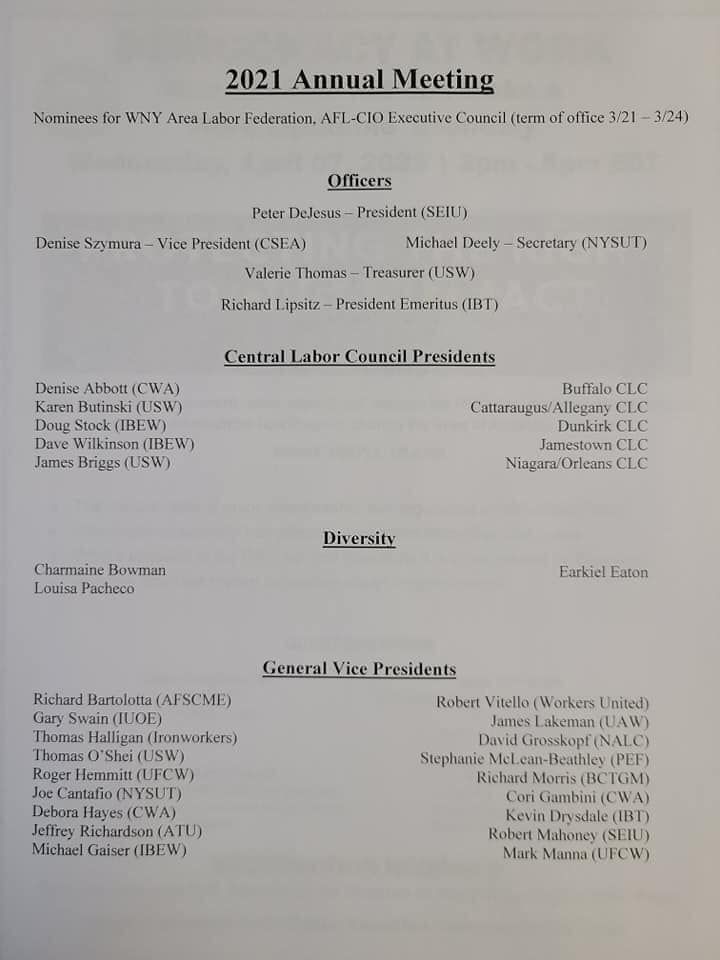 I am proud to stand with them, overwhelmed by their loyalty to the cause and grateful to count them as close collaborators and dear friends.

We have all lived through major local, national and international events: the Great Recession; the election of Barack Obama; the Tea Party Movement; the rise of Trump and American Right Wing extremism; the murder of George Floyd, Breanna Taylor and others; the COVID-19 Pandemic and the subsequent economic downturn; the election of 2020; the big lie of a stolen election; the attempt to overthrow the Biden/Harris victory; the violence of January 6th, etc., etc., etc.

For each event we have seen local ramifications and also events unique to our region: Paladino and the Buffalo School Board struggle; the national Verizon Strike; a spurt of local strikes; the struggle to keep the Children’s Psychiatric Center open; the Huntley/Town of Tonawanda struggle; the Catholic Health campaign; the New Era debacle; the Wendt’s industries organizing and first contact struggle; two contentious contract struggles at Kaleida Health; the GM National Strike; the Spot Coffee organizing victory; the organization of major rallies around children in cages (TeVemos); the organization of a major rally after Charlottesville; the massive work around support to the people of Flint, Michigan; the general and on-going work in coalition with community organizations against racism, etc., etc., etc.

We also built alliances with many elected officials around not just election campaigns, but in support of positive Pro-Worker Legislation (IDA Reform, local Apprenticeship understandings, the American Rescue Plan Act, and others).

Most importantly, we thank the many political and community leaders for their assistance in winning many of the struggles mentioned above.

Tumultuous indeed, and through it all our Federation stayed united.

We are proud to collaborate with the State and National AFL-CIO to build a culture of solidarity in all the work we do.

Our ALF is a “go to” organization where unity of voice and purpose are in the forefront of our activities.

We have also become a place where facts and logic are given priority in our decision making.

And, Sisters and Brothers, we put the class interests of Working People in the center of our programmatic work.

To say I’m grateful and honored to be a part of all of this would be a massive understatement.

There is always more that could have been done, of that I’m sure, but when isn’t that the case in our work and daily life.

Life and history never proceed in a straight line, and nothing worth doing is easy.

John Lennon famously said: “Life is what happens when you are busy making other plans” and to paraphrase from the fictional character Gandalf of the Lord of the Rings: ‘No one gets to choose when they are born.  All we have to do is decide what to do with the time we are given”.

Thank you all for the time I have been given.

Let us firmly unite and continue to struggle for a just and peaceful world when science, international cooperation and reason guide our thinking and practice.