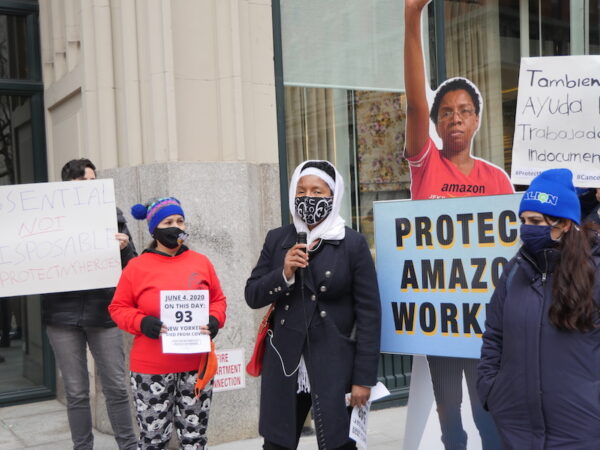 (NEW YORK CITY) - COVID-19 has killed more than 48,000 New Yorkers during the first year of the ongoing Coronavirus Pandemic and Rina Cummings, a 39 year-old Flat Sorter at the Amazon Fulfillment Center on Staten Island and mother of two, could have been one of them.

Cummings started working at the massive Amazon outlet just two months after it debuted in 2018.  Rampant spread of the virus scared her so much that she stopped working in March of last year and did not return again until this past July.

She calls the Staten Island site located on the west side of the borough between NY Route 440 and the Arthur Kill a  “hot mess” where social distancing is virtually impossible and alarming text messages alerting Employees about new infections in the workplace are routine.

“It was a disaster (last March), nobody was wearing masks,” Cummings told LaborPress during a protest held outside Amazon Mogul Jeff Bezos’ multi-million-dollar mansion at 212 Fifth Avenue.

The somber event was meant to commemorate the tens of thousands of Essential Workers who have gotten sick and died - and to call on State Legislators to pass the NY HEREO Act, which seeks to codify enforceable Workplace Safety Standards to protect the state’s 2.2 million Essential Workers who continue to toil on the front lines of the deadly and debilitating pandemic.

“Our people are still dying,” ALIGN Executive Director Maritza Silva-Farrell told the group of roughly 35 Workers who were demonstrating outside Bezos’ palatial pad.

“We need to protect Workers and our community.  We have to be responsible.  That has to happen now - not tomorrow,” Silva-Farrell

She has 16-year-old daughter in high school who is preparing for college and a three-year-old son at home - the grim possibility of infecting them with COVID-19 is an ever-present fear.

“People are getting sick and dying all across the Amazon network,” she said.

When asked, Amazon refused to say how many text messages it sent out to its Staten Island Employees over the last few weeks, alerting them about new infections within the facilities.

According to Amazon, they spent $11.5 billion on safety measures and equipment inside their facilities last year.

That includes the distribution of more than 283 million face masks and the creation of hundreds of COVID-19 testing labs capable of conducting tens of thousands of tests a day.

But Cummings - whose weekend salary still only amounts to little more than $20 an hour after Amazon cut Employee Hazard Pay back in June - said it can take three days for Amazon Workers to get their test results back.

During which time, infected Employees can still be working.

To Continue Reading This Labor News Story, Go To: www.laborpress.org/amazon-worker-calls-out-continuing-dangers-on-staten-island-presses-call-for-ny-hereo-act/