(BUFFALO, NEW YORK) – In November 2019, Communications Workers of America (CWA) Local 1168 objected to a move by Kaleida Health to transition as many as 140 Certified Medical Assistants (CMA) into lesser paid Patient Care Assistant (PCA) positions.  Now, some 17 months later, the Union has secured a landmark decision, stopping Kaleida from doing so.

This victory in the fight for job security was delivered by an arbitrator after Local 1168 filed a grievance against Kaleida in 2020 - which in effect protected the jobs and rights of its CMA Members who are employed at the Buffalo General Medical Center (BGMC) by ultimately defining what Bargaining Unit work is, which reads: “Non-Bargaining Unit Personnel shall not perform work assigned to Bargaining Unit Employees.”

In essence, it was what Unions do for their Members: Stand up for their rights in the workplace and fight an employer that would ignore an existing Collective Bargaining Agreement (CBA) that specifically spells out what was agreed to.

“You ‘can have the best wages and benefits, but they mean nothing without a Union,’” CWA Local 1168 Vice President Patrick Weisansal II told WNYLaborToday.com.

“It’s ‘true, this is exactly what Unions do’ (for their Members),” added Jennifer Hogue, CWA Local 1168 Technical, Clerical and Clinical Area Vice President, who has also been employed as a CMA at BGMC since 2017.

CMAs, Weisansal said, are Essential Medical Professionals - “the ‘eyes and ears’ of Nurses.”

So when Kaleida moved to make the switch to delete the CMAs and transition the positions into PCAs (who are represented at the medical facility by another Union - 1199 Service Employees International Union), “who have no degrees and are significantly paid less,” CWA Local 1168 “began to mobilize and story-tell,” offering personalized accounts of how the move would negatively impact the CMAs, their jobs, their livelihoods and their families, he said.

“Then COVID hit (in early 2020) and Kaleida ‘decided it was going to keep’ the CMAs (in their positions and hold off on the transition).  In essence they were saying the CMAs ‘were good enough to keep working through the pandemic, ‘but not when there wasn’t’ a pandemic,” Weisansal said.

What made the arbitrator’s decision landmark was that it totally sided with Local 1168.

“It ‘wasn’t split down the middle - it was a slam dunk’ for the Union,” he said. “It was a ‘huge test’ of our bargaining language, ‘but now - those jobs can’t be shifted.’  ‘You can’t give any work to someone else - for less.’”

“This ‘was about fighting for our Members in order for them to fulfil the commitments in their lives, like taking care of their families and paying their bills.’  It was also to ‘protect our patients who our selfless Members take care of,’” Weisansal said.

Hogue added: “This was ‘very difficult and challenging, but it’s been a big relief’ (the arbitrator’s ruling).  ‘We overcame a huge battle.’  ‘It was so hard.’  ‘People had to change their entire lives.’  Some ‘optioned into part time.’  Others were ‘laid off’ and others ‘left.’  Now, our CMAs ‘are extremely excited’ (with the ruling).  We went to school ‘to take care of our patients.’  We have two-year Associates Degrees and (Kaleida) ‘wanted to replace us with people who walked in off the street’ (without the comparable education or training).  ‘It’s okay to train people who are new, but when you have people who come in (without such education and training), our CMAs ‘already had the experience.’’”

Said Weisansal: “Our (CMAs) ‘felt like they were just a number - someone who checks in and then checks out.’  ‘Now, (the CMAs are) telling us they’ve been given a name and are recognized’ (for the hard and important work they do).”

Weisansal says Local 1168 represents and Kaleida management will start discussions in the not too distant future in order to work out a resolution and a back-pay solution.

“It will probably take a few months.  ‘So many people missed out on a lot of money.’  Some left, but some came back,” he said. 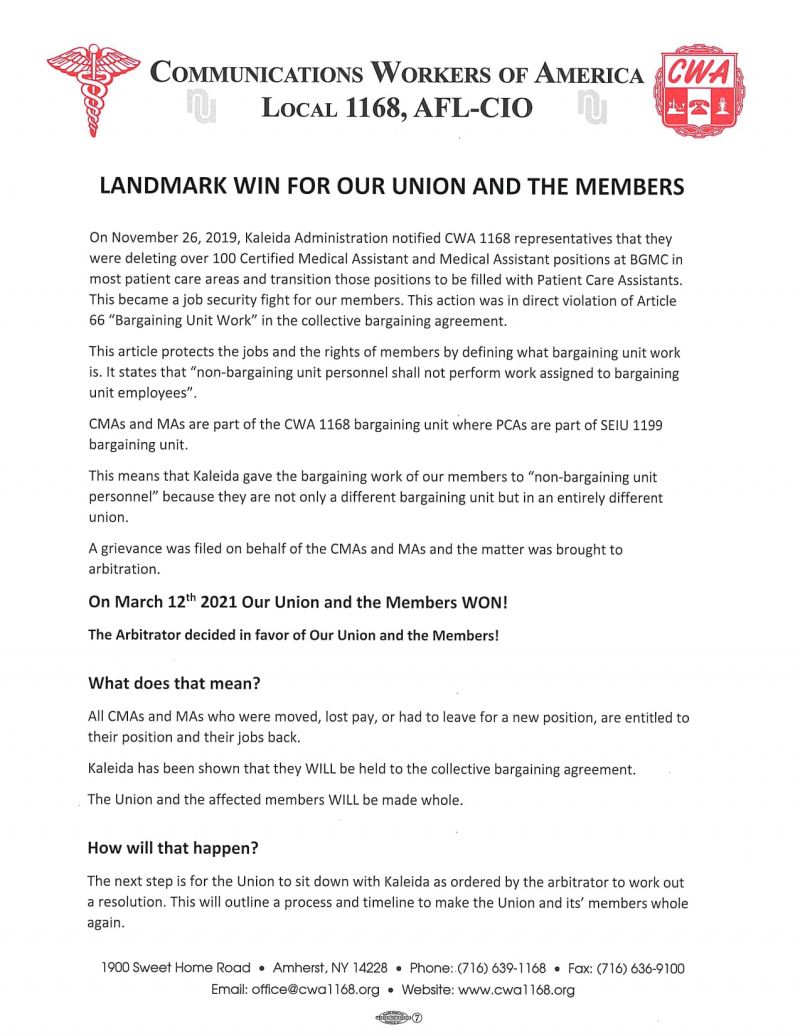