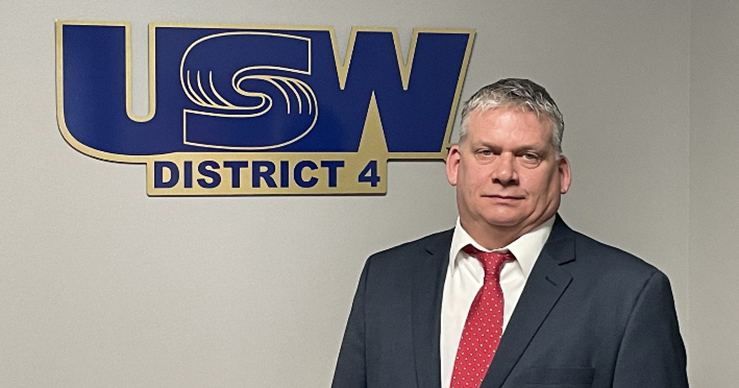 “Connecting my life in Buffalo to global supply chains and forced labor is unfortunately, and surprisingly, too straightforward,” Joe Wrona, a Member of USW Local 135L in Tonawanda, told U.S. Senators. “Eliminating forced labor from our country’s supply chain should happen today and companies who have benefited should be held accountable.”

In particular, Wrona, who now works for Sumitomo Rubber, told the committee about his prior experience at Ferroglobe’s Metal Silicate Plant in nearby Niagara Falls, which closed in 2018 while facing intense competition from unfair imports.

The company, Wrona said, had been fighting illegal trade practices in metal silicate for nearly 30 years before closing its Niagara Falls facility.

Because they produced a component used in the production of solar panels, they anticipated a boost from increased sales of that product, growth that instead went to Chinese-backed suppliers.

“While tariffs on metal silicate helped to defend our jobs,” he said, “they could not stop products further up the supply chain, like solar panels or those produced with forced labor.”

Forced labor and other illegal practices, particularly in China, have led to the destruction of U.S. jobs like the one Wrona had at Ferroglobe.

“About (45%) of the world’s supply of solar-grade polysilicon comes from Xinjiang,” he said. “The news about human rights abuses there are unacceptable.”

Those abuses, he said, include millions of Muslims under lockdown control, as well as a million Uyghurs and others who have allegedly disappeared into internment camps.

The Australian Strategic Policy Institute estimates that more than 80,000 Uyghurs were transferred out of Xinjiang to work in factories across China between 2017 and 2019, Wrona said.

“This has effectively locked the U.S. out of growing solar demand,” Wrona said. “The overcapacity in China destroys nearly any ability of U.S. companies to compete.”

To Directly Access This Labor News Report, Go To: www.usw.org/news/media-center/articles/2021/usw-member-calls-for-end-to-forced-labor-in-china?fbclid=IwAR1tnqR_dsC5XbSz1lsFla1mvG-lv5t-ajlFqEZQBCVvEqtf_qTVTsmE2vc