âDonât Be Fooled By Union-Bustingâ Bosses - âThe Only Way To Change Things At Work Is With A Legally Binding Union Agreement!â 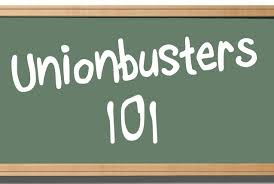 Most employers don’t want their Employees to be in a Union.

Think about it: employers go from having total control to having to share power with Workers who stand together.

Would you want someone to come to your house and tell you how to treat your dog?

Or how to set up your bedroom?

From their perspective, Workers with a Union cost more money (due to better wages) and require that they follow a legally-binding agreement, when prior to they could do whatever they wanted.

Usually when Employees show interest in organizing a Union, the company responds with an Anti-Union campaign - which may come in a form of “mandatory group meetings” to scare Workers out of signing Authorization Cards or talking to Union Representatives.

Or your employer may suddenly become interested in workplace issues and “fix” them to pacify your efforts at organizing.

Where does their new found concern come from?

Beware! - this is a tactic often used on a temporary basis until the organizing drive falls apart and employers often times go back to their old ways in a matter of weeks or months.

If you and your Co-Workers know what to expect, you’ll be able to spot your employer’s tactics from a mile away and see them for what they truly are: desperate attempts to keep things the way they are by dividing and conquering.

Once a Union Representation Petition has been filed with the National Labor Relations Board (NLRB), it’s too late for employers to offer quick fix solutions to the issues Workers care about.

Therefore, they oftentimes hire Union-Busting Firms or Consultants who specialize in misinforming Workers and use scare tactics to deflect from the real issues.

Here’s a list of tactics that Union Busters will have your employer do:

Informational E-Mails/Letters: Consultants, better known as “Union Busters,” will bombard Workers with e-mails/letters during the campaign.  Only, they will be signed not by the “Union Busters,” but by the company president, facility/company administrators - and even some well-liked managers and supervisors.

The Ugly Union Letters: These letters will paint an ugly picture of the Union.  They will tell you what the Union will force you to go out on Strike, come up with a bogus amount of Membership or Initiation Fees that you will have to pay or want you to think the Union has a lot to hide.  They will never give the Union credit for anything it has achieved for their Union Members at other locations.

Supervisor Pressure: Often Union Busters will not talk to you directly, they will use your supervisors or department leads as messengers to carry their negative information against the Union to you - delivering letters, informal chats and even speeches prepared by the Union Busters.

Love Offerings: Union Busters may tell management to hand out larger than expected wage increases and/or improved benefits or do away with discipline techniques they have in place (for example: an attendance point system).  The purpose of this is to show you that you don’t need a Union to get things done and to convince you that the boss “cares” about your concerns and that you do not need an “outsider” to change things.

Let’s Be Pals: Administrators/Supervisors/Leads will be everywhere, walking the floors day and night, setting up spur-of-the-moment meetings so that they can fix what’s on your mind.  You might even be invited to lunch or surprise you and your Co-Workers with pizza or lunch!

To Continue Reading This Labor News Report, Go To: https://ufcw888.org/dont-be-fooled/#page-content