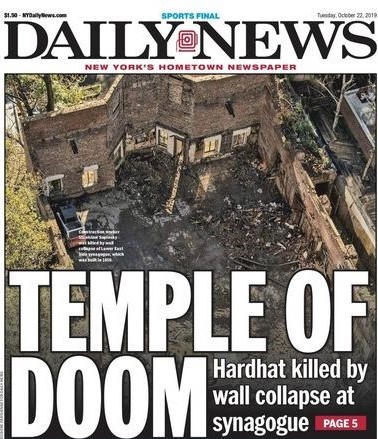 (NEW YORK CITY) - Construction fatalities accounted for more than 25% of all worker deaths in New York City after increasing for the third year in a row, according to a new study issued by the New York Committee for Occupational Safety and Health (NYCOSH).

While movers and shakers like to measure the city’s progress in projects and developments, the breakthroughs often come at a deadly cost - and Construction Workers pay the price at a rate that outpaces the Nation, where only 19% of all Worker deaths can be attributed to the Construction Trade.

Researchers relied on data from 2019, the year statistics on construction deaths was most recently available. They said it would be difficult to assess the numbers from 2020 because the Coronavirus Pandemic brought construction to a halt.

“Construction continues to be one of the most dangerous industries in the country, with Workers risking their lives every day to build New York,” according to the Deadly Skyline annual report issued by the NYCOSH.

According to the study, New York City’s construction death toll increased in 2019 for the third year in a row.

The lowest number of fatalities during that stretch was in 2011, when there were 14 construction deaths.

Across the country, construction is one of the most dangerous industries for Workers, accounting for 1,061 out of 5,333 Worker fatalities in 2019 or 19%, despite Construction Workers making up just 4% of the Nation’s Workforce, the report said.

Hispanics make up a disproportionately high percentage of Worker fatalities in New York.

Researchers said the Hispanic Construction Worker death toll is high in New York because they are routinely exploited by employers who willfully violate safety and health protections on the job.

The Workers, many of them Immigrants, are less likely to report violations out of fear, the report said.