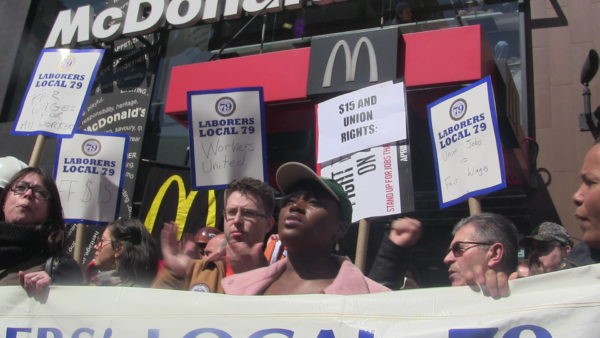 (NEW YORK CITY) - Trade Unionists and Worker Allies instrumental in disposing Donald Trump and delivering both the White House and U.S. Senate to Democratic Party control are feeling burned - especially Women, who constitute the overwhelming majority of Front Line Workers who continue to risk their lives, and the lives of their families during the on-going COVID-19 Pandemic.  The inclusion of a $15-an-hour Minimum Wage in President Joe Biden’s signature $1.9 trillion American Rescue Plan could have helped lift tens of millions of poor and low-income Women out of poverty.

Instead, the decision of eight Senate Democrats to oppose the measure, and the Biden Administration’s failure to challenge arcane parliamentarian procedures supposedly prohibiting a $15 Minimum Wage in the latest Coronavirus Relief Package - has left a bitter taste in the mouths of many who helped get Democrats elected and a fiery determination to press the fight until it’s won.

“During the Presidential Election we had over (1,700 of these) laid off Hospitality Workers knocking on doors of three million voters in four Battleground States - and that made a critical difference in the results,” UNITE HERE Local 23 President Marlene Patrick Cooper says.

Members of Local 23 - the overwhelming majority of them Women of Color suffering pandemic-related layoffs - went on to join other Worker Advocates in knocking on 1.5 million doors in the successful effort to elect Democrats Jon Ossoff and Raphael Warnock to the U.S. Senate from the State of Georgia.

“Our folks sacrificed time away from home and their families canvassing, knocking on doors, to get out the vote because their lives depended on it,” Cooper says. “Now, it’s time for us to continue to hold this administration accountable and push them to pass transformative legislation for Working People.”

According to the Poor People’s Campaign: A Call for a Moral Revival, Women constitute almost 60% of Low-Wage Workers who have all been hit hardest by the pandemic.

“I left my home, I left my (90-year-old]) Dad, I left my sister, I left my fiancé - I left everyone here and risked my life to go to Georgia during a pandemic to make sure I could have a better future, and I’m coming back home and we still don’t have ($15?).  Why?” Ford says. “Does no one think we don’t deserve it - that the job that I do is so nothing?”

Recent history make it clear, that’s exactly what millionaire political elites on both sides of the aisle think.

Whether that’s Democratic Senator Joe Manchin who can’t bring himself to match the insufficient $12-an-hour Minimum Wage Hillary Clinton advocated for way back in 2016 or Representatives like Michigan’s Tim Walberg, who last month moaned during a House Education and Labor Committee meeting that the aborted Raise the Wage Act “doesn’t deal with the realities of what it takes to run a business.”

The current $7.25-an-hour Federal Minimum Wage has not budged in more than 10 years.

The Sub-Minimum Wage for Tipped Workers is just $2.13 and hasn’t moved in 30 years.

“I broke my ankle in Atlanta and I’ll do it again for this ($15) an hour,” Ford says. “I refuse to take pennies while people live in mansions.”

To Continue Reading This Labor News Report, Go To: www.laborpress.org/many-workers-remain-angry-15-minimum-wage-failed-to-make-it-into-bidens-america-rescue-plan/