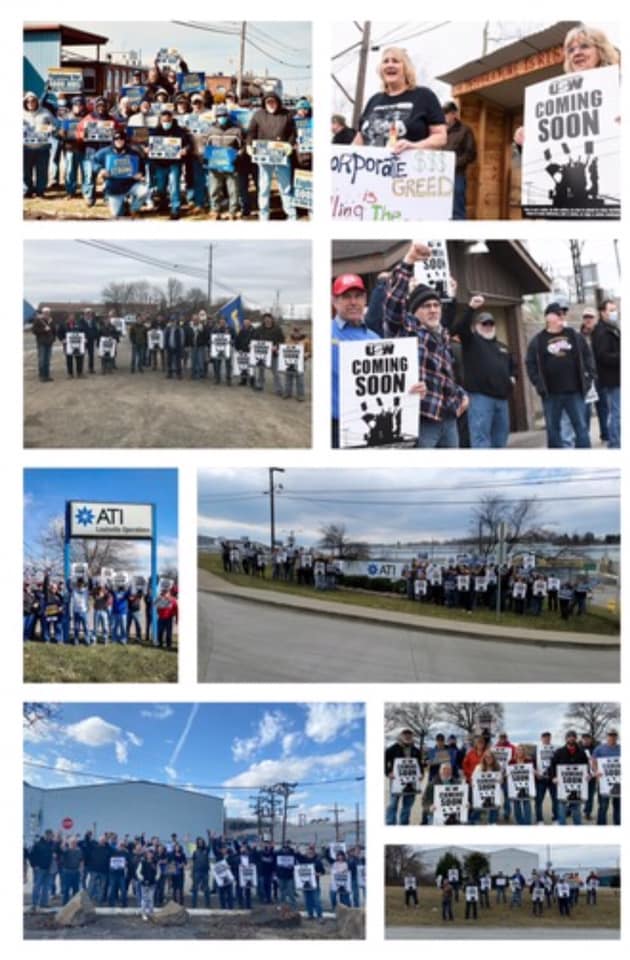 (LOCKPORT, NEW YORK) - United Steelworkers (USW)-represented Allegheny Technologies Incorporated Employees held an informational picket outside the company’s Lockport Plant in Niagara County on Tuesday (March 16th), just days after 95% of the company’s 1,300 Unionized Workers across the country agreed to authorize a possible Strike after more than a year of stalled contract negotiations.

The USW’s current agreement with ATI expired on February 28th, 2021 - and while the Union agreed to extend the agreement as negotiations continue, the USW and its Members employed at ATI have become increasingly frustrated by the company’s proposals.

And many are still angry over ATI locking out 2,200 USW-represented Workers at 12 plants in six states for six months before the USW and the company eventually agreed to a new four-year agreement in 2016.  The lockout was the first in the company’s history.

“Our Members are fed up,” USW Local 9436-7 President Michael Swan, who is part of the USW Bargaining Team, told WNYLaborToday.com after the conclusion of Tuesday’s picket.  “We’re meeting again in Pittsburgh on Friday (March 19th) to decide whether to (Strike) or not.”

Swan said the Union and its Members employed at ATI are upset over a number of company proposals, including - but not limited to, a two-tier health care system, a company-sponsored health care plant that ATI “can change at any time and the Union cannot grieve it” and a company plan to eliminate profit-sharing which “negatively impacts our Retirees.”

ATI’s Lockport Plant employs 38 USW-represented Workers, many of whom were joined on the informational picket line with ATI Retirees, Swan said.

USW-represented Workers picketed Tuesday at several ATI sites (Pictured Above/USW Photo Collage) across the country.  Swan said a second informational picket is set for Thursday outside the Lockport plant, a day before he travels to Pittsburgh.

“We are going through a challenging period, and unfortunately, ATI has responded to these challenges by demanding its Employees accept a sweeping series of concessions with sub-standard wage offers and demands for USW represented Employees to pay health care premiums.  Under these circumstances, a Labor dispute is a very real possibility, so we must be prepared.  Your bargaining committee will not do anything to jeopardize Members’ jobs and we will do everything we can to avoid a dispute.  We know that the best way to prevent a Labor dispute is to prepare for one,” the USW said in a statement.

If a Strike is held, it will be the first against ATI since the mid-1990s.

The USW claims ATI is demanding a four-year agreement that “erodes most everything that we have gained over the years, including wages, health insurance, contracting out protections, overtime pay and scheduling.”

The USW seemed hopeful the Strike Authorization vote might prompt ATI to renegotiate to avoid a Strike: “It is clearly in the best interest of everyone to resolve the outstanding issues through collective bargaining without a work stoppage, but ATI must change its approach before we can achieve a fair contract.  We urge ATI to return to the table and negotiate in good faith rather than engage in Unfair Labor Practices and to demand unnecessary and unfair concessions from Workers, who have not had a wage increase since 2014.”

For More On This Labor News Story, Go To: https://triblive.com/local/valley-news-dispatch/weve-had-enough-95-of-united-steelworkers-support-striking-against-ati/