Labor Perspective From WNYLaborToday.Com Editor-Publisher Tom Campbell: âLet Me Educate You, Weâre A Union Media Outlet. We Donât Ask Management For Their Comment Or Their Side Of The Story.â 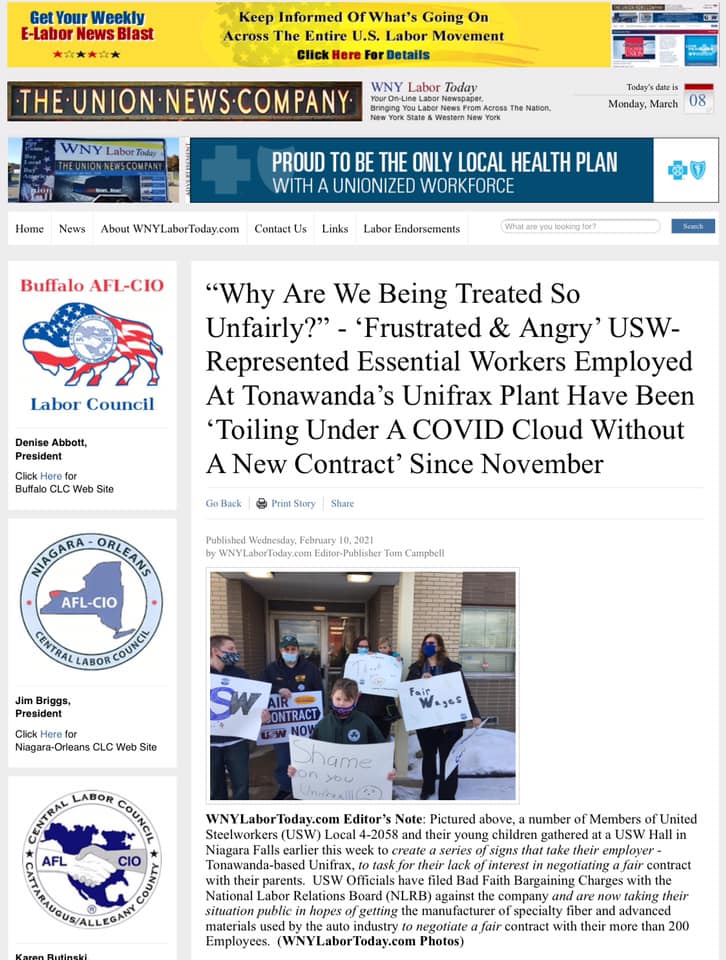 It’s been awhile since I’ve penned a Labor Perspective, but I thought it would be appropriate after a recent call I fielded from a representative at Tonawanda’s Unifrax Plant, who was upset with WNYLaborToday.com over a story we’d published in early February that concerned their United Steelworkers (USW)-represented Workers, who asked why they were being treated so unfairly while toiling under a COVID cloud as they continued to work without a new contract.

But before I get into it, let me first ask that you first take a moment to read our report, headlined: “Why Are We Being Treated So Unfairly?” - ‘Frustrated & Angry’ USW-Represented Essential Workers Employed At Tonawanda’s Unifrax Plant Have Been ‘Toiling Under A COVID Cloud Without A New Contract’ Since November (www.wnylabortoday.com/news/2021/02/10/buffalo-and-western-new-york-labor-news/why-are-we-being-treated-so-unfairly-frustrated-angry-usw-represented-essential-workers-employed-at-tonawanda-s-unifrax-plant-have-been-toiling-under-a-covid-cloud-without-a-new-contract-since-november/) before you resume reading this Labor Perspective.

Welcome back, so this company representative was upset over a number of comments made by USW Officials and Members, calling them “inaccurate.”

Then this Unifrax Representative charged WNYLaborToday.com with “breaking a rule of Journalism - not getting ‘both’ sides of the story.”

Well, I did not appreciate being scolded by a company representative who was more concerned about the alleged inaccuracies of a Labor News Story rather than the fact the Unifrax Employees were nonetheless continuing to report to work during the Coronavirus Pandemic to do their jobs, even though their previous contract had expired several months earlier.

So, I took the opportunity to educate her as to what WNYLaborToday.com is and how we report Labor News:

Number one, WNYLaborToday.com is a LABOR Media Outlet.  We report LABOR’s side of the story.  We have NO INTEREST in what management has to say.  We are not a mainstream media outlet, which - incidentally more times than naught, fails to reach out to Organized Labor for their side of the story when reporting on a Labor issue or issues, opting instead just to interview management.

Number two, I made it very clear to the Unifrax Representative that she and the company she worked for should be more focused on negotiating a fair and decent successor contract for its USW-represented Workforce, who are continuing to show up for work as ESSENTIAL Workers.

It seemed to me that there should have been at least of shred of interest and compassion for their well-being during the COVID-19 Pandemic, not only for the individual Worker, but the families and children they leave behind every morning and come home to every night.

Third, I did make her aware that I would be more than happy to quote her or any Unifrax Representative AFTER a fair and decent contract was negotiated.

And, better yet, I told her it would be of great editorial interest to WNYLaborToday.com should Unifrax and the USW agree to form a beneficial and positive Labor-Management relationship that could also work together to do good things in the Tonawanda community where the plant is located.

And, I also make her acutely aware of my Journalistic background: Six years as a Reporter for United Press International (UPI) - the worldwide news wire service; Six years as a Reporter at Business First, Buffalo’s weekly business newspaper; More than 20 years running a Public Relations Firm that worked exclusively with Organized Labor; and now 14 years as Editor-Publisher of WNYLaborToday.com – an On-Line Labor Media Outlet based in Buffalo, but read across the United States.

By the way, there was nothing but silence on the phone after I gave her that rundown.

So, here’s what I want to say to the Labor Movement and its Leadership:

Organized Labor - here in Western New York, across New York State and the Nation, I would like to remind you that you have a media outlet that is dedicated to telling YOUR story without any comment from the other side.

WNYLaborToday.com, in essence, has become a Union Storyteller, viewing all stories from the angle of the Union-represented Worker - not management.

And many of the stories WNYLaborToday.com tells are NOT REPORTED on by the mainstream media, including daily and weekly newspaper, radio and TV stations.

That’s true, of course, because the mainstream media is NOT INTERESTED in the Labor Movement unless it involves a picket line, a strike or worse yet - an indictment.

With that said, there are only a handful of true and independent Labor News Media Outlets left across the United States.

Several have closed up shop over the last several years because they have failed to receive monetary support from Labor Unions and advertisers.

WNYLaborToday.com is heading into its 14th year in April of providing our visitors and readers with an array of news reports and video coverage not found in any one place across the entire Internet.

In fact, we publish - on average, more than 120 Print Labor News Stories each month.

Last year, the Western New York AFL-CIO Area Labor Federation asked WNYLaborToday.com to consider taking down our subscription pay wall - which I agreed to for a period of three months.

But as COVID continued, and with the November Presidential Election only months away, I made a personal and business decision to keep it down in order to help educate Union Members to the many issues that both positively and negatively impact them.

That has always been the case, from day one - educate Union Membership.

I was pleasantly surprised that in the months to come, WNYLaborToday.com’s readership has increased by 30% to 50% - with more than 750,000 page views registered in a little more than six-months-time.

That was extremely gratifying because the increase did not just come from Western New York, nor just from across New York State - but from across the Nation.

With more than 20,000 Social Media connections on Facebook and LinkedIn, WNYLaborToday.com has grown and been introduced to those we would have never had a chance with, partly due to our subscription pay wall coming down.

But as we enter Year 14, WNYLaborToday.com still needs support from Organized Labor and advertisers – and, I am happy to report, several Unions have made decisions to come aboard our Front Page in recent months, including: Amalgamated Transit Union (ATU) Local 1342; National Association of Letter Carriers (NALC) Branch 3; and Laborers Local 210.

In addition, New York State Nurses Association (NYSNA) has made a verbal commitment to do the same.

Several new advertisers have also came aboard and I ask that our visitors and readers also support them, because their advertising commitment also helps WNYLaborToday.com do what it does best - bring you the latest in Labor News from across Western New York, New York State and the Nation.

We are here to assist the Labor Movement in getting its message out - unimpeded.

And, we are proud of the fact that we are entering our 14th year in April.

It is our hope Labor Unions and their Leadership also view Your On-Line Labor Newspaper as an important tool in getting their message out.

And, we’re happy to continue to tell management where to go when we’re asked why we didn’t give them a call to get their side of the story.