Women In Construction - âBuilding A Dream, One Brick At A Timeâ 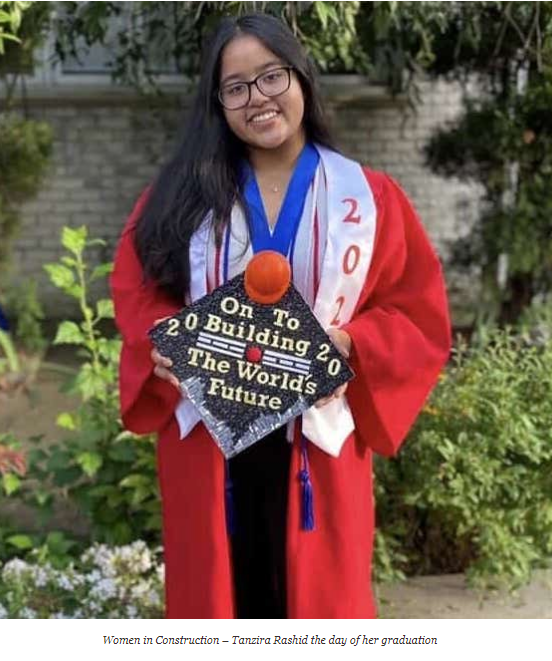 Ever wonder what’s the story behind the women in construction?

Traditionally, such a man’s job, why would women even think to go into it?

Tanzira Rashid, an 18-year-old studying Civil Engineering at Rensselaer Polytechnic Institute in New York, shares her insight as she’s been quite literally building her own successful road.

Rashid - who is a first generation American, of Bengali descent, decided to study Civil Engineering because of her love for construction, but this wasn’t always her plan: “Coming from an Immigrant family, I wasn’t really exposed too much, just because my parents didn’t know much.  My Dad was a Taxi Driver and my Mom was a stay-at-home Mom.  In their minds they came to America for the ‘American Dream,’ to have successful kids, so pretty much they thought the only way to become successful was to become a doctor.  I ended up getting into a high school with Construction Trades, engineering and architecture tracks.”

FELDSZTEJN: When did you realize you actually liked this field?

RASHID: In high school I learned electrical work and carpentry work, and I really liked carpentry.  I wanted to go to Trade School, but I also wanted to work in construction overseeing everything, being able to read and create the plans, and being in charge.  Then in tenth grade, I got an internship with a company that did water treatment and my supervisor was a Civil Engineer and I ended up actually getting really interested in it, and I got to go on sight visits. From them I found out about ‘Tools and Tiaras,’ and that’s when I realized I actually liked this construction field and that I wanted to pursue it in the future.  Tools and Tiaras is this non-profit that exposes young girls and women to hands-on projects in different areas of the construction industry through different activities and programs creating a pipeline of women in construction.

FELDSZTEJN: What is your experience like at Tools and Tiaras?

RASHID: They’re amazing. You get to meet other Tradeswomen that are in fields that I would have never known.  There are so many women who really motivated me and empowered me to be like ‘OK, I can do this, and this isn’t just for men.’  The first year I went to summer camp with them it was very hands-on, for instance we got to build bookshelves to donate.  It was a really nice experience, very humbling and inspirational.  It’s like a big family.  We all help each other out.  Since I’m more of a younger team member, some of them allow me to go on job sites with them and tour some of the sites, seeing how they work.  The older ones help each other find jobs and spread information.  We just want each other to succeed and achieve our goals.  So it’s a very safe place.

Rashid participates in many programs, projects and organizations.

“During high school I really wanted to explore what I wanted to do in the future, so I took a lot of the opportunities that were presented to me.  And one was the Cooper Union Saturday Program.  We had to think of a problem and create a prototype, gadget, or something that could solve or alleviate it.  So one of our group members had an autistic cousin, and we thought about some issues that came up with that, and one is that these kids like to wander and sometimes they can get lost.  But it’s also very good for them to go out and walk and experience the world.  So we built up a prototype of connecting bracelets where one would be on the child and the other one on the parent, and after a certain distance, if the child goes too far, the parent’s bracelet would start beeping, so they could check on their kid and make sure they’re ok.  We ended up getting first place, so it was a really nice experience.”

To Continue Reading This Apprenticeship And Training Labor News Story, Go To: https://redshoemovement.com/women-in-construction-building-a-dream-one-brick-at-a-time/