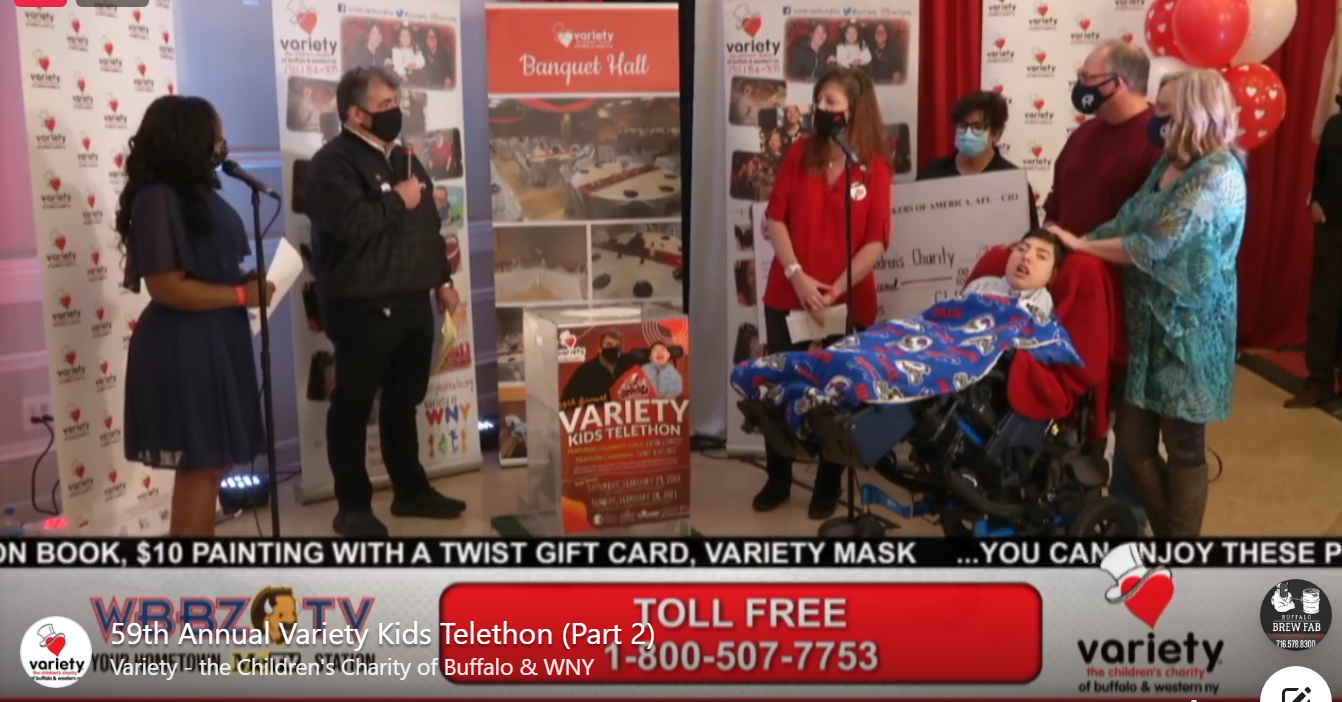 (BUFFALO, NEW YORK) – The 2021 Variety Club Kids Telethon raised nearly $800,000 over the weekend, including more than $33,000 that came from donations made by Labor Unions and their Members, which prompted Telethon Chairman and Teamsters Local 264 Representative Tony Vaccaro to say he “couldn’t be happier or more proud to be associated with” Organized Labor and its Membership.

Dealing with the implications of the Coronavirus Pandemic and the fact the annual telethon itself was in doubt just a couple of months ago, a total of $787,264 was raised over the two-day, televised weekend event that aides Oishei Children’s Hospital in Buffalo, the Robert Warner MD Rehabilitation Center and other children’s charities across the region.  The total included $33,376 donated by a number of area Labor Unions and their Members.

“We ‘knew’ this year ‘was going to be a challenge and the telethon was an open question,’” Vaccaro (pictured above, holding a microphone during the telethon) told WNYLaborToday.com, “but it was a ‘complete team effort’ and ‘I can’t put it into words’ (his reaction as to what was raised).  ‘I couldn’t be happier or more proud to be associated’ (with the Western New York Labor Movement).  With ‘so many’ Workers having been laid off (during the COVID-19 Pandemic) and Essential Workers, ‘who we take for granted’ - ‘Labor still came through.’”

Western New York AFL-CIO Area Labor Federation (WNYALF) President Richard Lipsitz called the fundraising effort “pretty ‘damn’ impressive,” telling Your On-Line Labor Newspaper: “COVID ‘has wiped out so many face-to-face meetings and it is always more exciting to have lot of people there and involved.’  ‘But we can all be proud of our (Union) Affiliates who came through (in the age of COVID), which was even more remarkable.’”

Western New York’s Labor Unions and their Members have “supported the Variety Club Kids Telethon for years,” Lipsitz added, but it is “one of three charities Labor has and is currently supporting, ‘including a great amount of extra money we raised through a recent meat raffle for the United Way of Buffalo and Erie County and the money we are continuing to raise for FeedMore Western New York, which is more than ($30,000) with a few more weeks to go.’”

“Talk about the ‘generosity’ of Organized Labor and its Members - ‘things they are doing to help people.’  ‘We are so proud of that,’” he said.

Taking into consideration the negative economic impact the Coronavirus has created, Variety Club Executive Director Richard Goldstein had told WNYLaborToday.com in an interview before the telethon that he would be pleased with hitting the $500,000 mark, despite the fact the annual effort raises around $1 million.

In the end, the nearly $800,000 exceeded his initial expectations.

“And ‘that’s attributed to the people (of Western New York).’  It was a ‘marvelous response.’  ‘They would not let COVID beat us,’” he said.

Goldstein, meanwhile, raved about the role Organized Labor played in this year’s telethon, notably two local Unions - United Auto Workers (UAW) Region 9 and Communications Workers of America (CWA) Local 1122, which both opened up their Union Halls and provided the Variety Club with a number of their Members to take credit card donations over the phone.

“We ‘had more than ($200,000) in credit card donations,’” he said.  “So ‘it just wasn’t the money donated’ (individually by Western New York’s Labor Unions and their Members).  ‘They stepped up and provided a lifeline by answering phones and gave us two outside venues.’  ‘They opened their doors for us.’”

Goldstein also singled out the Members of NABET (National Association of Broadcast Employees and Technicians) Local 25, who lent their talents and skills to help televise the two-day event, which took place at two different Buffalo TV Stations.

Buffalo AFL-CIO President Denise Abbott, who also serves as Health and Safety Director for CWA Local 1168, attended and spoke at the telethon (pictured below), told WNYLaborToday.com: “I am ‘utterly thrilled’ with Labor ‘coming out for such a worthy cause, as it always does.’  Our Unions and the Members ‘stood up and helped out.’  Many of our Members ‘have children with an illness that requires (the help) of Buffalo’s Children’s Hospital.’  ‘It feels good when your heart gets a little bigger for such a great cause.’” 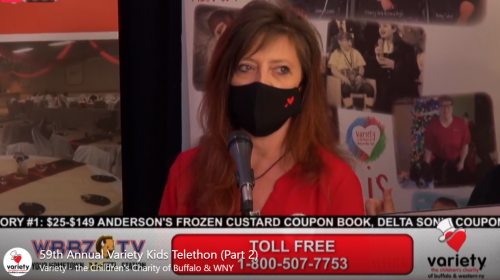 Abbott also praised Telethon Chairman Vaccaro, saying: “I’m ‘even more pleased Variety chose Tony as its Chairman.’  ‘His incredible passion (for Variety Club and the Telethon) shows every time he talks about it.’”