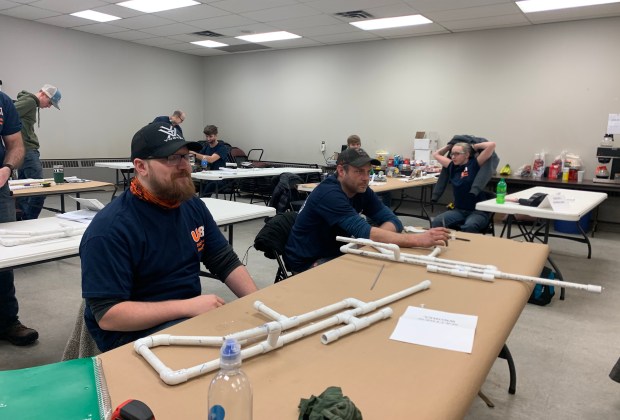 Attendees at the sessions, which lasted most of the day each day, learned a variety of Trade skills.  The lessons included work held both indoors and out and the Workers even had the chance to build their own marshmallow gun out of PVC pipe (pictured above).

Organized by the local Building Trades and led by Marcus Williamee and Aaron DeBolt of Plumbers and Steamfitters Local 267 - among others, the training gave Workers a chance to get a taste of the trades, a small window into the process before having to commit to any sort of official Apprenticeship Program.

"I think people are starting to understand that getting a job in the Skilled Trades can be very rewarding, both financially and as a career," DeBolt said, with a potentially increased interest due to the COVID-19 Pandemic induced economic downturn.

"I think that the word is getting out.  Before it was 'Oh, I'll use the Trades as a backup plan.  I'll go to college and try to be a Banker or whatever it might be,' and then they try to come into the Trades," he said.

DeBolt said his Union has recently witnessed an increase in younger people interested in the training, pointing out three high schoolers in attendance.

He thinks that as Labor Unions show they are able to adapt to changes with construction work and guidelines, people will continue to be interested in getting involved.

With the advent of the Ithaca Green New Deal locally, DeBolt said even though construction is changing - the Building Trades Unions have been uniquely equipped to incorporate any changes into their training sessions.

“We're here to adapt with it and not make excuses for why the olden days and ways were the best ways," DeBolt said. "I think that people are seeing that, and they're seeing opportunities to come to things like this and test it out, and maybe get a leg up over an applicant who didn't."

Brandon Bacharach was one of the Workers in attendance after having owned and operated his own small business.

He had been working as a handyman, but wanted to become more specialized and also sought the security of a Union-represented jobs.

"What I've been doing was all over the place, very jack-of-all-trades," he said. "I wanted to focus on something and become more of a Craftsman.  Then there's the financial security, and just becoming very skilled at one thing.  I looked around at what other places would pay and it just doesn't compare."

To Directly Access This Labor News Report, Go To: https://ithacavoice.com/2021/02/labor-unions-hold-workshop-to-attract-workers-amid-economic-crisis/?fbclid=IwAR0iRpfxoCepeptiI5vodduGQy69nxCzFKfgYO1V3sgaJGEZyTf6AfPvX1g