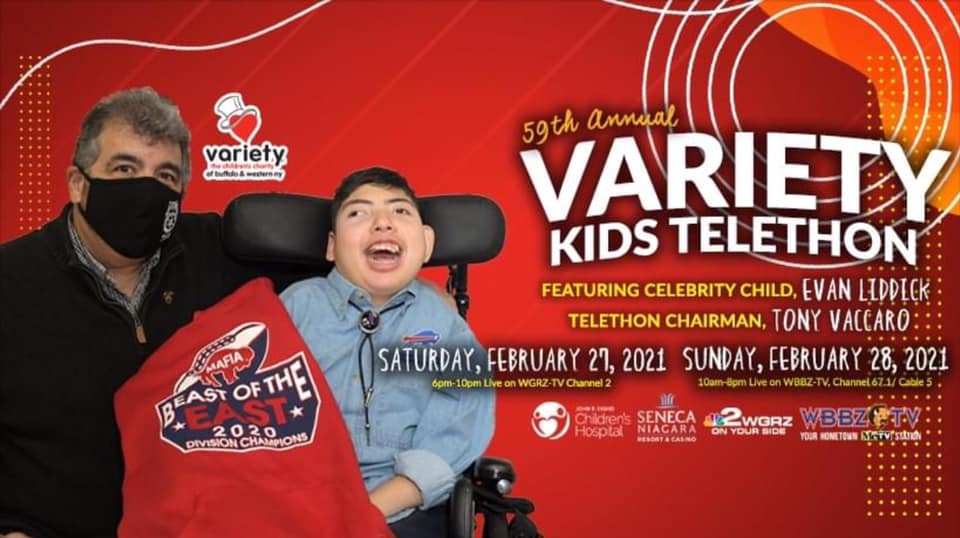 (BUFFALO, NEW YORK) – In this Age of COVID, the 59th Annual Variety Club Kids Telethon will be very different in 2021 than in years past, but one constant will remain the same: the Western New York Labor Movement will play a key role in helping raise donations to benefit Oishei Children’s Hospital in Buffalo.

Teamsters Local 264 Business Agent Tony Vaccaro (pictured below), who has a long history himself of being involved in the Buffalo event and who also sits on the Variety Club’s Board of Directors, will serve as Telethon Chairman - marking the first time a local Labor Leader has held that role in the history of the major fundraising event that also aids the Robert Warner MD Rehabilitation Center and other children’s charities across the WNY region. 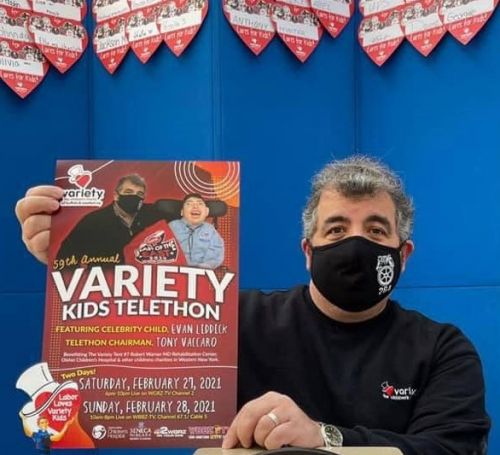 It was Vaccaro who was helping search for a special needs child for this year’s telethon who eventually found Evan, who is now 13, through one of his Union’s Members.

“I ‘fell in love with kid,’” Vaccaro tells WNYLaborToday.com “He ‘is just a joy.’”

Preston, a Local 264 Member for the past 18 months, drives a school bus in the Lakeshore Central School District.

Another Teamster-represented Member who works in the school district reached out to her after speaking with Vaccaro, who was making the rounds to inquire whether there was any local Teamster Member who had a special needs child that would meet the criteria to be considered this year’s Telethon Celebrity Child.

“This was a ‘perfect fit’ for us,” Preston tells Your On-Line Labor Newspaper.  “We connected with Tony and had a phone conference with Variety and Children’s Hospital, which turned out had Evan’s doctor (on the line), who’d taken over the Warner Center. “

“We’re ‘excited about this, but it took a different twist,’” she continued.

Evan suffers from a multitude of physical problems as a result of being violently shaken as a four-month-old in 2007 by an individual or individuals who have never been charged.

Those who were under investigation at the time was the son of Preston’s husband’s (Shawn Liddick, pictured below with Evan and Preston) first marriage and his son’s wife. 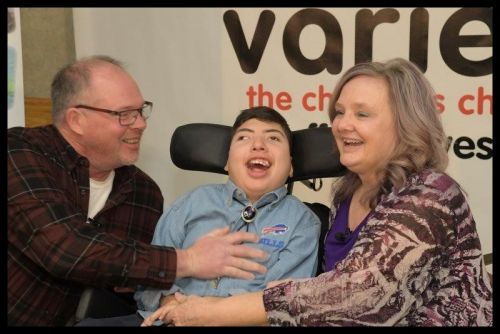 Preston and her husband traveled to Arizona where she said doctors detailed Evan’s prognosis and revealed the fact “that they didn’t expect (Evan) to live.”

“We were asked ‘if we had any interest in becoming foster parents,’” Preston said.  “When I flew out and saw him, ‘there was no doubt in my mind that we were taking this baby.’  ‘I could not have lived with myself’ (making any other decision).  ‘I knew this is what I had to do.’”

Preston, who has three grown children of her own, and Sean - who has three sons, began what she described as a “learning process” when it came to taking care of Evan’s special needs.

“He was being fed through a tube and that first week (after getting Evan home) ‘the tube came out,’” Preston recalled.  “I ‘thought they were going to take him away from us.”

Over the years, Preston and her husband found their way in taking care of Evan, as well as providing him with a life that doctors had initially predicted he would never live.

“Evan, who will be fourteen in May, is at the Aspire Center for Learning (in Suburban Buffalo), ‘which is a wonderful school that deals with kids with special needs and makes it possible for him not to be in a wheelchair all day,’” she said.

“Special needs kids ‘have different’ milestones.  Evan’s ‘still working on sitting for a minute or two without tipping over.’  ‘That’s a milestone for him.’  While he ‘does not have any meaningful movement, he does have the capacity to learn.’  He wears glasses because he has a vision impairment (due to being shaken).  His eyes were ‘damaged.’  ‘But you can tell by his look, when he focuses, he can actually see - and that’s a milestone,’” Preston said.  “While he ‘cannot walk or talk or feed himself, he’s adapted.’  ‘It’s been accepting your child with the fact he will never be able to do that, but every year - we see a change, no matter how subtle.’  He’s a ‘typical’ boy.  He’s ‘happy all the time.’  ‘And while he’s non-vocal, he’s always smiling.’”

Preston is hoping the role Evan will play in this year’s Variety Club Telethon will call attention to Shaken Baby Syndrome: “We ‘want people to see him, what can happen to a vibrant baby when this is done to them.’  ‘But it’s never been about what we can’t.’  ‘Our goal is to do what we need for Evan so Evan can.’  (For example, she and her husband) installed a car seat swing in our kitchen ‘so he can swing just like any kid would.’”

Variety Club Executive Director Richard Goldstein too hopes Evan’s appearance works to make a difference: “We ‘have to realize the ramifications of (of Shaken Baby Syndrome) and that you don’t give up on these children - and that’s what (the) Variety (Club) is all about.’”

Added Vaccaro (pictured below at pre-telethon fundraising event with Evan, his family and others inside the Walden Galleria): “(Evan) was four months old when he was shaken ‘and despite how challenging it would be, (Preston and her husband) adopted him at the age of one.’  Now he’s thirteen.  He needs (24/7) care.  He’s in a wheelchair.  He’s blind.  He has CP (Cerebral Palsy).  He’s fed through a tube.  ‘But he is just a joy, always smiling and laughing.’  ‘He has an infectious smile and he is fortunate to have two loving grandparents’ (who made a decision to care for him).” 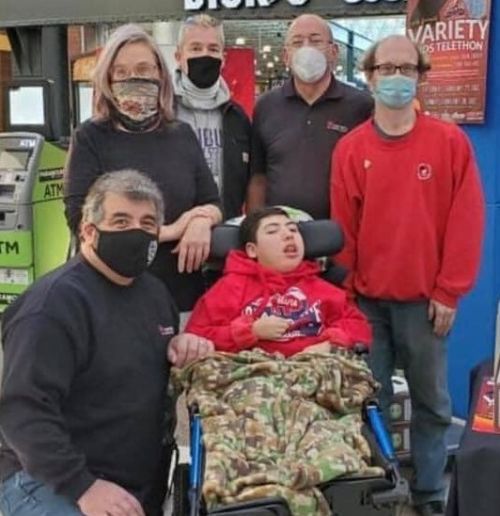 Goldstein is hopeful, despite the Coronavirus Pandemic and its impact on how we live our daily lives these days that the Variety Club Telethon will come close to hitting its annual $1 million goal - but he realizes it could be less than that.

“Because of COVID, ‘if we get half of that, it would be a miracle,’” he told WNYLaborToday.com.  “But ‘every’ dollar ‘is significant, no matter how much we raise because the kids here in Western New York still need help.’”

The role Organized Labor plays in the annual Telethon is not lost on Goldstein, who heaps praise on the Unionized Working Men and Women of our region: “Every year, ‘here they come.’  ‘It’s significant, because first and foremost - their (donated) dollars stay here.’  The Unions ‘have always been (100%) behind us.’  ‘They are part of the fabric of the telethon.’”

In regards to Vaccaro and the visual relationship he sees with the Teamster Rep and the Telethon’s Celebrity Child, Goldstein said: “As ‘much as he loves Labor, he loves this child.’  Tony’s ‘a human being first - and you can see it’ (this year with Evan).  ‘You don’t see this every year.’”

While the Variety Club Telethon will not be allowed to have as many volunteers and staff in place on site throughout its televised segments as it has in the past, there will be a 20 Labor Representatives participating – which was allowed after consulting with the Erie County Department of Health, to man the phones and take donations from 6 p.m. to 10 p.m. on Saturday and again from 10 a.m. to 1 p.m. on Sunday.

In addition, on Sunday - between 1 p.m. and 2 p.m., a number of Labor Representatives will appear at the televised telethon to personally make their Unions’ donation. 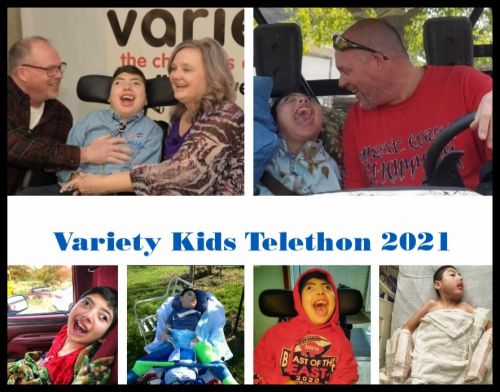 As many as 10 Unions, with one or two representatives each, will rotate in and out to make their donations in order to meet COVID protocols.

Said Vaccaro: “For years, Unions ‘have done their own thing.’  But ‘I believe we’ve brought together a Union of Unions that will come on as one and really be able to make a splash.’  We’ve been shut down for a year (because of COVID), ‘missing things’ - like going out to dinner.  ‘Our lives have been turned upside down, but what hasn’t change are the needs of these kids.’  ‘We’re asking people to give what you can and support this great cause.’  (Labor’s) ‘always been there’ (to help), ‘but now we’ve come together as a (Union) coalition.’”

Preston told WNYLaborToday.com that after some research, she was amazed to discover the great amount of generosity shown by her Union, the Teamsters, as well as so many other Unions and their Members across Western New York who donate yearly to the Variety Club Telethon.

“Very much so,” she answered when asked if she was surprised.

“I’ve ‘always been a proponent of Unions.’  My parents were Teachers ‘and I recognize what Unions have done for the kids through the Variety Club.’  ‘I looked at the Variety Club’s Union Donation List and all the local Unions that participate - I was just floored,’” Preston said.

WNYLaborToday.com Editor’s Note: A couple of the photos that appear with this Labor News Story were provided to WNYLaborToday.com by International Union of Painters & Allied Trades (IUPAT)/District Council 4 Representative William Mayer via the Social Network Facebook.