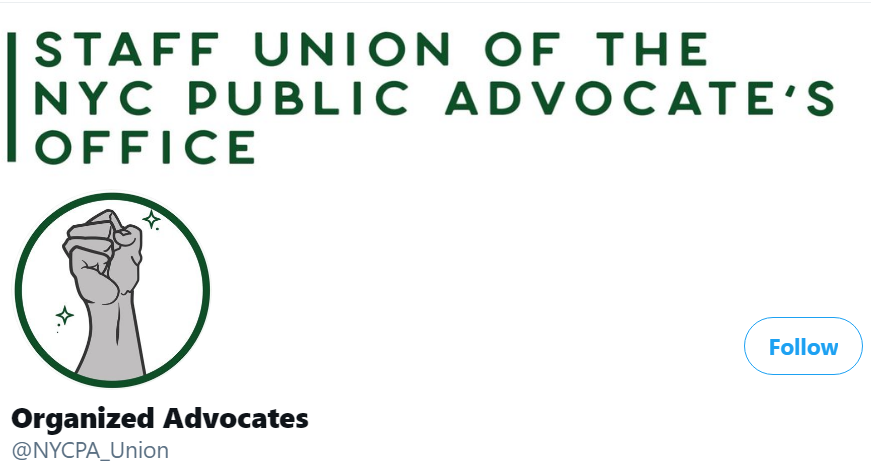 The group is part of the larger Campaign Workers Guild (CWG).

“From the beginning of this process, I’ve been proud to support the Unionization effort and look forward to the next steps in ensuring fair representation,” Williams said. “Our office has been committed to advancing the cause of Worker justice throughout the city since I was first elected to this position two years ago, and it is crucial to reflect those values within our own workplace as well.”

Alex Liao, 25, a Policy Associate at the Office of the Public Advocate, is excited about the new recognition.

As one of the Organizers on the Executive Council of the CWG, he’s worked tirelessly to get the OASU officially recognized.

“It feels great to be recognized,” said Liao, who is one of 42 Staff Members in the Union. “It’s a real win for the Staff and all the work that we have put in.  We have been organizing together now for a year in the midst of a pandemic.  We are looking forward to heading to the bargaining table.”

They had a super-majority in October, according to Liao, who was also responsible for helping to draft reports, letters and testimonies for the public advocate.

“They make up the non-managerial and the non-Human Resources folks that have access to sensitive information,” Liao said. “These are folks in our Policy Department, our Legislative Department, Community Engagement, Constituent Services, our Tech Team and our Administrative Team that are not senior-level staff.”

The Office of Labor Relations (OLR) was a designee since October 2020 for OASU and filed a petition of voluntary recognition to the Office of Collective Bargaining (OCB) on behalf of the public advocate on February 18th.

“We are going to be heading into bargaining after that recognition,” said Liao, who joined CWG in 2018 while working on a Congressional campaign in Miami.

“We want to bargain for the conditions that we believe we deserve in the workplace,” he said.

The Campaign Workers Guild was founded in 2017, and represents Workers on political campaigns, state parties, non-profits and political consulting firms.

It advocates for higher wages, sustainable work schedules and enhanced safety protocols from sexual harassment on the campaign trail.

Sick days, health coverage, personal days, basic Labor protections and a respectful, inclusive work environment are what the CWG Members are advocating for Staffers across America.

To Directly Access This Labor News Story, Go To: www.laborpress.org/nyc-public-advocate-welcomes-unionization-in-his-own-office/