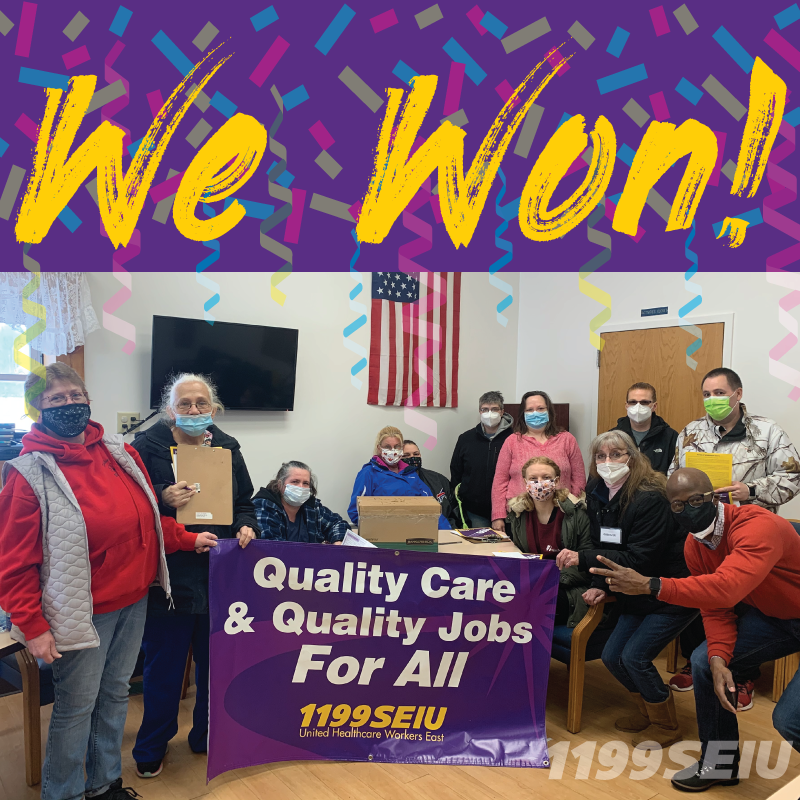 (WELLSVILLE, NEW YORK) - Following a three-day Strike last year, Wellsville Caregivers won a three-year contract that included 6.75% wage increase.  This week, the more than 55 Nursing Home Workers who are employed at Highland Park in Wellsville - and who are also represented by 1199 Service Employees International Union (SEIU) United Healthcare Workers East, voted to ratify their first Union contract, ending a very lengthy Labor dispute with the out-of-town/for-profit nursing homeowner that began back in July 2018.

In addition, Workers will now receive sick and personal days, increased employer provided contributions to their retirement, designated holidays, and an increase in vacation accruals.

And, Workers will now have access to the grievance and arbitration process when issues arise in the workplace.

The Nursing Home Workers were excited about their first Union contract.

“I am overjoyed we have come to an agreement.  I am looking forward to the positive changes coming our way,” CNA Ruby Horning said.

“I am so happy to get a contract signed!  It’s been a long time,” CNA Beth Little added.

1199 SEIU Vice-President Tracey Harrison said: “This contract settlement could not have come at a better time.  Many Staff have expressed their concerns regarding staffing mandating and the need to increase the amount of time needed to provide quality patient care.  Workers are confident that their contract will provide them the opportunity to address a lot of those concerns that impact patient care.”

In September, Caregivers held a three-day Strike at the facility in Wellsville after negotiations for their contract broke down.  Shortly after their Strike, Workers complained of unfair labor practices and the Union filed 11 serious Labor Board charges - including wrongful termination, discrimination, unsafe work environment, retaliation and refusal to bargain.

“It’s been an exhausting thirty one months.  We lost a lot of good Employees through the fight, but hopefully some will come back now that we have a good contract in place.  We have a voice in the workplace when things go wrong.  Now they have to listen to us!  We’ve been through hell, but it was all worth it!  We stood together, through it all and now we know we can do it and the next time, we will be ready,” LPN Cindy Costello said.

1199 SEIU United Healthcare Workers East - whose mission is to achieve quality care and good jobs for all, is the largest and fastest-growing Health Care Union in America, representing more than 400,000 Nurses and Caregivers throughout the states of Massachusetts, New York, New Jersey, Maryland and Florida, and in Washington, D.C.