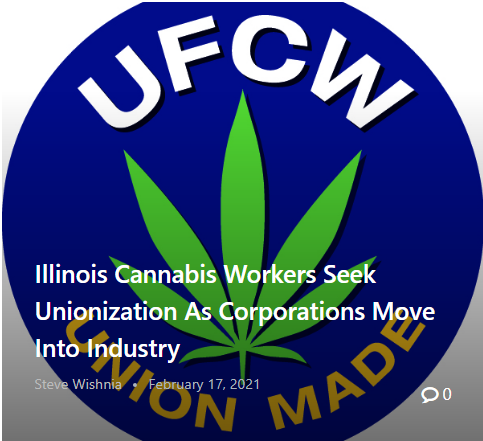 (CHICAGO, ILLINOIS) - Eric Craddock, 36, had to do a Google search to learn about Labor Unions.  Craddock thought he’d landed his dream job when he got hired by the Ascend Cannabis Dispensary in Springfield, Illinois, when it opened last March.  He worked mostly in the basement vault, handling inventory and was thrilled to be making a living with “this thing we always shouted should be legal.”  He says he’s never been as close with his Co-Workers at any other job.  But the way he was treated soured that dream.

When he had to have emergency surgery and was out for three weeks, management refused to give him any paid sick days, he says.

The company was secretive about Workers being infected with the COVID-19 virus.

The last straw came the Monday before Thanksgiving, when the store’s Workers were abruptly informed that it would be an unpaid day off, not a paid holiday.

Management has also gradually shaved their hours, from about 36 or 37 a week to 30 - a significant loss when most are paid $15 an hour.

His Google search led him to United Food & Commercial Workers (UFCW) Local 881, which has been organizing Workers in the Illinois cannabis industry since the state legalized sales to adults for non-medical use in January 2020.

He and a Co-Worker, Jon Calvin, got two-thirds of the 41 Workers to sign Union Cards within two weeks.

In December, Workers at the Cresco Labs Cultivation Center in Joliet ratified their first Union Contract.

At Windy City Cannabis, also in Chicago, ballots for the Union vote will go out on February 25th and will be counted on March 22nd.

The Ascend Workers in Springfield are waiting for the National Labor Relations Board (NLRB) to schedule an election.

“The conditions are very similar,” Local 881 Organizing Director Moises Zavala said. “The Employees like what they do, but they do not feel that the companies are treating them like the professionals they are.”

The Illinois Union Campaign is coming up against the increasing corporate domination of the cannabis industry, as it expands rapidly and becomes less legally risky.

Cultivation and sale of marijuana are still serious felonies under Federal Law, but adult use is on its way to being legal in 15 states - plus Washington, D.C., and medical use is permitted in 36 states, Washington and Puerto Rico.

The Federal Government has largely abstained from raiding state-licensed operations since 2012, when Colorado and Washington State voted to legalize sales to all adults, and President Barack Obama realized that he needed to carry Colorado to win re-election.

Under Federal Law, a cannabis enterprise having a bank account or taking credit cards is considered money laundering.

Still, the chains are seeing a very green future, in both the agricultural and financial senses.

In Illinois, five to seven chains now own most of the 82 licensed dispensaries, says Jake Lytle, 22, a Worker employed at Windy City Cannabis in Chicago.

To Continue Reading This Labor News Story, Go To: www.laborpress.org/illinois-cannabis-workers-seek-unionization-as-corporations-move-into-industry/