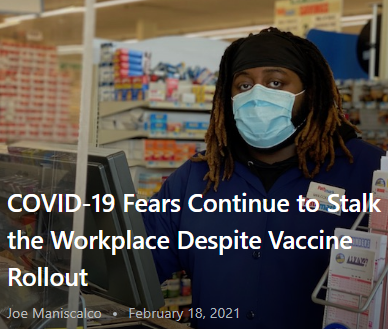 (NEW YORK CITY) - The Trump Administration’s failure to develop a plan to distribute COVID vaccines, along with persistent problems with the current rollout, are spreading fear among American Workers forced to risk exposure to the killer virus without Federally-enforced Workplace Safety Standards.

“I don’t feel safe,” Phil Andrews, a Petco Dog Groomer in Miami, Florida, said. “I don’t feel that the companies have our backs.  I don’t look forward to going in.”

Some 200 cases of the pernicious British variant of COVID-19 have been confirmed in the Sunshine State.

Other variants, including problematic ones from Brazil and South Africa are also spreading fast in America.

Public Health Officials worry that pernicious and highly infectious mutations will spread faster than Americans are vaccinated because of the Trump Administration’s failure to create a plan to get vaccines into people’s arms.

The stress and anxiety of having to interact with customers all day without vaccination or adequate Personal Protection Equipment (PPE), such as masks and gloves - has made life small for TJ Daniels, a Petco Employee in Colorado.

“I’m going to work and heading home so I don’t have to deal with any more people than the hundreds I have to see at work,” he says.

Daniels expects he’ll have wait until Summer to be vaccinated.

So far, the distribution of vaccines seems not to align with essential worker risks.

In New York City, where People of Color dominate in health care and other essential services jobs that come with the greatest risk of infection, White People account for 48% of the 300,000 vaccine shots administered thus far.

Whites are less than 43% of the city population and their share of jobs at high risk of infection is lower, illustrating the structural racism in fighting the virus.

Transit Workers are among those most at risk.

The Metropolitan Transit Authority (MTA) in New York recently began posting an ongoing memorial throughout the transit system honoring 136 Bus Operators, Conductors, Motormen and others the virus has killed so far.

Some MTA Workers have long contended that the agency failed to stress the importance of PPE during the early days of the pandemic.

Others, including Jersey City Train Operator Hannington Dia, say their Union let them down.

“We asked for protection,” Dia said at a Tax The Rich Rally at Zuccotti Park in January, site of the 2011 Occupy Wall Street demonstrations. “We asked for masks at that point when it got really bad in March.  But you know what the Union said?  They basically parroted management’s line.  Management said that since the CDC (Centers for Disease Control) said we don’t need masks, we’re not going to give them to you.  We wanted to be secure and we told the Union and the Union did nothing but parrot their goddamned lies.”

TWU Local 100 President Tony Utano, however, says the Union has been at the forefront of safety throughout the pandemic and that Dia is simply wrong - and his anger, misdirected.

“While the MTA mishandled the pandemic in the early stages, TWU Local 100 fought and pushed them on the issues of masks, work rules, cleaning -you name it,” Utano told LaborPress.org in an e-mail.

“The Union even went out and obtained tens of thousands of masks during a global shortage and started distributing them before the MTA did,” he wrote in the e-mail

According to Utano, some 20,000 at-work COVID-19 tests have successfully identified hundreds of asymptomatic Workers and more than 5,000 Transit Workers have been vaccinated.

To Read This Labor News Story In Its Entirety, Go To: www.laborpress.org/covid-19-fears-continue-to-stalk-the-workplace-despite-vaccine-rollout/